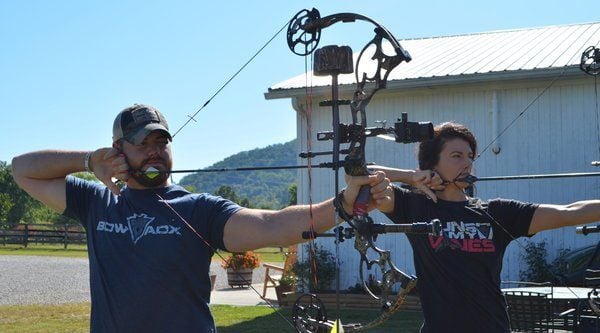 The couple practice and train constantly together, working out as much as five to six times a week. | Photo by Jarrod Mills 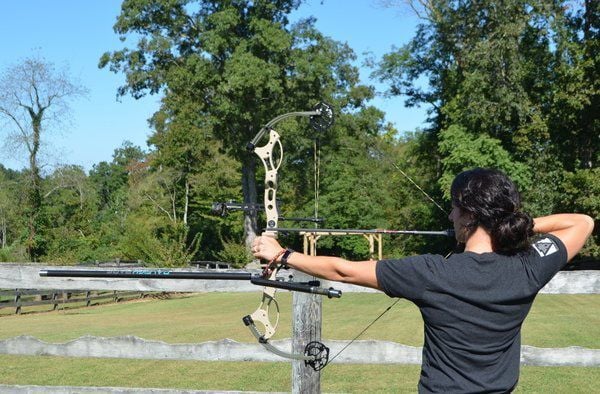 Sarah Perkins lines up her bow for a practice shoot. | Photo by Jarrod Mills 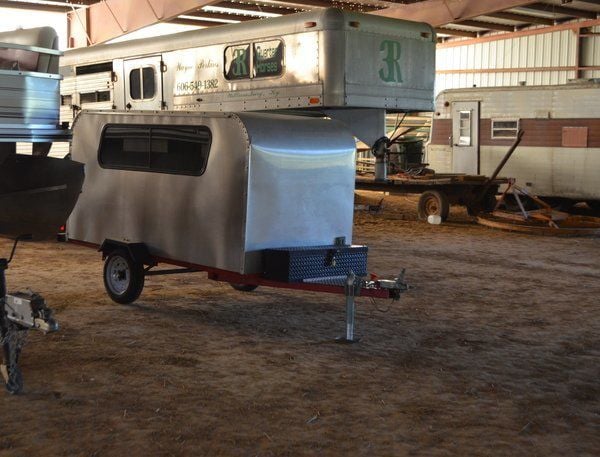 The mini camper the couple sleep in while away at tournaments. | Photo by Jarrod Mills 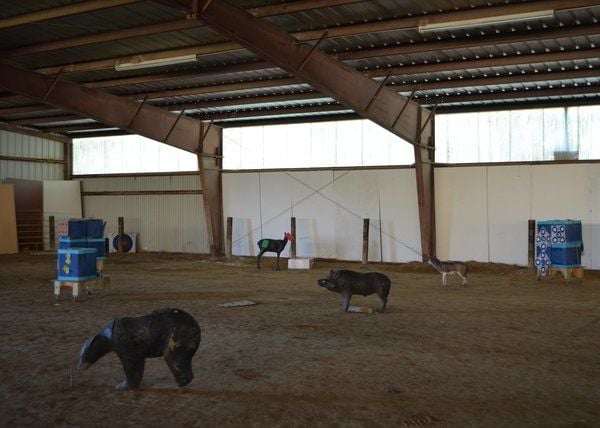 Inside 3R Arena where the couple practice and train during days with bad weather. | Photo by Jarrod Mills 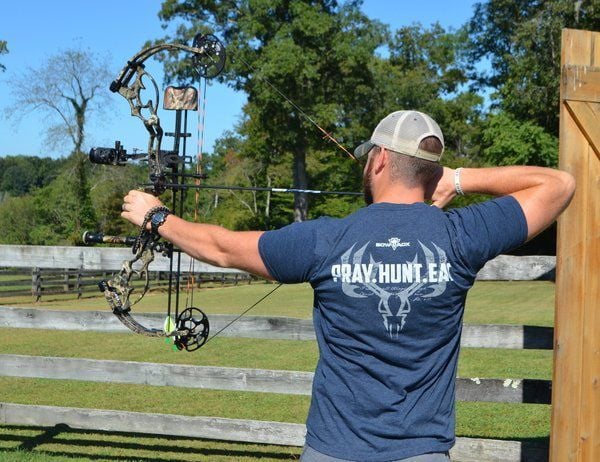 Cody Perkins aims for the target in a practice shoot. | Photo by Jarrod Mills 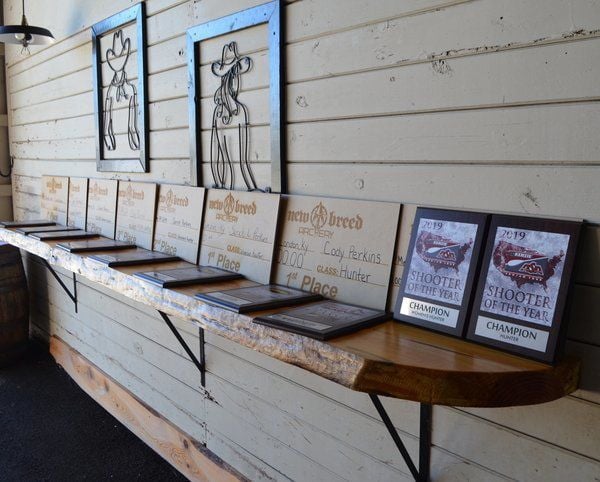 Many of the accolades and trophies won by the couple this past season. | Photo by Jarrod Mills 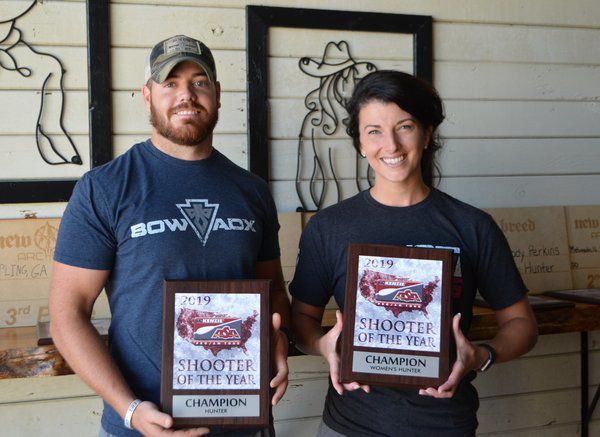 Cody and Sarah Perkins were named ASA's 2019 Shooter of the Year in their respective classes. | Photo by Jarrod Mills

The couple practice and train constantly together, working out as much as five to six times a week. | Photo by Jarrod Mills

Sarah Perkins lines up her bow for a practice shoot. | Photo by Jarrod Mills

The mini camper the couple sleep in while away at tournaments. | Photo by Jarrod Mills

Inside 3R Arena where the couple practice and train during days with bad weather. | Photo by Jarrod Mills

Cody Perkins aims for the target in a practice shoot. | Photo by Jarrod Mills

Many of the accolades and trophies won by the couple this past season. | Photo by Jarrod Mills

Cody and Sarah Perkins were named ASA's 2019 Shooter of the Year in their respective classes. | Photo by Jarrod Mills

WILLIAMSBURG — Cody and Sarah Perkins are Williamsburg natives who have recently been named Archery Shooters Association’s Shooter of the Year in their respective classes.

The couple’s entry into archery was a bit different than most. Both Sarah and Cody started shooting in 2016 when a couple of their friends invited them to try it out.

“They were like ‘hey you want to try this bow, it’s pretty fun’ so I shot my first bow. It’s the one Cody shot with forever, it’s pink,” Sarah laughed.

Their new hunting technique also allowed an opportunity for the couple to participate in the extended hunting season.

“It’s hard to stock your fridge in two weeks, especially with our work and school schedules,” Sarah noted, referring to the short timeframe allowed for gun season.

Cody works full-time at nights while Sarah is finishing her double major at the University of the Cumberlands, majoring in public health and exercise sports science.

The couple’s first competition was the 2017 London Pro/Am: Tournament in London.

“They have a big shoot in London, Kentucky. It’s right around our anniversary date. So we just decided to do that together to celebrate our anniversary that year, and we just fell in love with it,” Sarah said.

Having come from a hunting background, the couple faced some adversity during their first competition.

“Everybody who has a bow and shoots in their backyards thinks they’re the best in the world until you go to one of these and get spanked, as we did in our first [tournament],” laughed Cody. “It was a bright sunny day. People are walking around with umbrellas and binoculars. I’m like ‘the target is what, 30 yards away? Why do we have binoculars?’ I didn’t realize you couldn’t see the scoring rings from 10 feet away.”

The competition didn’t go exactly to plan, but both archers admit that participating in their first tournament is what made them fall in love with the sport. Since then they have competed in numerous events, traveling around the country with their mini camper in tow.

This season was different for Sarah and Cody. With two seasons under their belts, the couple were aiming to win the very tournament that started it all. Sarah won her class by 8 points, and Cody won his by 11 points.

“We were so happy. We both wanted to win our home state," Sarah said.

“We had just found out we were both first in the nation, and we wanted to celebrate,” said Sarah. The couple went out on their motorcycle as a way to celebrate when they were in an incident that jeopardized Sarah’s chances at competing in the last event of the season. “We hit a deer on our motorcycle, and it wasn’t looking good for my right hand at all. I crushed my right hand, and did some damage to my right leg.”

After the incident Sarah recalled being scared to shoot again. She said she had concerns on her ability to pull the bow back. Once she realized she was able to pull back the weight of the bow, she was determined to participate in the last event of the year, the 2019 McKenzie ASA Classic IL Pro/Am Tournament in Metropolis Illinois. She had only had her cast taken off two days before the competition began.

Both Sarah and Cody had to participate in this tournament if they wanted to be considered for the Shooter of the Year award, even if that meant Sarah would just shoot her 40 arrows and score a low score. Sarah had just a one point advantage over second place going into the last event.

After the first day of the competition the couple had checked the standings, and found that Sarah had lost the lead by one point. That all changed the next day where Sarah said she felt more calm, and focused.

“The next day I was real relaxed. I guess I was more thankful that I could shoot my bow than I was worried about winning.”

Sarah finished second place in the tournament, but ended up winning Shooter of the Year by 7 overall points.

“I beat Cody that weekend,” Sarah said with a laugh. “It’s been my goal all year to beat him.”

Shooters are placed in shooting peer groups during competitions. Cody was shooting with the archers in second and third place.

“That was a benefit,” Cody admitted. “I knew I just had to stay at least 24 points ahead of them.”

Next season Cody will participate in the K-50 division and Sarah will compete in the K-45 division. The new divisions will bring new and better competition, targets at a farther distance, and a new bow set up which will provide a challenge.

“This year we could play it smart, and I knew about what it would take to win. Next year there is no playing it safe or smart. If you miss a shot, then it’s basically game over,” Cody said.

The couple also run an archery coaching/training program called Archery Perks. Their primary clients at the moment are generally children, family members, and those who know them personally. This is a benefit at the moment, with their busy school and work schedules the couple admit it can be hard to do balance it all.

Ultimately, Cody hopes to continue to work on his archery resume, turn pro, and be able to focus on Archery Perks full-time.

Cody and Sarah also use archery as a way to connect with people spiritually. The couple are religious and say that they give all credit and success they have earned to God. They are also very appreciate of the support system they have made up of friends and family. “We have to give a special thank you to Jennie Richardson, she’s helped us out more than anybody,” said Cody.

Richardson is the S3DA Executive Director where the couple work part-time. “All archery in this area, she has something to do with,” said Sarah.

When asked what advice they would give to those first getting into archery the couple said the main thing to focus on is consistency. New shooters should be consistent in how often they practice, and be consistent in the way they practice. They also want to encourage those starting out, especially kids, not to be scared to shoot.

Sarah said “it can be scary, but you can’t be scared. You’ve just got to get out and practice.”

The couple are encouraged by the rate of popularity in which archery has seemed to grow to in this area. They credit folks like Richardson, and programs like S3DA and the National Archery in Schools Program (NASP) as to the rise of archery in the Tri-County.

“Archery is the coolest sport in the world,” Cody said. “It’s the only one where they give you off for hunting season.”