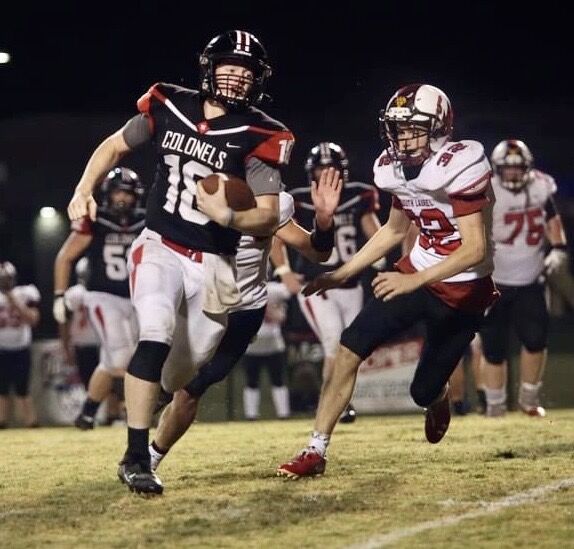 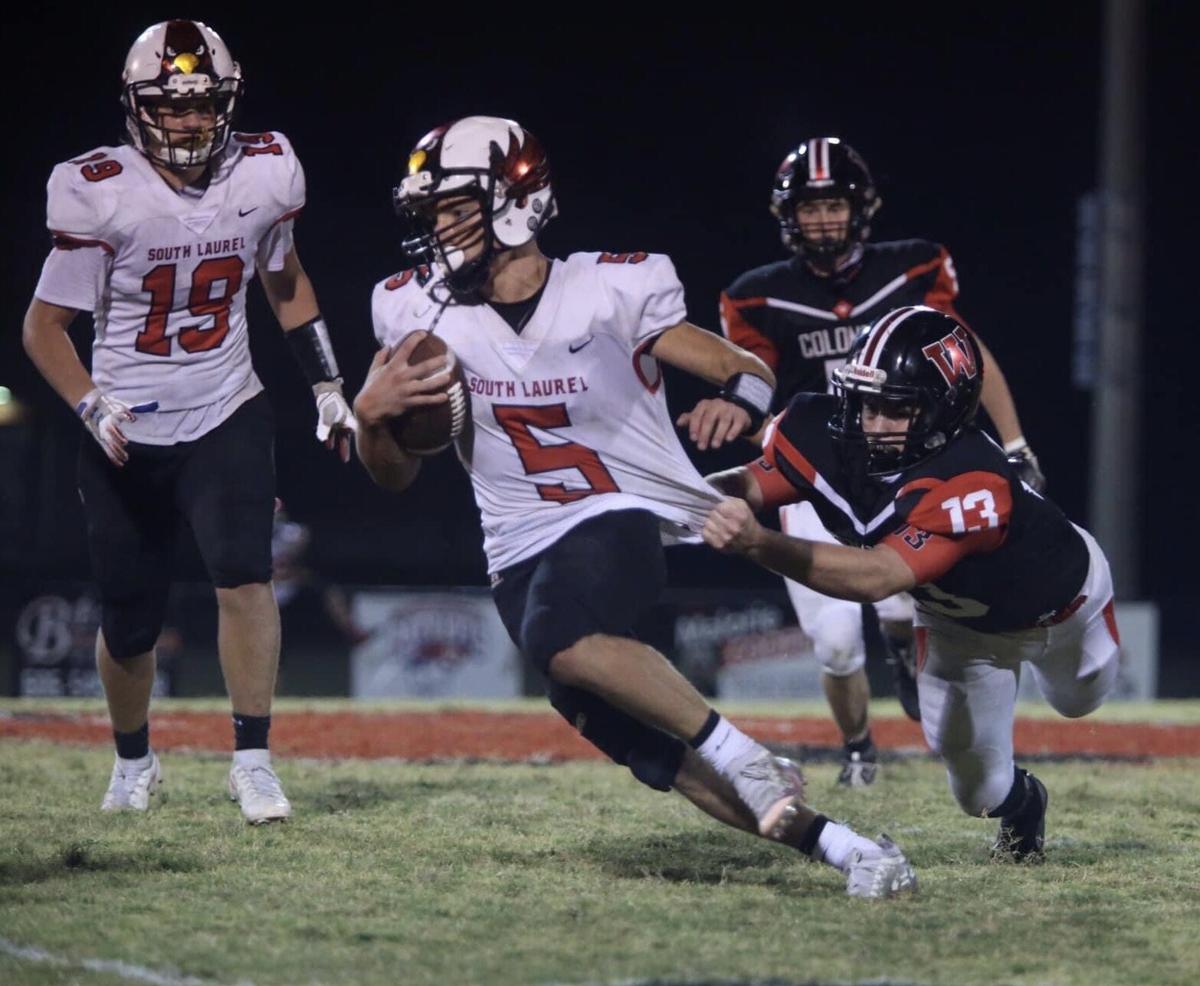 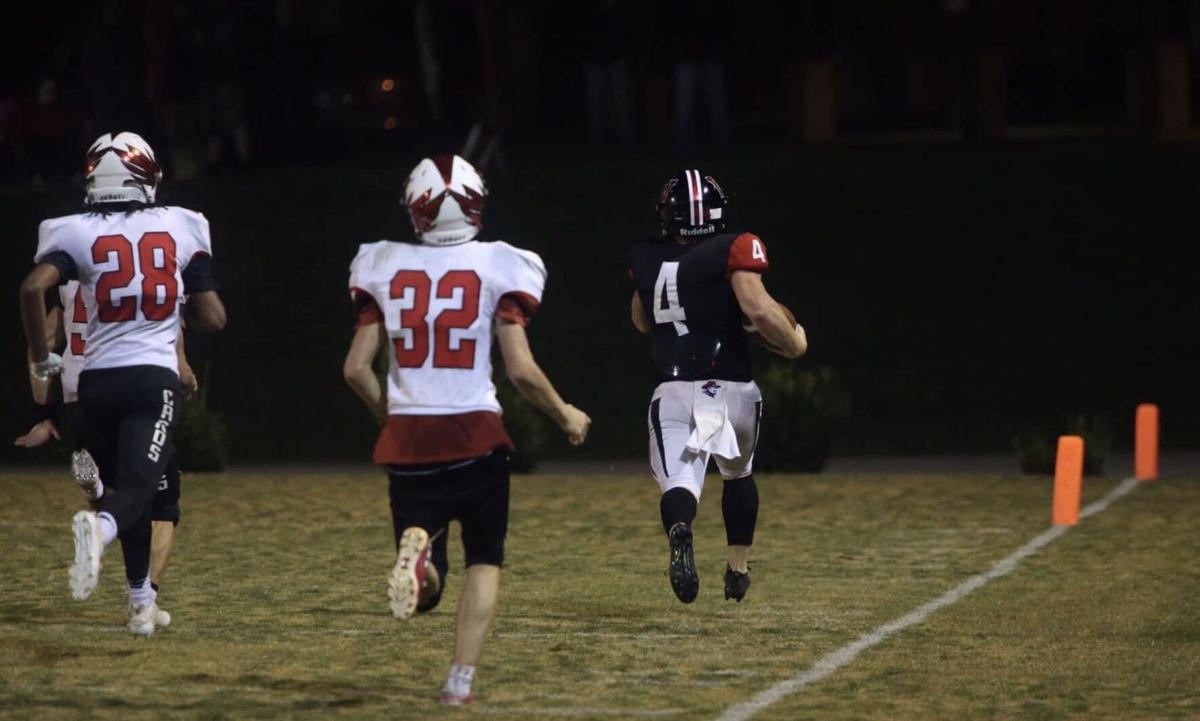 Whitley County’s Woody Lawson was hard to handle on Friday night. He ran for 195 yards and three touchdowns during the Colonels’ 69-30 win over South Laurel.

Whitley County’s Woody Lawson was hard to handle on Friday night. He ran for 195 yards and three touchdowns during the Colonels’ 69-30 win over South Laurel.

WILLIAMSBURG — Jep Irwin’s Whitley County Colonels look to be hitting on all cylinders at the right time.

After scoring only 57 points during the first four games of the season, the Colonels have now scored 99 during the past two weeks, including Friday’s 69-point output during their 69-30 win over South Laurel.

“We had the ball seven times in the first half and scored five times. I was pretty pleased with the offense,” Irwin said. “We were able to keep the lead, and it was a good team win and now we are focusing on Hazard.

“We played a tough schedule early on but I think it prepared us,” he added. “I’m proud of the team hanging in there. I think we are hitting our stride on offense. We are young and getting better.”

The 69 points are the most Whitley County has scored since totaling 71 points Against Montgomery County way back on Oct. 3, 2003.

The Colonels (2-4) also locked up District 8’s No. 3 seed while improving to 2-2 against district opponents.

South Laurel’s struggles continued on Friday despite staying close with the Colonels during the first half.

The loss dropped the Cardinals to 0-7 overall and 0-4 against district opponents while eliminating Donnie Burdine’s squad from postseason play for the second straight season.

“I’m kinda bummed out,” Burdine said. “We thought we could beat them and in the first half, it looked like we had a chance to do that. We just didn’t have any offense in the second half.”

South Laurel has now allowed 364 points on the season while the 69 points turned out to be the most a Cardinal team has allowed since giving up 80 points against Bell County last season.

Burdine’s squad led 16-14 with 10-14 remaining in the first half thanks to two touchdown runs by quarterback Dylan Burdine.

A touchdown run by Woody Lawson gave Whitley County a 22-16 edge before seeing Brenton Willoughby’s 62-yard touchdown run at the 7:21 mark tie the game at 22 apiece.

Lawson’s touchdown run with 4:58 remaining gave his team a 28-22 lead while another rushing touchdown pushed Whitley County’s advantage to 34-22 with 1:36 remaining in the half.

The Cardinals were driving to cut into the Colonels’ lead but instead, a game-ending injury happened to Dylan Burdine right before the half.

““We had a 16-14 lead early in the second quarter and we weren’t playing too bad defensively,” Burdine said. “We started seven or eight sophomores and freshmen on the defensive side of the ball, and they played good during the first half.

“We were driving to cut their lead to eight right before half and then we lost Dylan,” he added. “He’s hurt bad, and wasn’t able to play in the second half.”

Whitley County was able to put the game away by scoring three unanswered touchdowns in the third quarter, increasing its lead to 55-22.

Caden Petrey scored on two rushing touchdowns (3 yards and 20 yards) and also threw a touchdown (33 yards) during the quarter.

Lawson’s 62-yard touchdown run capped off the scoring in the fourth quarter for Whitley County while securing the 39-point win.