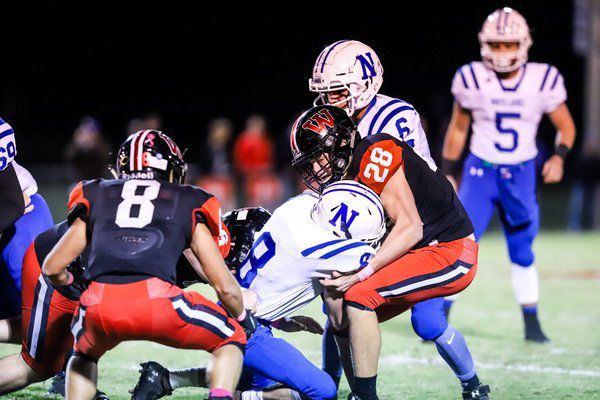 North Laurel held a 22-7 second-half lead before seeing Whitley County rally to a 28-22 victory during the two teams' first meeting on Oct. 17. | Photo by Dylan Wilson 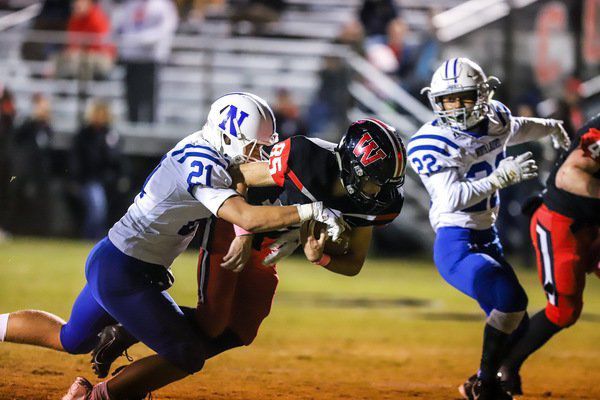 Caleb Irwin and the Whitley County Colonels will face district rival North Laurel today during first-round action of the Class 5A playoffs. The two teams hooked up in a classic just a few weeks ago with the Colonels rallying to pick up a 28-22 win. | Photo by Dylan Wilson 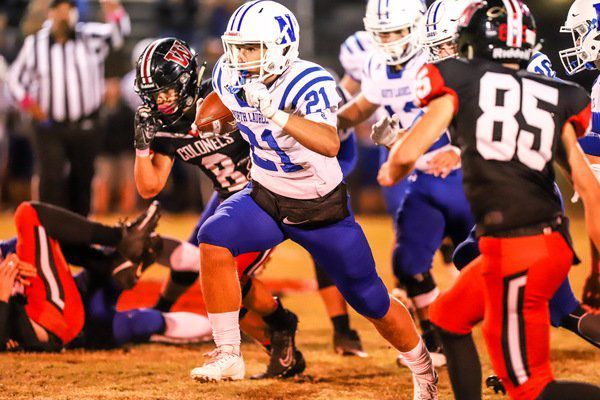 North Laurel held a 22-7 second-half lead before seeing Whitley County rally to a 28-22 victory during the two teams' first meeting on Oct. 17. | Photo by Dylan Wilson

Caleb Irwin and the Whitley County Colonels will face district rival North Laurel today during first-round action of the Class 5A playoffs. The two teams hooked up in a classic just a few weeks ago with the Colonels rallying to pick up a 28-22 win. | Photo by Dylan Wilson

WILLIAMSBURG — Less than a month ago, North Laurel and Whitley County hooked up in an instant classic at Colonel Stadium that saw the Colonels rally from a 22-7 second-half deficit to come back and beat the Jaguars, 28-22, during the game’s final seconds.

Home field advantage was on the line during the first meeting, but a whole lot more is at stake when the two teams meet today during first-round action of the Class 5A playoffs — the winner advances, while the loser’s season will come to an abrupt end.

“I think we are ready to go. We’ve been working on Whitley for a while now,” North Laurel coach Chris Larkey said. “We want the rematch. It’s going to be a tough game, but win or lose, we want to go out and play.

“I think this should be a good competitive game,” he added. We have got to keep them from scoring a whole lot. If they get on us, I hope our kids can respond.”

Larkey’s Jaguars (5-5) will be going against a Whitley County squad that has improved each week since opening the season with a 35-21 loss to Corbin.

The Colonels (7-3) are currently riding a five-game win streak, and coach Jep Irwin hopes his team will continue its recent success today against North Laurel.

“I am pleased with how we have grown and improved during the season and have responded to the adversity of the season,” he admitted. “We are peaking defensively and have played very well except for about three possessions on defense against South Laurel. Offensively, we have had some big plays but have not run the ball as effectively except for the second half of the South Laurel game.

“We need to get back to running the ball and mixing in some passes,” Irwin added. “We aren't built to just drop back and throw it 30 times a game. Hazard was a very good opponent and a good matchup for our last regular-season game. They were big and physical like North Laurel and well-coached. We wanted to get the seniors a win on senior night and finish the regular season well. I think our regular-season record is something to be proud of and a strong legacy for the seniors in that they helped return our program to winning ways.“

Both coaches agree their respective teams are in for a battle today.

“They’re a good team,” Larkey said. “We feel like we are a good team, too. We just can’t make mistakes like we did the first game. We let one get away, so now we will try to make up for it this time around.

“We know it’s going to be tough, especially with it being played on the road,” he added. “We just need to make sure to sustain drives and not commit turnovers or penalties.”

“I would say we are (both) are similar teams and evenly-matched,” Irwin said. “We want to learn from the first game and play better, but it is a whole new game and what happened last time isn't necessarily going to repeat.

Larkey said the key for his team is to make sure to put the game away if it can get a lead against the Colonels.

“Our kids knew they had the game won last time we played,” he admitted. “That was a tough loss, but there isn’t anything we can do about it. We have just been focused and working to get ready this week. We had a turnover and then blown coverage that cost us at the end of the game. We gave them some gifts, and hopefully, we don’t give them any more.”