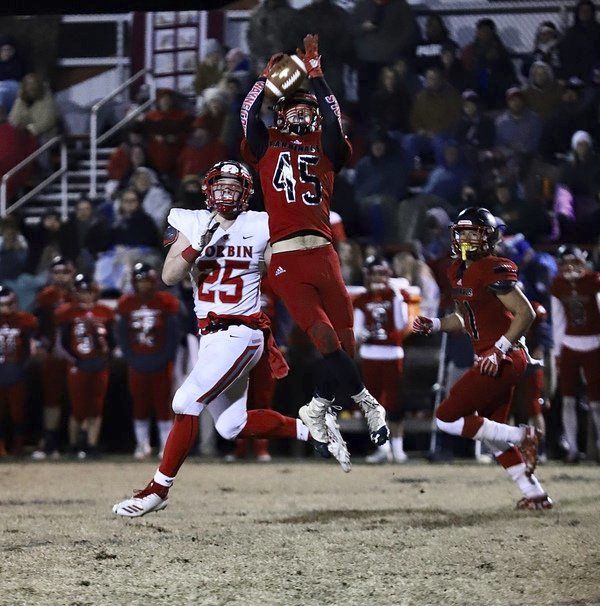 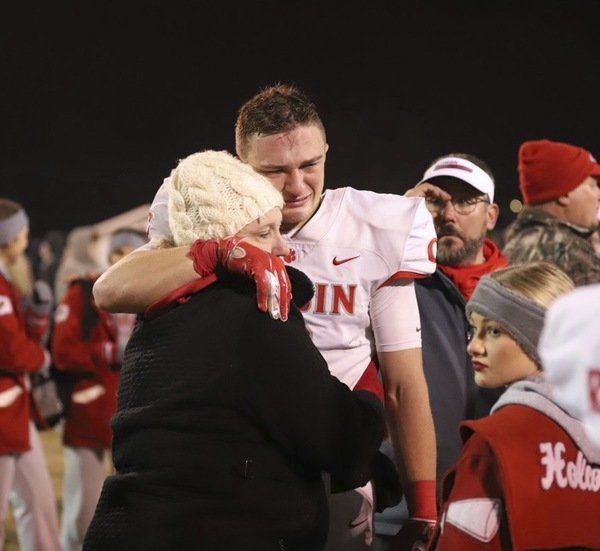 Senior Cole Shelton is consoled after playing in his final game for the Corbin Redhounds. | Photo by Darrin Spencer 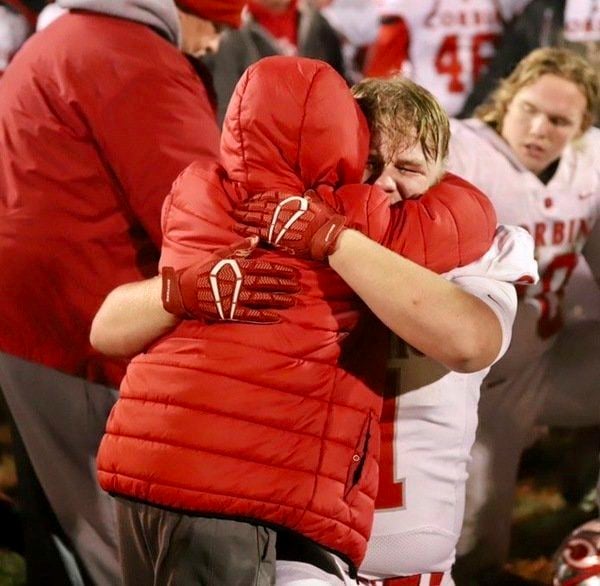 Corbin senior Noah Orr receives a hug from a fan after Friday's loss to Wayne County. | Photo by Darrin Spencer 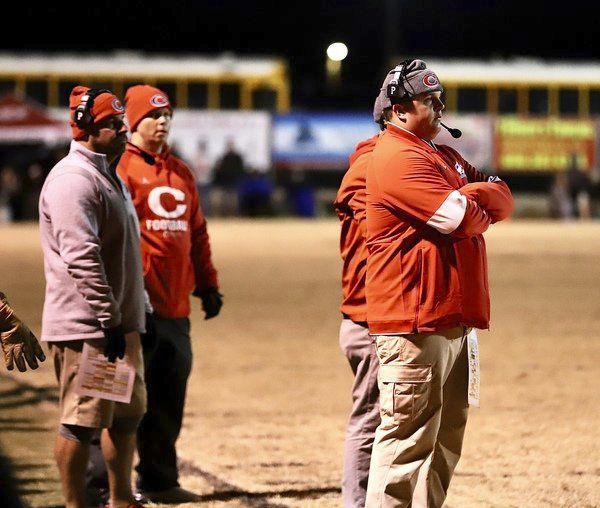 Senior Cole Shelton is consoled after playing in his final game for the Corbin Redhounds. | Photo by Darrin Spencer

Corbin senior Noah Orr receives a hug from a fan after Friday's loss to Wayne County. | Photo by Darrin Spencer

MONTICELLO — The combination of Wayne County’s Braedon Slone and five turnovers led to Corbin’s 63-49 loss to the Cardinals during Friday’s Class 4A, District 7 championship.

“He’s a special player,” Corbin coach Justin Haddix said of Sloan. “He made some plays tonight. When we hit him in the backfield, we’ve got to make and finish the plays.”

Haddix’s Redhounds fell behind as many as 28 points, but never gave up and continued to battle throughout the contest.

Corbin cut its deficit to 49-43 with 7:27 left in the game, but the Cardinals took advantage of a turnover and Sloan did the rest by adding two more touchdowns to secure the 14-point win.

“When you turn the football over in this type of game, it’s hard to overcome,” Haddix said. “We had, I believe, three or four (turnovers) in the first half, and then we pick the ball off in the second half and then we fumble it back and turn it over again. We had five turnovers in the game and to give them that many possessions over you, it’s hard for you to come back and win. They’ve got a great player and a great football team.

“Our kids competed,” he added. “I know they’re going to give it their all every time they step on the field and they did that again tonight. They continued to fight tonight. That shows you a lot about our kids.”

Things looked good early on for Corbin as Combs marched the Redhounds downfield, but a fumble inside the Wayne County 15-yard line ended the drive.

It only took the Cardinals one play to take advantage of the Redhounds’ miscue as Sloan broke through the line and raced 86 yards to give his team a 7-0 lead at the 9:24 mark of the opening quarter.

The quick strike didn’t seem to affect Corbin as the Redhounds scored a minute later with Combs hitting Wine in stride with a 58-yard touchdown pass to tie the game at seven apiece.

It didn’t take Wayne County long to regain its lead as Brody Weaver and Tito Ruiz hooked up for a 46-yard touchdown connection at the 4:44 mark to give the Cardinals a 14-7 edge.

A Corbin turnover on its ensuing drive led to Sloan’s 24-yard touchdown run that increased his team’s advantage to 21-7 with 1:55 left in the first quarter.

Sloan took matters into his own hands once again to open the second quarter.

His 51-yard run on first down was followed by a three-yard touchdown carry on the ensuing play that gave Wayne County a comfortable 28-7 advantage with 9:39 left in the first half.

Corbin didn’t show any signs of quitting, though.

Haddix’s squad answered again on its ensuing drive as Nick Yeager’s 14-yard touchdown run at the end of the first half cut the Redhounds’ deficit to 42-22.

Corbin didn’t have an answer for Sloan in the first half, watching the Cardinal tailback run for 220 yards and four touchdowns, and he continued to find holes in the Redhound defense in the third quarter.

Corbin’s third turnover of the game led to Sloan’s fifth rushing touchdown. He avoided a couple of Redhound tacklers and ran 22 yards to paydirt, increasing Wayne County’s advantage to 49-22 with 6:33 left in the third quarter.

But just when it looked as if the Redhounds were out of the game, Corbin answered with a three-yard touchdown run by Yeager and a 53-yard touchdown pass from Combs to Dylan Massengill to cut its deficit to 49-36 heading into the fourth quarter.

Momentum continued to swing in the Redhounds’ favor going into the final quarter of play.

After seeing Corbin’s defense force Wayne County to punt, the Redhounds were able to score on its first possession of the fourth quarter.

Haddix’s squad faced a fourth and seven situation and managed to convert as Combs hit Patterson for a 35-yard touchdown pass to make the score 49-43 with 7:27 remaining in regulation.

But once again, Wayne County’s Sloan had an answer.

Wayne County forced another turnover on Corbin’s next offensive series which led to Sloan’s seventh touchdown run, a 43-yarder, allowing the the Cardinals to put the game away with a 63-43 lead at the 1:48 mark.

The Redhounds added another score with 22 seconds left in the game as Combs found Patterson open for an 18-yard touchdown to make the final outcome, 63-49.