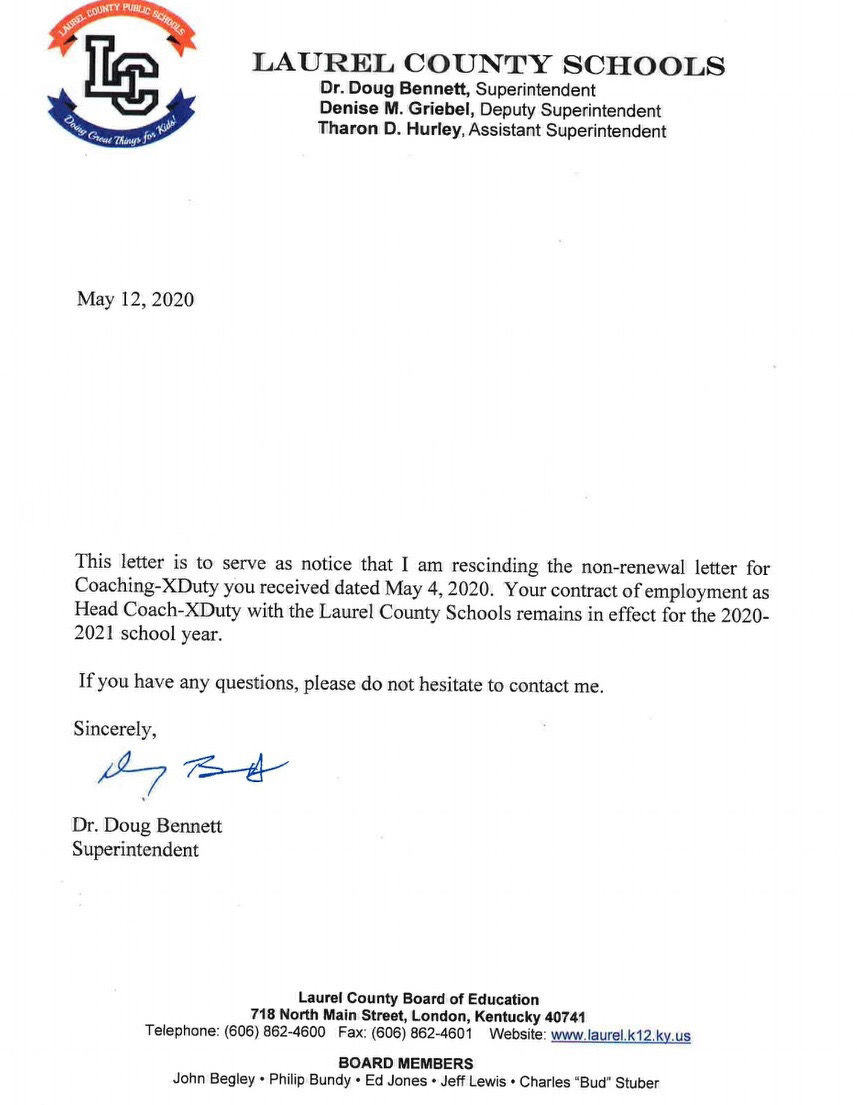 They letter received Wednesday with names and duties removed to protect identities. 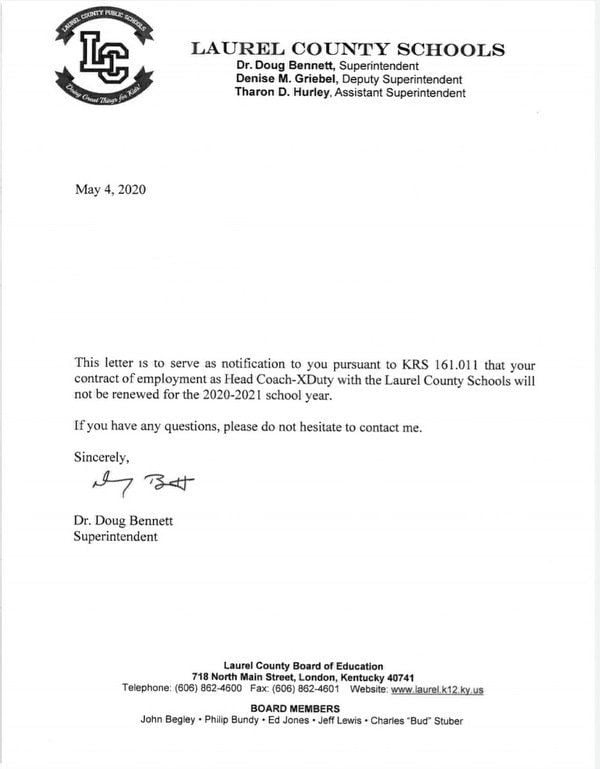 This is the email head coaches, assistant coaches and band directors received last week notifying them that their employment contracts would not be renewed for the 2020-21 school year. Any identifying information has been removed from the email to give coaches anonymity.

They letter received Wednesday with names and duties removed to protect identities.

This is the email head coaches, assistant coaches and band directors received last week notifying them that their employment contracts would not be renewed for the 2020-21 school year. Any identifying information has been removed from the email to give coaches anonymity.

UPDATE: After receiving pink slips last week stating that their contracts would not be renewed for the 2020-21 school year, Laurel County Superintendent Dr. Doug Bennett has confirmed that the non-renewal letters of all head high school coaches has been rescinded.

“Per recommendations and guidance regarding next year’s athletic programs from KDE and KHSAA, we sent all of our sports non-renewal of extra-pay letters. The letters received by coaches were regarding extra-pay for coaching duties. The basis for this decision is that we have not received verification that fall/spring sports will be permitted next school year. We greatly value our wonderful coaches and athletic programs and hold them in the highest regard. We are proud of the rich history and success of our athletic programs. We recognize the tremendous benefits of school-related athletic programs to build responsibility, character, perseverance, and teamwork. We want to be sure that we are acting as good stewards and allocating resources in the most responsible manner. If fall and spring sports are not permitted in Kentucky schools, it would not be the best use of resources to hire coaches with no athletes to coach.

Consequently, we notified staff of non-renewals of extra-pay within statutory guidelines. Athletic Directors were to notify each coach prior to receipt of his/her letter. We are hopeful as we continue through the state’s reopening phases, there will be early indications that sports seasons will be permitted to resume in Kentucky in the fall. Currently, there is no statement from a state regulatory agency regarding when athletic participation in Kentucky schools may resume. Yesterday morning, we rescinded the non-renewal letters of the head high school coaches. We rescinded the head high school coach letters so they may continue working in an administrative capacity to respond quickly if Kentucky schools are permitted to resume athletic programs. We are hopeful that we can resume our tremendous athletic programs as soon as possible. We can rescind the non-renewal of extra-pay when we have more information regarding the possibility of Kentucky schools resuming all or certain athletic programs.”

Several head coaches have confirmed to the Times-Tribune and the Sentinel-Echo that they received a second email stating that their contract of employment remains in effect for the following school year.

It has not been confirmed if assistant coaches or band directors have received the same email.

The Times-Tribune and Sentinel-Echo have reached out to Laurel County Superintendent Doug Bennett but has not yet received a response.

LONDON — Head coaches, assistant coaches and band directors throughout Laurel County received pink slips last week stating that their contract would not be renewed for the 2020-21 school year.

Each head coach, assistant coach and band director in the Laurel County Public Schools system was notified of the decision through an email that stated that their current contract of employment would not be renewed for the following school year.

“The Kentucky Department of Education recommended that all athletic coaches receive non-renewal letters for the upcoming athletic season due to the uncertainty of when school athletics will resume. Per the order by Governor Beshear, all athletic and extra-curricular activities are canceled through at least May 31. Additionally, per recommendation by Governor Beshear all school-owned athletic facilities and properties are to remain closed through June 30, 2020. Laurel County Schools have a rich history of athletic success. We are home to numerous district, region, and state championships! We look forward to seeing our athletes and band students back in action and showcasing their talents. We are hopeful this will be able to occur this fall, but at this time there is no definitive timeline. We will continue to wait for further guidance from the KHSAA, KDE, and Governor Beshear.”

There was also some discussion about the decision during Monday night's Laurel County Board of Education meeting.

Several coaches reached out to the sports departments of The Times-Tribune and The Sentinel-Echo expressing their disappointment in the decision to not renew the contracts of head coaches, assistant coaches and band directors for the upcoming school year. These coaches asked for anonymity as some hope to return to their jobs.

“A high school coach doesn't do it for money but for the love of the sport,” one coach said. “The countless and unknown hours spent in the off-season, summer and after school will never be known and would make someone wonder why we do this for what pay we get. The things we do to help kids get recruited, keep up with their grades, be a parent to many of them, help them get jobs, and hopefully help turn them into contributing members of society that will help lead us into the future — a coach is more than just showing up for a game or practice. It goes far beyond that and there is no amount of money that can be paid for that.”

“Coaches spend countless hours outside of practice and games preparation and in the off-season,” another coach stated. “No high school coach gets into it to make money. Truth be known, most people would think we were crazy if they knew what it breaks down to as an hourly rate. We show up as professionals, care about the kids we work with, bare the brunt of criticism, take responsibility for how our players perform and never cry about how much we make. Getting an email telling me I would not be hired back was just another way of telling us what we do does not matter. I believe the administration believes if there is no season, then coaches should not get paid. Bottom line, we will get hired back when seasons start but they don't have to by law, to me this shows no support for the work we do. Secondly, it has never been about money to me but it does show some type of commitment to me as a person, just like a commitment I made to in the Laurel County School District.”

Coaches also voiced concerns as they had had not been given any prior notification or an opportunity to discuss the decision with the administration beforehand.

“We are facing a new and challenging landscape with this pandemic, it is nice to see who has been supporting us and who does not,” said a third coach. “Receiving pink slips in an email and not discussing it prior to the entire athletic staff or extracurricular activity leaders clearly shows either the administration's lack of communication and professionalism or lack of support, maybe both.”

Billie Ruth Eisenbarth, age 88, of Corbin, passed away on Wednesday August 5, 2020 at Baptist Health in Corbin. She was born in Faber, KY to the late Andrew J. Rowland and Nannie Bennett Rowland. Billie was a graduate of Corbin High School and worked in the former Newberry's Department Store…

Mack Jones, 90, passed away July 31, 2020 at Baptist Health Hospital, Corbin, Kentucky. He was born March 11, 1930, the son of the late Axie and Mack Jones of Corbin. In addition to his parents, Mack was preceded in death by all nine brothers and sisters. He is survived by his wife of 68 yea…