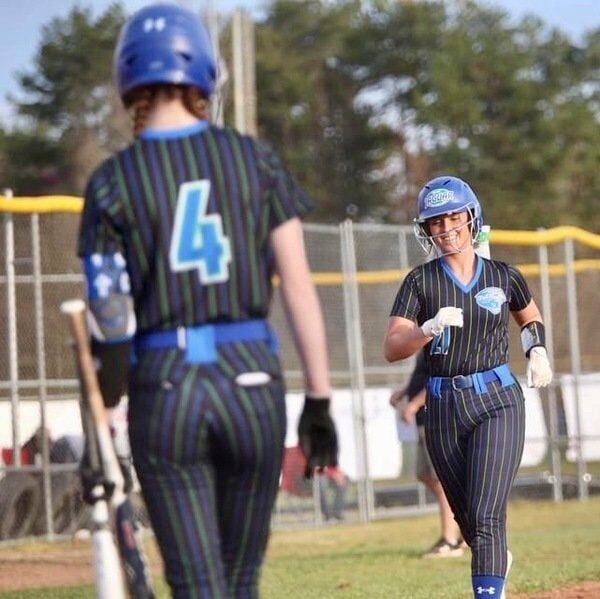 North Laurel's Emily Sizemore was all smiles after connecting with a home run during Tuesday's game against Corbin. The Lady Jaguars won, 5-2. | Photo by John Crisologo

North Laurel's Emily Sizemore was all smiles after connecting with a home run during Tuesday's game against Corbin. The Lady Jaguars won, 5-2. | Photo by John Crisologo

LONDON — The North Laurel Lady Jaguars put together a complete team effort on Tuesday night to take a 5-2 win over the Corbin Lady Redhounds in the 13th Region showdown.

Maddie Dagley turned in an impressive performance on the mound to lead the Lady Jaguars to the win. Dagley pitched a complete game for North Laurel, allowing six hits, two runs, and striking out eight batters.

The two teams went scoreless through the first two innings before North Laurel added two runs in each of the third and fourth innings.

Dagley doubled to bring home Braylee Fawbush to score the game’s first run of the night, followed by a run by Makayla Mastin to give the Lady Jaguars the early 2-0 lead. Emily Sizemore opened the second inning with a solo home run to put North Laurel up 3-0. Hallie Proffitt scored the Lady Jaguar’s fourth run of the night.

Corbin cut the lead to 4-2 in the top of the sixth inning. Alayna Reynolds and Kalia Stidham each scored on a single by Kaylee Morales to give the Lady Redhounds their only two runs of the night.

North Laurel added their fifth run in the top of the sixth when Hallie Norvell scored on a fielder’s choice hit by Dagley.

Corbin Coach Crystal Stidham said she was proud of the way her team continued to fight throughout the game, despite the loss.

“Tonight maybe a loss in the books for my team, but it is a huge win for my team. You have to face the best teams to be the best-come district time,” said Stidham. “My girls went seven with a great North team and a couple missed calls and plays and it’s a different outcome. Our girls are showing great determination and fight at the plate with every at-bat and we came away tonight with some huge hits, big plays, and confidence that my team needed and proved we are contenders.”

North Laurel was led at the plate by Sizemore with a home run. Dagley, Fawbush, and Proffitt each doubled once. Dagley had two runs batted in on the night, and Bailee Root and Sizemore brought in one run each.

Morales and Shelby Stewart each had two hits for Corbin. Reynolds had a double on the night, and Morales had two runs batted in.

Stewart and Kallie Housley combined to pitch the entire game. Housley pitched the first three innings and took the loss.