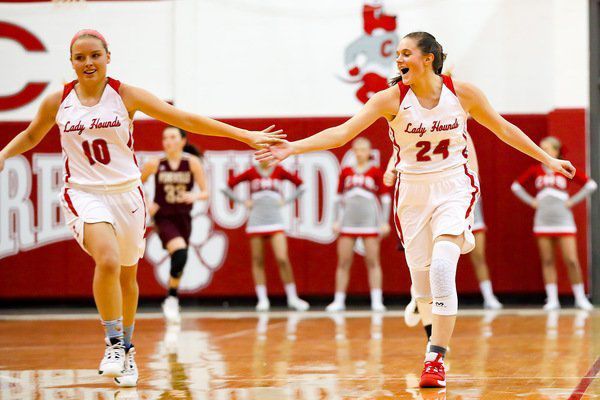 Kami Garland, Shelby Stewart and the rest of the Lady Redhounds opened the season with a 58-44 win over Pineville. | Photo by Les Nicholson 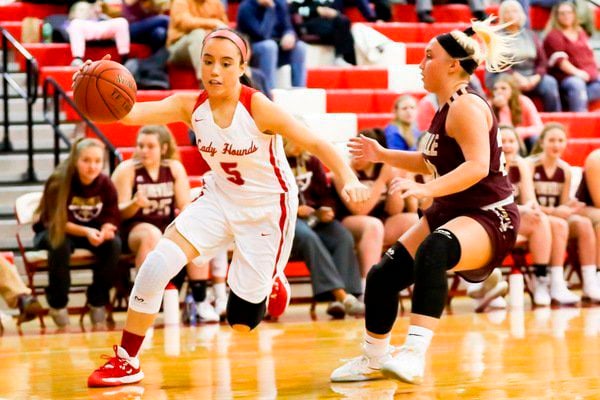 The Stewarts and Kaila Stidham (pictured) took over in the third quarter to help lift Corbin past Pineville Monday night. | Photo by Les Nicholson 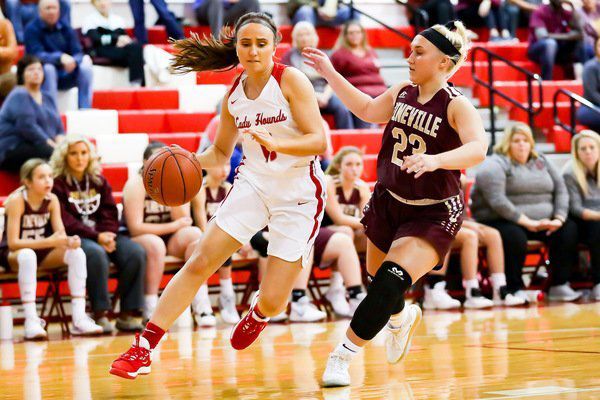 Corbin had a balanced offensive attack on Monday, with three players in double figures. Senior Marissa Scott led the way with 26 points. | Photo by Les Nicholson

Kami Garland, Shelby Stewart and the rest of the Lady Redhounds opened the season with a 58-44 win over Pineville. | Photo by Les Nicholson

The Stewarts and Kaila Stidham (pictured) took over in the third quarter to help lift Corbin past Pineville Monday night. | Photo by Les Nicholson

Corbin had a balanced offensive attack on Monday, with three players in double figures. Senior Marissa Scott led the way with 26 points. | Photo by Les Nicholson

The Corbin Lady Redhounds got the season started off on the right foot on Monday night when they hosted the Pineville Lady Mountain Lions and came away with a 58-44 win in the 13th Region showdown.

It is the third season under head coach Isaac Wilson, and the first time that his squad has opened the season with a win. Wilson said that his biggest takeaway from the win was the fact that every player that entered the game found a way to contribute, even in ways that may not show up on the stat sheet.

"Everyone that got into the game tonight was able to contribute for us in some way. A lot of girls didn't make their way in the scorebook, but they contributed in so many other ways," said Wilson. "These girls have great attitudes and they come every day ready to work and that showed tonight."

After the two teams played to an even score of 9-9 after the first quarter, Scott began to take over the game on the offensive end. The senior scored 12 of her team's 15 points in the second quarter, helping the Lady Redhounds to a 24-18 edge at the half. Wilson said he was happy to see Scott breakout in the first game of her senior season, and that the team needs more games like that from her this year.

"Marissa was a force on offense. We hit a lull there early on and she was the source of the offense and kept us afloat," said Wilson. "We always knew she was capable of doing that. We want her to continue doing that for us as the season moves along. I was happy to see her start her senior year that way."

The third quarter was the turning point in the game for Corbin. Just when Pineville was able to slow Scott's scoring, the Stewarts and Kaila Stidham took over in the third. Bailey Stewart scored six points and Shelby Stewart and Stidham each scored five, as the Lady Redhounds were able to pull away and extend their lead to 42-29 entering the game's final period.

Corbin was once again too much for the Lady Mountain Lions in the fourth quarter as Scott scored seven points and Shelby Stewart added six to help put the final nails in the coffin, as the Lady Redhounds rolled to the 58-44 win.

Wilson said while it is always great to start the season off with a win, what he likes the most is the potential he sees from his team. Even in the win, Wilson said that his team has plenty of room to grow and they will continue to get better throughout the year.

"This is year three and we knew it was going to be a building stage from day one. The girls have come such a long way, but we still have plenty of ways to grow. They are working and willing to be coached and they're getting better every day," said Wilson. "I think we executed enough plays to win tonight, but I think we can execute at a much higher rate, which is a good thing. When you have a lot of room to improve, but still come away with a win, that is a good thing."

Corbin has little to no time to celebrate their win versus Pineville, as they will now set their sights on an away game versus Harlan Independent on Thursday. It will be Harlan's first game of the season.