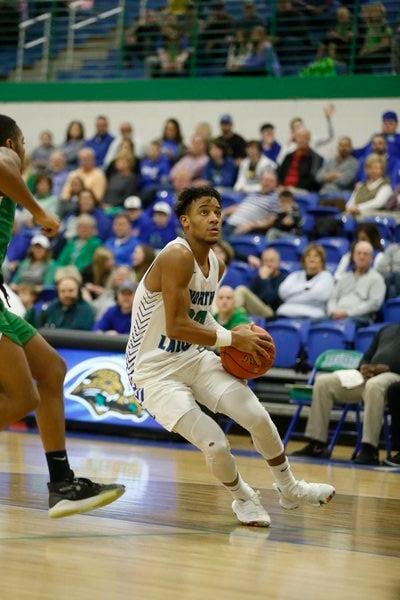 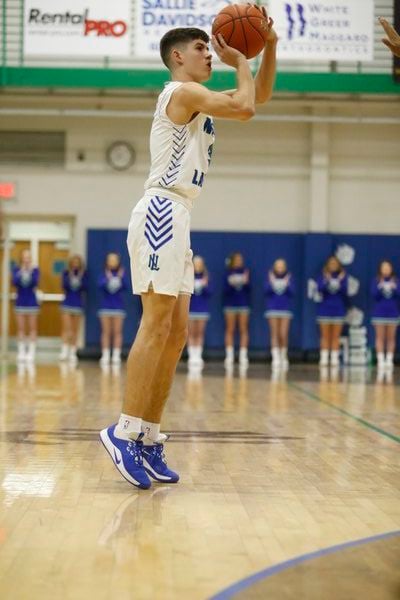 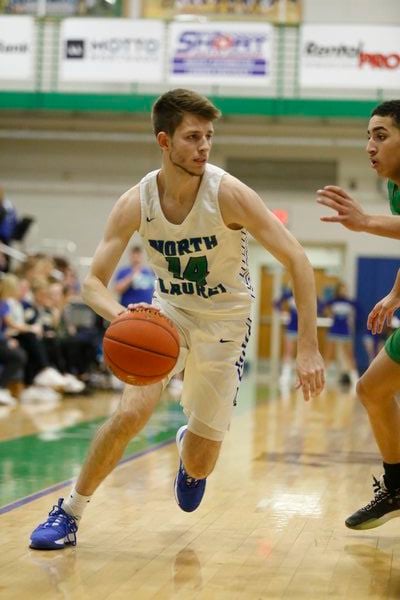 North Laurel's Cole Kelley drives the ball down the court during the Jaguars matchup with Harlan on Monday night. | Photo by Emily Adams-Bentley

North Laurel's Cole Kelley drives the ball down the court during the Jaguars matchup with Harlan on Monday night. | Photo by Emily Adams-Bentley

LONDON -- The North Laurel Jaguars cruised to their fourth straight win on Monday night after defeating the Harlan Green Dragons, 83-67.

"We said our last three (games) before coming into this one were the most important games for us when we had a Tuesday, Friday, Saturday stretch there, and said those would be important wins for us just to prove to us that we can actually play," said North Laurel Coach Nate Valentine. "We were tired, we've had three games in four days but to come out here with a win and get number four in a row as we head into the tournament, I think things are heading in the right direction."

The Jaguars quickly jumped to a double digit lead after holding the Green Dragons to only nine points in the first quarter while adding 20 points to the scoreboard.

Both teams added 18 points in the second quarter to help the Jaguars keep the 11-point lead at halftime.

North Laurel outscored Harlan 45-40 in the second half to hang on to the lead and find the win.

Four Jaguars were in double digit points in Monday night's win with Isaiah Alexander leading the team with 23 points.

The Jaguars knocked down 13 three-pointers in the win with Alexander leading with five three-pointers. North Laurel also had 31 rebounds and 24 assists in Monday night's win with Reed Sheppard leading the team with 15 assists.

North Laurel will be back in action on Friday in their final regular season game as the Jaguars host Knox Central at 7:30 p.m.

"We're going to get a rest, which is the biggest thing right now," said Valentine. "Our focus now goes to the district tournament."

The North Laurel Jaguars picked up a big win over 14th Region powerhouse the Hazard Bulldogs on Saturday in the Jaguars' second overtime game of the season, 63-60.

With the win, the Jaguars are now sitting at a three-game winning streak as they head into the final week of regular season action.

"Really proud of our effort tonight (Saturday)," said Valentine. "We have put together three solid games. We are getting contributions from different guys every night. Hazard is a really good basketball team with a hall of fame coach."

After a close first quarter, the Jaguars were able to pull away in the second quarter after outscoring Hazard, 18-13. North Laurel went into halftime with a six-point lead over the Bulldogs, 31-25.

The Bulldogs came back into the second half ready to fight with a big 21-point quarter.

The Bulldogs took the lead after Jacob Johnson knocked down two free throws but the Jaguars quickly answered with a shot by Sheppard to tie the game back up at 34 apiece. Less than 30 seconds later, Hazard's Jarrett Napier knocked down a shot that put the Bulldogs back ahead, 36-34, and Hazard held on to that lead for the remainder of the quarter, going into the fourth quarter with a 46-41 lead over North Laurel.

In the fourth quarter, North Laurel's defense tightened up, allowing the Bulldogs just seven points in the quarter as the Jaguars clawed their way back into the game. A three-point play by Sheppard tied the game up at 51 apiece with 3:25 left in the quarter but Hazard soon answered with a shot by Noah Neace to give the Bulldogs the lead, 53-51.

The Jaguars weren't ready to give up yet, though, as Sheppard knocked down a shot with 1:30 left in regulation to tie the game back up once again at 53 apiece and neither team was able to knock down another shot to send the game into overtime.

After Cole Kelley knocked down a three-pointer to get scoring going in overtime with 2:40 left and take over the lead once again, the Jaguars were able to hang on to the lead to find the 63-60 win.

Sheppard led the team with 32 points in Saturday's win.