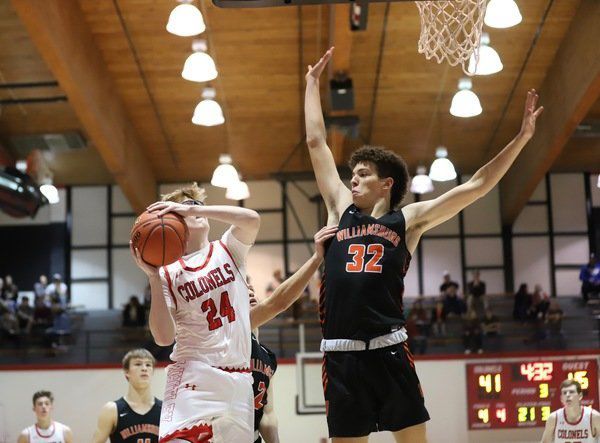 Whitley County's Ethan Keene goes up for a shot as Williamsburg's Evan Steely attempts to make a block during Tuesday night's matchup. | Photo by Darrin Spencer 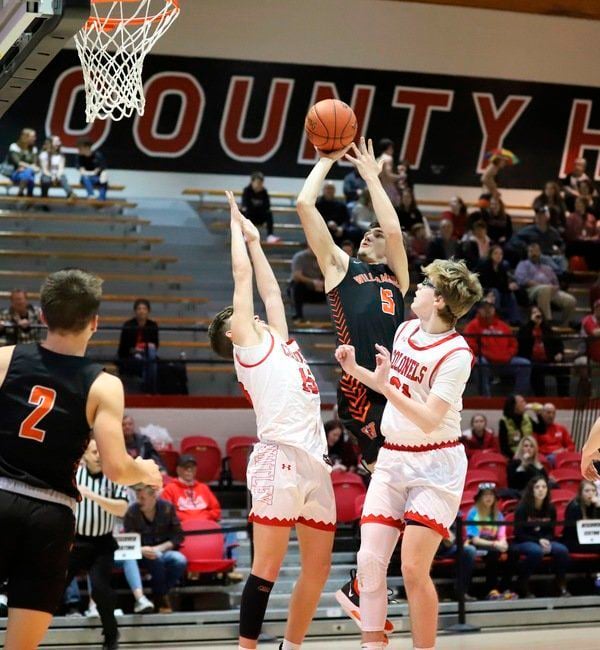 Williamsburg's Caleb Rose goes up for a layup during the Yellow Jackets win over Whitley County on Tuesday. | Photo by Darrin Spencer 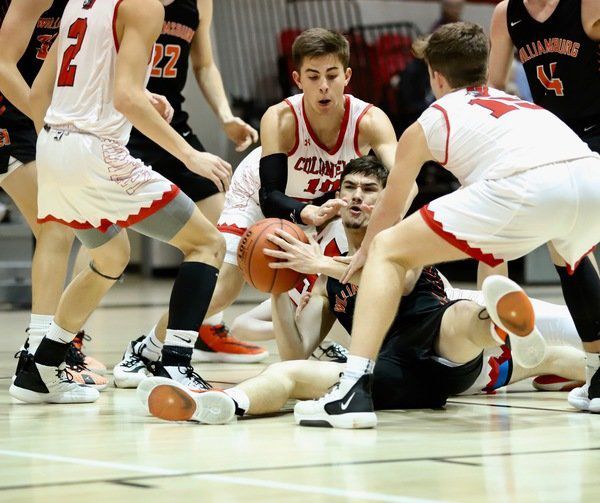 Whitley County's Ethan Keene goes up for a shot as Williamsburg's Evan Steely attempts to make a block during Tuesday night's matchup. | Photo by Darrin Spencer

Williamsburg's Caleb Rose goes up for a layup during the Yellow Jackets win over Whitley County on Tuesday. | Photo by Darrin Spencer

After being down late in the fourth quarter, the Williamsburg Yellow Jackets finished the game on a 12-4 run to put away the Whitley County Colonels in a 71-67 thriller on Tuesday.

It was the second time in their past four games that Williamsburg has defeated the Colonels. The Yellow Jackets came away with an 81-65 win on January 28, with Tuesday night completing the two-game sweep of their crosstown rival.

The trio of Slaht Hunter, Caleb Rose and Micah Steely powered Williamsburg, with all three players scoring in double figures and combining for 60 of the Yellow Jackets' 71 points. Hunter led the way with a game-high 24 points, followed by 22 from Rose. Steely finished with 16 points.

Williamsburg looked like they were going to run away with the game when they raced out to a 19-7 lead after the first quarter. The Colonels countered in the second, outscoring the Yellow Jackets 28-17 and cutting the lead to 36-35 heading into the half. Whitley County's Brayden Mahan scored 12 points in the period, and Ethan Keene added 11, helping their team get back into the game.

Coach Nick Napier said his team came out and executed their game plan perfectly to open the game, but got away from what they were doing in the second quarter, resulting in Whitley County's rally.

"We did what we felt like we should have done early in the game. We got some fast breaks and had a good first quarter," said Napier. "In the second quarter, we went away from what got us that early lead. Whitley County hit some big shots and didn't lay down. They played extremely hard and were able to make it a game."

The momentum and hot shooting from the Colonels cooled off in the third quarter, as Williamsburg's defense tightened up. Rose scored 10 points for Williamsburg and they connected on seven-of-nine free throws as a team to maintain control of the game. The Yellow Jackets outscored Whitley County, 20-16, in the period, extending their lead to 56-51 heading into the fourth.

"At halftime we talked to the guys about rotating on defense and getting stops. We had to play better defense in the second half. We changed defenses a time or two, but we simply didn't execute the game plan in that second quarter," said Napier. "I thought we played much better in the second half. We executed better. We played harder."

The game was back and forth in the fourth quarter, with Williamsburg maintaining the lead until the Colonels took control with around three minutes left in the game. Whitley County's biggest lead came at 2:26 with a 65-61 lead.

"The one thing I felt good about was the way we finished the game. We lost games like this early in the year, but tonight we were able to pull out the win. We got down late, but we executed down the stretch to win," said Napier. "The game came down to getting stops and rebounding and we were able to do that. We got the ball to the rim and scored. We had strong drives. But, stops and rebounding won the game."