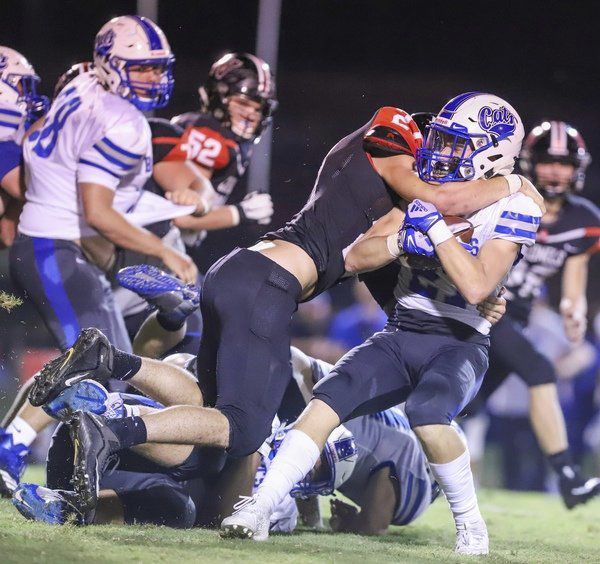 the second quarter of the Colonels' game against the Bobcats. | Photo by Dylan Wilson 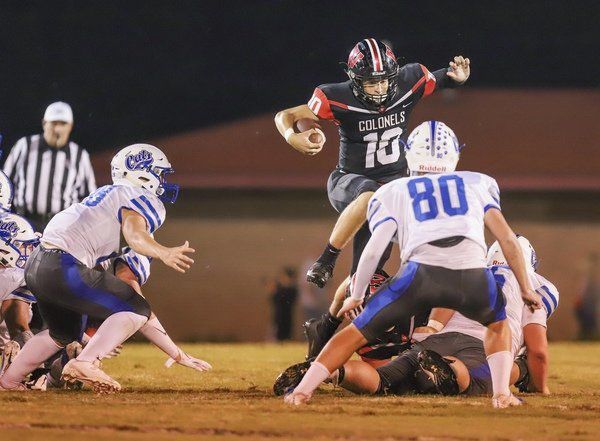 the second quarter of the Colonels' game against the Bobcats. | Photo by Dylan Wilson

WILLIAMSBURG -- Bell County's London Stephney showed why he is considered as one of the top quarterbacks in the state during the Bobcats' 42-21 win over Whitley County on Friday.

Stephney hurt the Colonels through the air and on the ground as he managed to throw for a touchdown while rushing for more than 100 yards and finding the end zone twice carrying the ball.

Whitley County falls to 2-2 with the loss and will now begin district play beginning Friday with a home date against Pulaski County.

"Bell County is an excellent team," Whitley County Coach Jep Irwin said. "They're experienced and probably more talented than us right now at every position. That's not our kids' fault. We made some mistakes in the first half, and just dug too big of a hole.

"We challenged the kids at halftime to win the second half," he added. "I was proud of how the defense fought and we moved the ball better on offense and was able to score. We were just too far behind and we ran out of time."

It looked as if Bell County was going to put the game out of reach early after jumping out to a quick 14-0 lead.

Bobcat quarterback London Stephney was a one-man wrecking crew early in the game.

Whitley County's offense got on track late in the first quarter as Seth Mills' 16-yard touchdown pass to Tanner Gilbert cut the Colonels' deficit to 14-7 with four minutes remaining in the opening period.

Stephney added his third rushing touchdown of the game, a one-yarder, that increased Belo County's advantage to 20-7 four seconds into the second quarter.

Whitley County struck again at the 8:34 mark as Caleb Irwin took a screen pass from Mills and raced 85 yards to make the score, 20-14.

The Bobcats finished the remainder of the first half strong by adding to more touchdowns to take a 34-14 lead at halftime.

Stephney threw a 34-yard touchdown pass to Cameron Burnett making the score 26-14 while Trevor Kidd added a four-yard rushing touchdown to give the Bobcats a 20-point lead.

Woody Lawson was able to get the Colonels back into the end zone with a seven-yard touchdown run with 11:35 remaining in the fourth quarter to make the score 34-21, but Bell County's Hayden Callebs' six-yard touchdown run wrapped up the Bobcats' 21-point win.