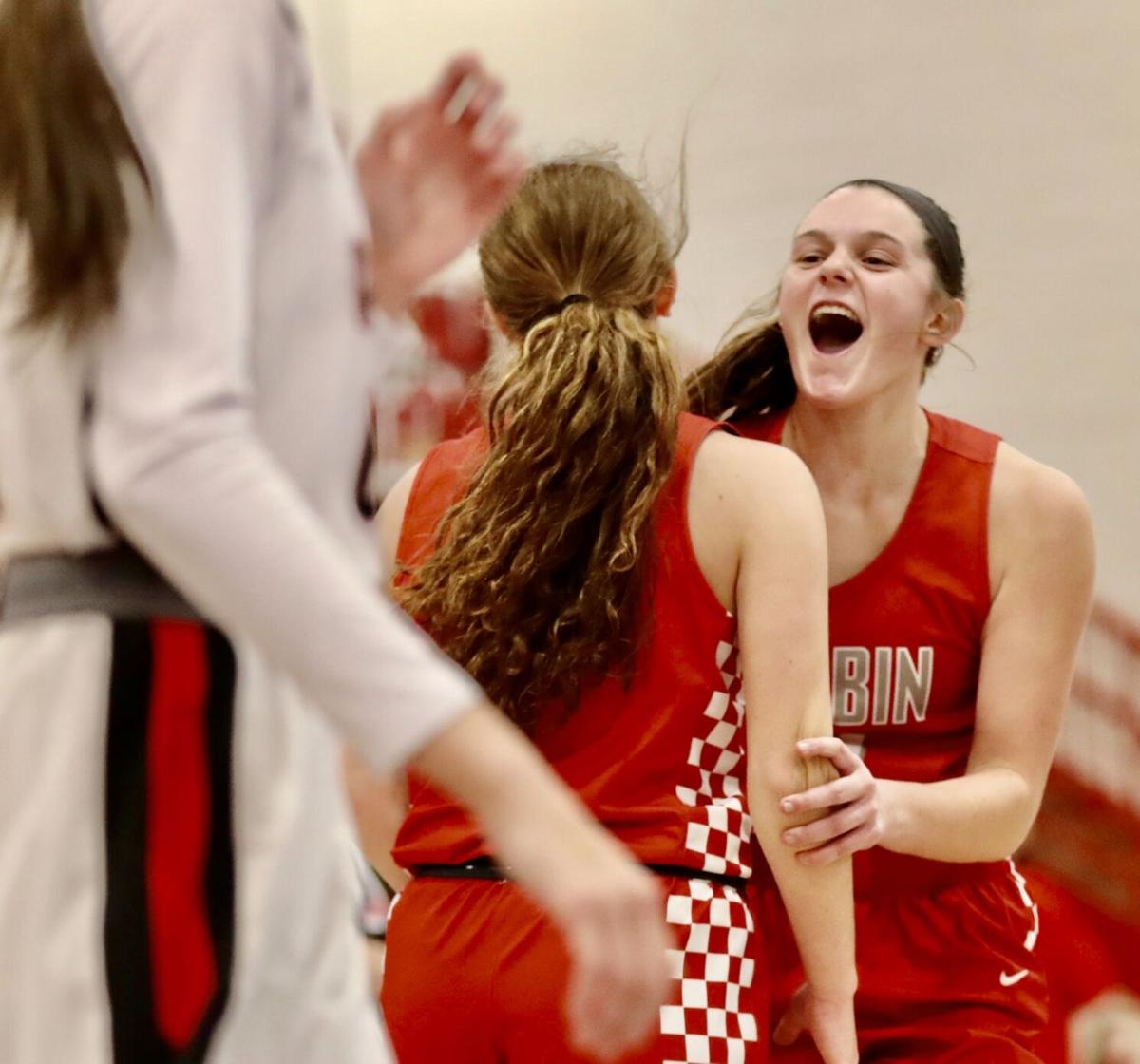 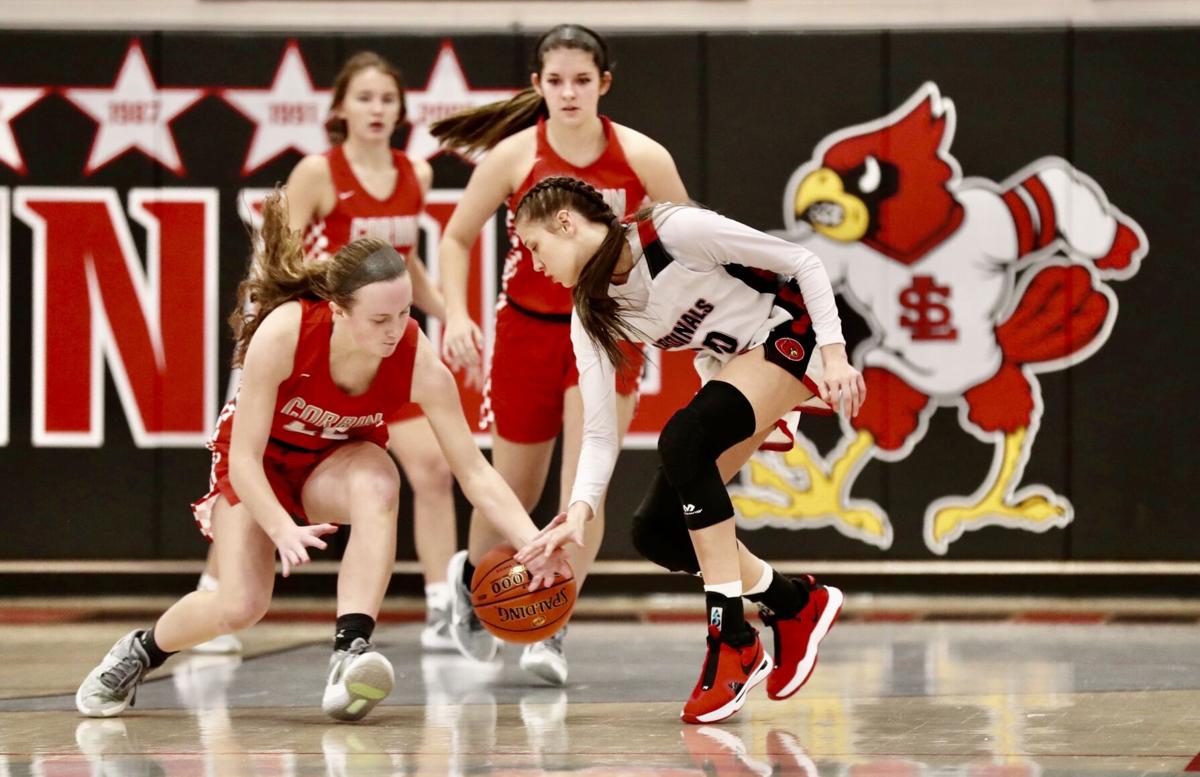 Corbin’s Bailey Stewart and South Laurel’s Raegan Jones battled for possession of a loose ball during Thursday’s matchup between the two teams. | Photo by Les Nicholson

Corbin’s Bailey Stewart and South Laurel’s Raegan Jones battled for possession of a loose ball during Thursday’s matchup between the two teams. | Photo by Les Nicholson

LONDON — On January 20, 2017, the South Laurel Lady Cardinals lost to Whitley County 66-62 in overtime. For the next four years, the Lady Cardinals went on an incredible run in which they were undefeated against district opponents, won four-straight 50th District titles, one regional title, and were considered by many to be the eventual state champion last season, before COVID-19 ended the state tournament.

That run of unprecedented success took a blow on Thursday night, when the Corbin Lady Redhounds gave the Lady Cardinals their second loss in their past 32 district games by claiming a 65-54 win. Isaac Wilson’s squad had lost to South Laurel by an average of 38 points over their past five meetings, but they showed there is a new leader in the 50th District this season.

The Lady Redhounds were coming off of a disappointing loss to the Pineville Lady Mountain Lions on Monday night, and Wilson knew that his team would have to play one of their best games of the year if they were going to knock off the talented South Laurel team.

Wilson said after two days of good practice, he knew his girls were going to be ready.

“This was a good win for us. We’ve been in a slump and had a bad loss at Pineville this week. We knew we couldn’t come in here tonight and play like that. We had two good days of practice and we came to play tonight,” said Wilson. “We really needed this win. We needed to be able to step up and play like this in district play.”

It’s been a tough start to the season for the Lady Cardinals. After winning their season opener, Chris Souder’s team has now lost four in a row. Souder gave Corbin all the credit for the win on Thursday.

“First of all, hats off to Corbin. They were the better team tonight,” said Souder. “We are really struggling to find our way right now and our play is definition an indication of that. We just have to come to work every day and figure it out.”

While the Lady Redhounds picked up the double-digit win, the game was close for much of the four quarters. Corbin jumped out to a 14-12 lead behind five points from Shelby Stewart and Kallie Housley in the first quarter. Eighth-grader Reagan Walker knocked down a big three-point shot and a pair of free throws in the second to give the Lady Redhounds a 27-24 lead at the half.

The halftime lead was big for the Lady Redhounds, according to Wilson. Not only did Corbin have to play well to win on Thursday, but they had to overcome the mental hurdle of playing against a South Laurel program that had been dominant over the past few years.

“I had to deal with that as a player, my first two years of high school on the boys side, playing against very good South Laurel teams. Sometimes you see the name on the front of their jerseys and it is tough. They’ve given us some beating the past few years,” said Wilson. “I don’t think our girls did that at all tonight. I think they came out ready and focused. They did what they had to do to win the ball game.”

Corbin came out in the third quarter firing behind the offensive play of sophomore Bailey Stewart. Stewart connected on two three-pointers in the third and scored 13 of her team-high 19 points in the period. Junior Rachel Presley did her best to keep the Lady Cardinals in the game, scoring eight points in the third, but every time South Laurel cut into the Corbin lead, the Lady Redhounds would pull back ahead.

Souder said his team continued to fight and claw to get back into the game in the second half, but never quite got over the hump.

“It seemed like every time we would make a run, we would make a mistake, and they seemed to capitalize on all of them,” said Souder. “Give credit to them for taking advantage of opportunities. We also have to do a better job taking care of the basketball. We will get better.”

Both Bailey and Shelby Stewart, along with Houseley stepped up and knocked down free throws down the stretch to help Corbin maintain their lead in the final minutes of the game. South Laurel cut the score to 53-50 with just over two minutes left in the game, but the Lady Redhounds finished with a 12-4 run to seal the 65-54 win.

Wilson said he was proud of the way his squad was able to finish the game and make plays down the stretch.

“We have taken some shots this year and we’ve been able to find ways to win games. We took a shot by South late in the game, but we finished strong. You can’t make losing basketball plays in the fourth quarter and expect to win, and we didn’t do that tonight,” said Wilson. “I’m proud of these girls. They are finding ways to win. We’re going to enjoy this one and then we’re going to get back to work. We have to build on this win and keep getting better.”

Bailey Stewart led Corbin with 19 points on the night, followed by Shelby Stewart with 14 and Housley with 11. Presley led South Laurel with 21 points, while Brianna Howard added 14, and Corbin Miller finished with 10.