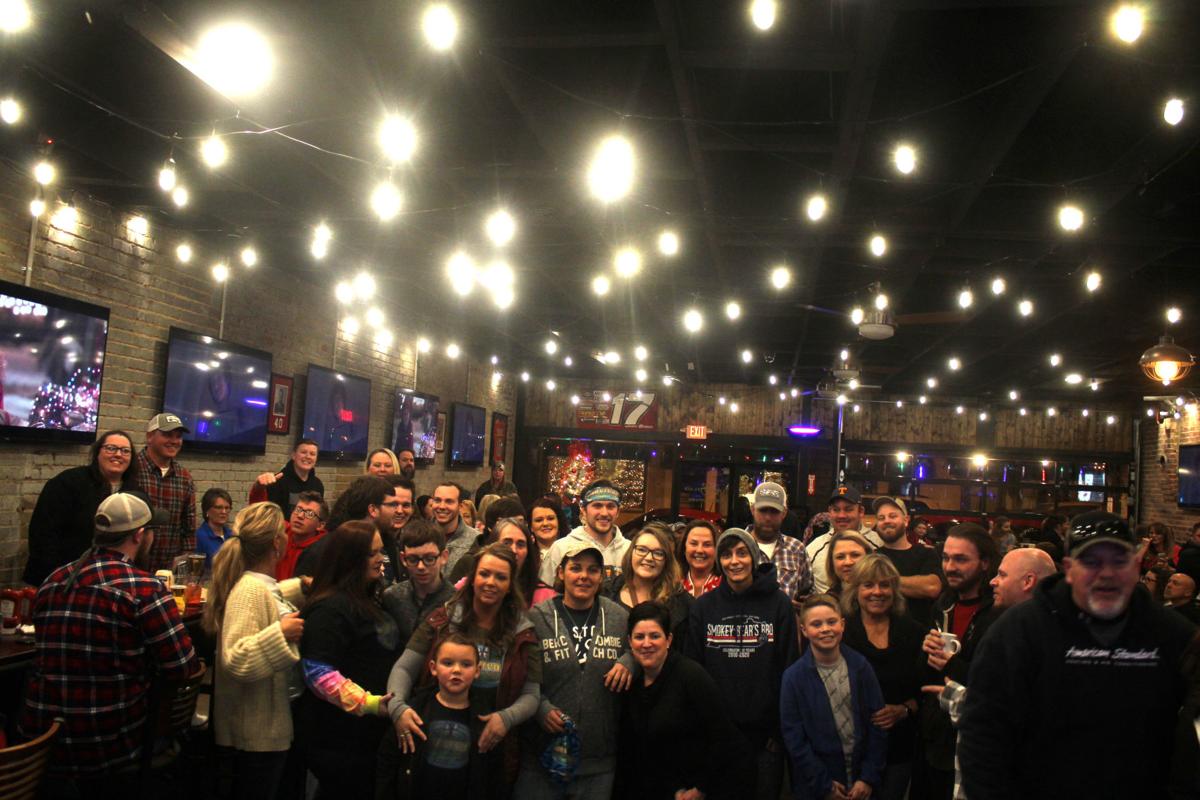 A group of about 75 gathered at Shep's Place to watch this week's episode of "Survivor". 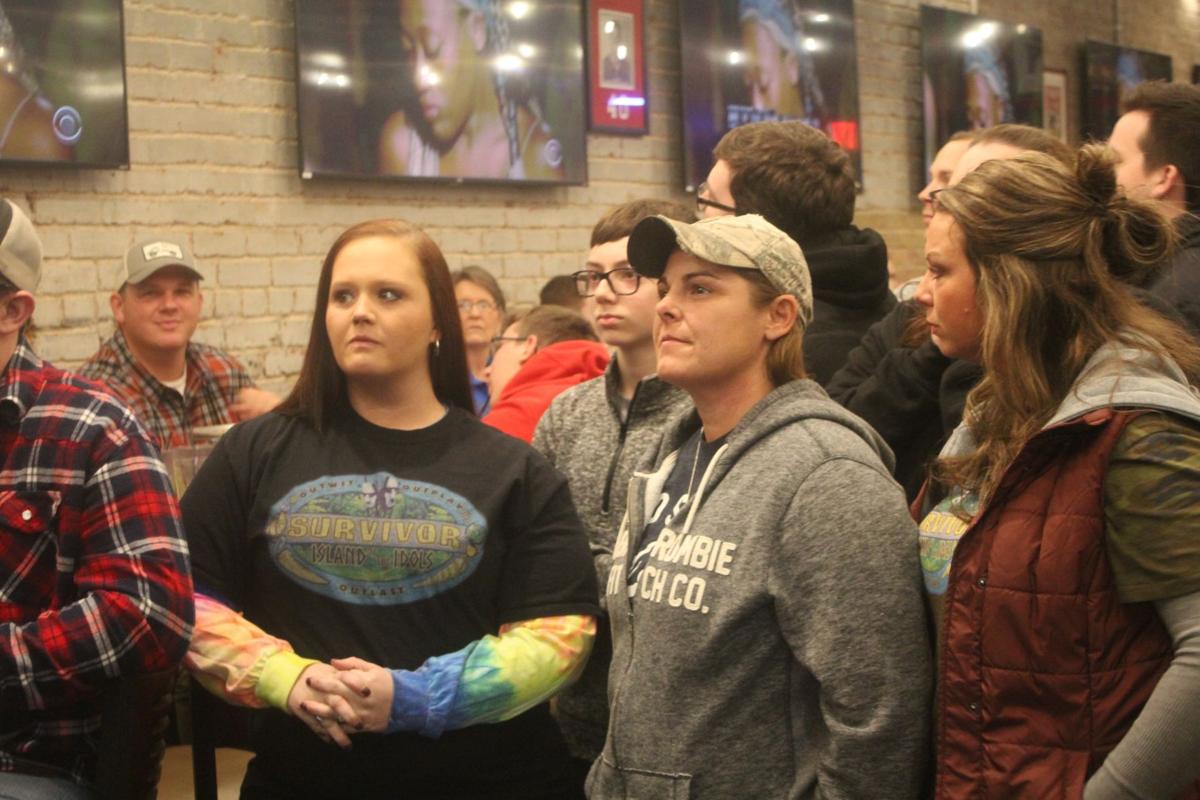 Elaine Stott (wearing hat) stands at Shep's Place Wednesday watching as she was voted off the island.

A group of about 75 gathered at Shep's Place to watch this week's episode of "Survivor".

Elaine Stott (wearing hat) stands at Shep's Place Wednesday watching as she was voted off the island.

It was an emotional night on "Survivor: Island of the Idols" as Rockholds' Elaine Stott was voted off the island.

As over 75 people gathered in Shep's Place in Corbin Wednesday night in support of Elaine, it was obvious in Corbin and it was obvious on screen that Elaine had won the hearts of everyone around her.

But because everyone on "Survivor" loved her, she was sent to the jury as the 14th person voted off this season during Wednesday's episode. She was a threat to her other tribe mates who wanted to win the million dollar prize and they knew a jury would vote for her to win.

If you haven't read any of my recaps before, I've been watching "Survivor" since season one so each week, since I watch it anyway, I have written a recap of the episode, mainly focused on Elaine. I may throw out my opinion here and there on it, but that's just because I love the show and am so excited and proud of Elaine.

Going into the episode, I thought Elaine would make it through to finale night, which is next week, and have a chance to make it into the final three.

As soon as the episode began, though, it was obvious that Elaine knew she was going home if she didn't get immunity. She said it several times at the beginning of the episode.

"I know I'm in trouble," she said during one of her confessionals.

In last week's episode, Elaine used a hidden immunity she found. The castaways knew that another hidden immunity would be replaced on the island so Elaine started looking for it as early as she could the night after tribal council.

Janet ended up finding the idol, though, and Elaine and Dean caught Janet showing Tommy the idol.

Again, Elaine knew she was in trouble.

"I'm public enemy number one," she said, noting that no one wanted to sit next to her at the end.

So Elaine strategized and used that to try to win over Lauren and get her to vote against Noura. Elaine talked with Lauren about how Tommy and Dan, who were in Lauren's alliance, would more likely take Noura than Lauren to the end with them because they knew they could win over Noura.

That prompted Lauren to begin asking more questions and truly wondering if Elaine was right. Our girl Elaine sure is a pretty strategic player — I hope all the other castaways realize that now while watching this season back, after the number of times they underestimated how strategic she actually was.

Dean ended up having his name drawn from a bag, making him the next castaway to visit the Island of the Idols. While there, Dean got a lesson in jury management from "Survivor" legends Boston Rob and Sandra.

They told Dean he needed to be able to tell a story that would make the jury feel like he played the best game, so he took a 50/50 chance on a coin flip and won an idol nullifer.

At the immunity challenge... it hurt for us Elaine fans. She had it. She knew it. We knew it.

The castaways had to go through a little obstacle course and at the end of the obstacle course was a puzzle where they had to put together a seven word phrase. Elaine, who has said numerous times that she is not good with words, looked to be the only person with any idea of what the puzzle spelled.

She knew what it was, "This game will mess with your mind," but Dean somehow managed to beat her in putting the puzzle together.

Elaine knew that was it. She knocked over her puzzle in defeat.

My recap of the speech will never do it justice, so please take a moment to watch it, you can do so for free on CBS.com.

Elaine pointed out that no one would take her to the end, so why not get rid of Noura who would be a likely favorite to take to the end because everyone thinks they will be able to beat her in the jury vote.

The tears — from those on "Survivor" at the tribal council, from those of us at Shep's Place watching it with Elaine on Wednesday and I'm sure the tears from the rest who supported the fan-favorite Elaine — however, were flowing as she talked about how the glass is always half empty for her. She said except for getting on "Survivor," she has always been unlucky.

With her mom passing away just a year ago, and at the time of the filming it had just been three months since her passing, Elaine said she needed "Survivor" for the time it gave her to find herself.

"Time is what I need," she said during the tribal council. "Time heals."

Elaine told Host Jeff Probst that from day one she had been a target and she had been fighting for 35 days, "I'm gonna fight until you snuff my torch."

Probst told her he didn't want to snuff anyone's torch and then in an unusual move, Probst let Elaine say his iconic words: "Time to vote."

The alliance stuck together, though, and voted Elaine out. There were more tears and hugs than any other tribal council this season as Elaine was truly loved by all.

After snuffing her torch, Probst gave Elaine a hug and her 35 day fight was officially finished.

Elaine will now be a member of the jury and will still be on next Wednesday's (Dec. 18) finale episode which will begin at 8 p.m. on CBS. She will help decide who will win this season, "Survivor: Island of the Idols."

While most episodes end with the snuffing of the torch, this episode had a brief scene where Probst came to camp to tell the remaining castaways that Dan (who was one of the six remaining players) had been removed from the show.

Dan had been accused of inappropriately touching a female contestant earlier in the season, as he had made her feel uncomfortable multiple times throughout the season.

The scene faded at the end of the episode Wednesday and the following words were shown: “Dan was removed from the game after a report of another incident, which happened off-camera and did not involve a player.”

CBS made the announcement that the finale episode which usually features a three-hour live finale and reunion show will instead be pre-taped earlier in the day in Los Angeles due to the sensitive nature of the material this season, according to Entertainment Weekly.

Elaine will get to be at the taping of the finale in Los Angeles on Wednesday. I would expect Elaine to win the Fan Favorite Award, so there is still reason to tune in on Wednesday.

I will have an interview with Elaine Stott in another article that will be featured in Friday's Times-Tribune.