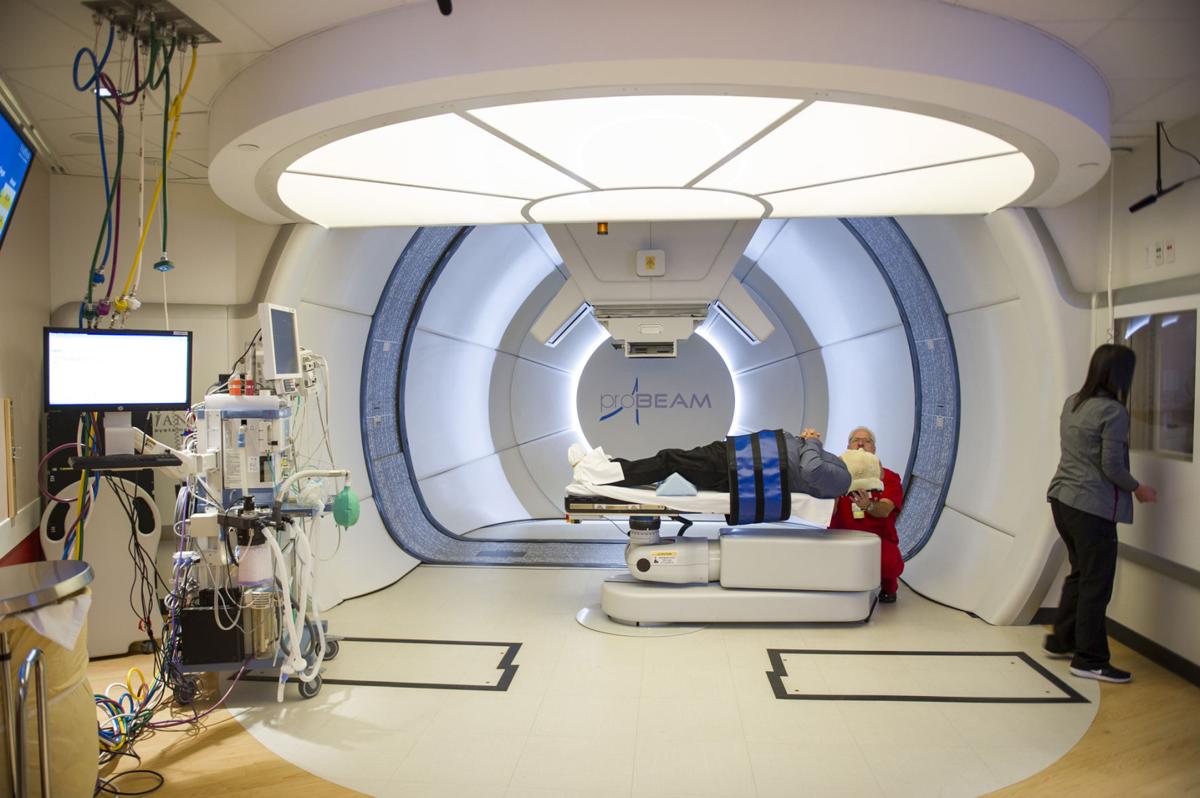 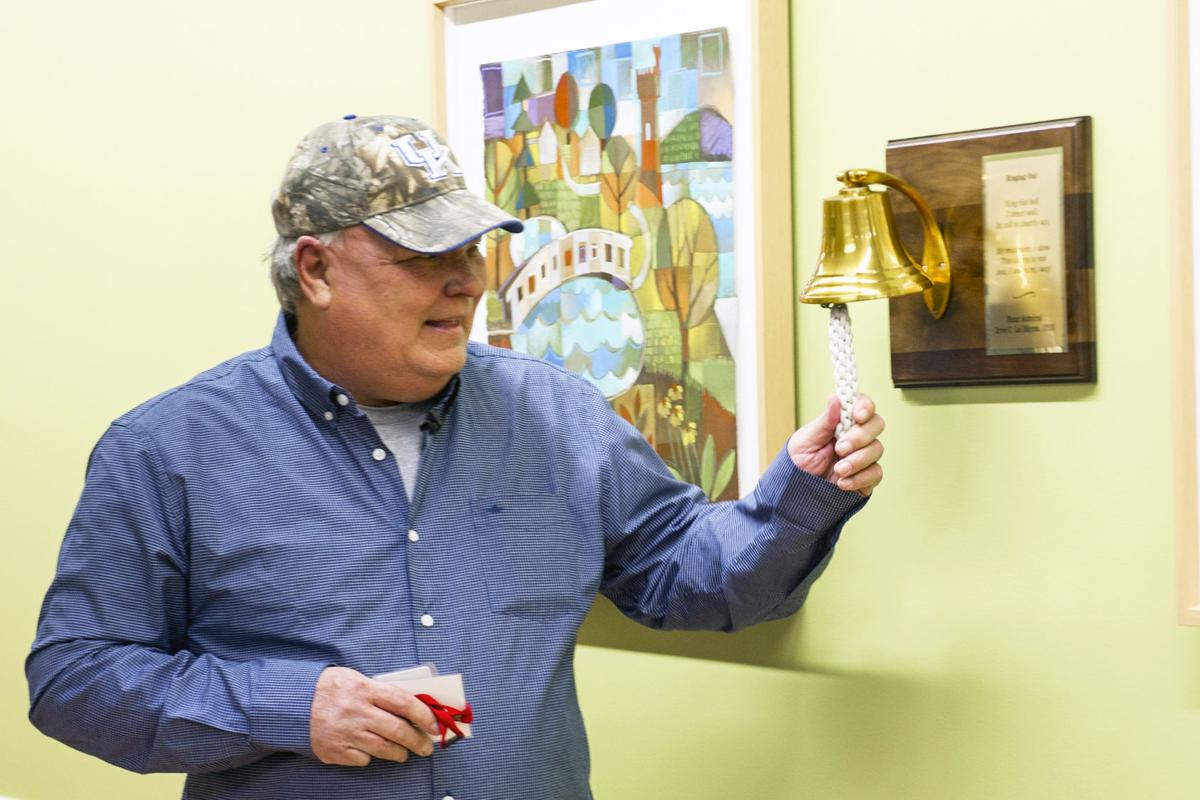 After completing daily treatments over a four-week period, Troy Witt rings the “Victory Bell” at the clinic.

After completing daily treatments over a four-week period, Troy Witt rings the “Victory Bell” at the clinic.

A word that far too many families in the area have heard and experienced.

But continued research and cutting-edge technology have continued to provide hope for those who hear that dreaded word in their diagnosis.

That research and technology was the beacon of hope for a London man - one of the first patients at the newly established proton therapy clinic in Cincinnati.

Troy Witt, 65, is the clinic’s local success story - a man who underwent proton treatment after being diagnosed with a brain tumor just 10 months ago.

Now Witt is enjoying a better quality of life than before his diagnosis - and with less health issues than cancer patients who underwent traditional radiation treatments.

It all began last spring when Witt noticed some things out of the ordinary.

“My eyes were watering a lot so I thought I’d go to the eye doctor and see if I needed glasses or if something was wrong,” Witt said.

That decision is one that probably saved his life.

When Dr. Mackey in Corbin tested Witt’s eyes, he noticed an abnormality and referred Witt to the Corbin hospital for more extensive tests. Those tests showed a mass behind Witt’s eyes.

Witt’s daughter works with a medical specialist in northern Kentucky and immediately made him an appointment at the Mayfield Clinic in Cincinnati. Within the next week he was undergoing an MRI, where a tumor nesting in his forehead was detected.

“They said the tumor was the size of an orange,” Witt said. “I came through that okay and came back home. But I couldn’t bend or lift anything over five pounds. They told me I could only sit or walk.”

But a simple cough and a sneeze caused setbacks to his recovery, which sent him back to specialists to repair the area.

Then came the discovery that a piece of the tumor and some cancerous areas  around it still remained.

Due to the positioning of the tumor, however, the radiation usually offered for cancer patients was precarious. It was then that Witt was referred to the University of Cincinnati Children’s Hospital where he learned about proton therapy - the newest cancer treatment available.

Proton therapy offers a more concentrated treatment with certain types of cancer by targeting a smaller area where the tumor is located, thus sparing exposure to other healthy tissues.

“The difference with proton therapy is we can keep the radiation away from other tissues,” he said. “It is an aggressive treatment of a tumor with more precision to target the affected area without damaging the surrounding areas.”

In a press release explaining the new procedure, Katie Pence, assistant public relations director for the University of Cincinnati Academic Health Center, explained that proton therapy works by “extracting positively charged protons from hydrogen gas and accelerating them through a cyclotron (a particle accelerator) up to nearly two-thirds of the speed of light. The protons are guided to the tumor by magnetic and electrical fields to reach a targeted point in the tumor and then stop before they can harm nearby, uninvolved tissue.”

There are currently only 22 proton therapy centers in the United States, with the closest clinics being in Cincinnati and Knoxville.

Breneman said areas where proton therapy is especially effective when areas of the heart, abdomen, and liver could sustain damage from regular radiation treatments.

“Proton therapy is a more concentrated treatment and has proven effective for many children,” he added. “It’s also effective with breast cancer.”

Breneman explained that radiation for breast cancer patients - especially those with cancer in the left breast - can cause problems with the heart because of its placement over the heart. The same holds true for women with cervical cancer, whose internal organs may be subject to damage from regular radiation treatments.”

Proton therapy is also being used for patients who have cancer in the head, throat and neck, Breneman added.

“I had daily treatments for seven weeks,” he said. “I stayed with my daughter in northern Kentucky. They said the side effects would be skin irritation and a 50 percent chance of losing my eyesight or memory. The only side effect I had was some sores in my nose.”

Witt said he has had no memory loss and was watched closely afterwards for seizures or strokes - none of which he has experienced.

What he has experienced is a loss of taste and smell but within 30 days after his treatments wrapped up in November, Witt was driving and enjoying his life as he had prior to the diagnosis. His eyes still water sometimes as they did before discovering he had a brain tumor, but not in the same manner as before.

Witt credits God for allowing him another chance at life and praises the doctors and nurses who attended to him during his treatment.

“You couldn’t beat the doctors and nurses,” he said. “It was almost like a family.”

Now back at home, Witt is looking forward to enjoying his “country boy” lifestyle - riding on his tractor, planting a garden this spring, playing with his dog and spending time with his wife of 50 years - Brenda.

“The Lord was good to me,” he said. “I’d recommend it to anyone because other than having an MRI every month, I’m fine.”

For more information about proton therapy and the services offered at the University of Cincinnati, visit their website at http://uchealth.com/cancer/centers-programs/proton-therapy.