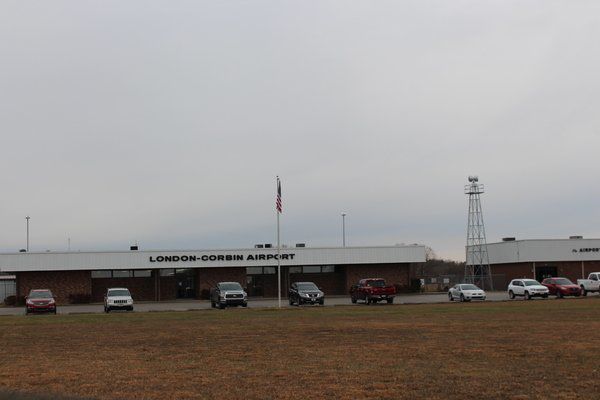 A view of the airport office from the driveway near the back of General Dynamics. | Photo by Nita Johnson 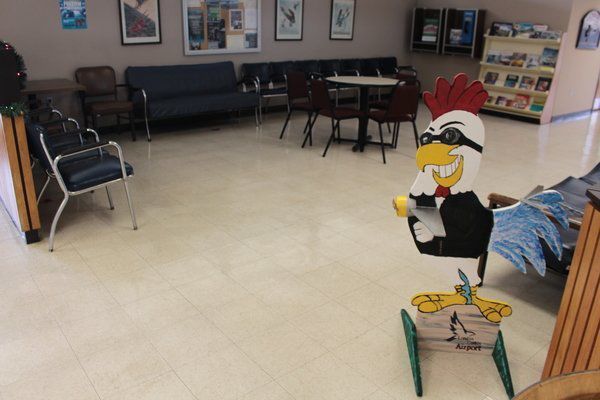 The home of the World Chicken Festival could be the inspiration for this chicken with its wings spread that sits in the lobby of the airport. T-shirts and hats bearing the name of the airport are also available for purchase. | Photo by Nita Johnson

A view of the airport office from the driveway near the back of General Dynamics. | Photo by Nita Johnson

The home of the World Chicken Festival could be the inspiration for this chicken with its wings spread that sits in the lobby of the airport. T-shirts and hats bearing the name of the airport are also available for purchase. | Photo by Nita Johnson

LONDON — It’s been called one of London’s best kept secrets.

“I go places and say I work at the airport and I’m amazed at the people who don’t realize that London has an airport,” said Airport Manager Matt Singer. “The airport has been here for years.”

The London-Corbin Airport ceased passenger planes in the early 1970s but has continued to grow and expand over those four decades, focusing instead on corporate and military flights. The Army National Guard has constructed a facility behind the airport, as has the U.S. Forest Service with its fire cache.

The airport also has 75 hangars, most of which house corporate airplanes and privately owned planes. Much of the activity at the London-Corbin Airport is oriented toward corporate flights landing and taking off from the local airport.

The airport also houses PHI Medical flights for patients who require additional treatment from hospitals in Lexington or Knoxville. It is also a site for the Manchester-based Air Evac, which also transports patients to other hospitals in the area.

One of the largest aircraft to land at the London facility came this summer and fall when Vice President Mike Pence visited the area twice - once for an appearance in Manchester in August and once in November for a bid for Gov. Matt Bevin’s re-election campaign. That brought in Air Force Two, which transported Pence and his entourage, as well as a C-17 cargo plane.

“The C-17 weighed over 425,000 pounds,” Singer said. “Air Force Two weighs around 195,000 pounds. In the summertime, the pavement heats up under the sun and a plane with the weight of the cargo plane would have have problems if the temperatures had been in the 90s or higher.”

But the local airport is not lacking in the latest technology by any means. Besides the ILS (Instrument Landing System) that provides cutting edge operations in landing aircraft, the airport also hosts one of the largest runways in the state.

“We have a 150-foot runway with a total of 5,751 feet of usable space for planes to park,” he said. “We serve a lot of corporate flights - Aisin, General Dynamics and businesses close in the area. We also have some privately owned planes that come and go from here.”

The airport also serves as a fuel station to many flights which stop by to ensure that they have enough fuel to complete their flight without additional stops. Singer again cited the landing of Air Force Two as one of those - purchasing additional fuel from the London facility.

“They had enough fuel to make it to their next stop, but they decided to go ahead and fill on up here,” he said. “That was a good sale!”

But another one of the “best kept secrets” surrounding the airport is that flying lessons are offered there.

“We don’t want that to be a secret,” he said. “People can come here and take lessons to get their pilot license. That’s a program we want to highlight.”

Other programs in the aviation system are also expanding. Singer said the vacant airport restaurant next to the office is being renovated and will house classrooms for Eastern Kentucky University’s aviation program soon. He is also working with the Laurel County School System and the Center for Innovation to expand their program to include an aviation program with the airport.

“CFI already has an aerospace program and I’m working with them on an aviation program,” Singer added.

The London-Corbin Airport also hosts an open house each year to allow the public to learn more about the operations of the facility as well as to display some of the aircraft that is housed there. That event may be delayed this year, however, due to some repairs scheduled for early spring.

“We’ve been fortunate to get grants to improve the airport. In April or May we’re going to be closed for a few weeks while they repair the pavement,” Singer said. “They’re going to level out the base and resurface, then reset the lights. It could be five weeks if the weather holds out. At least we hope it won’t be any longer.”

Until that time, however, Singer and the other airport staff remain hopeful for future growth of the facility and to continue to highlight the beauty and businesses that keep London and its surrounding areas prosperous and definitely on the map.