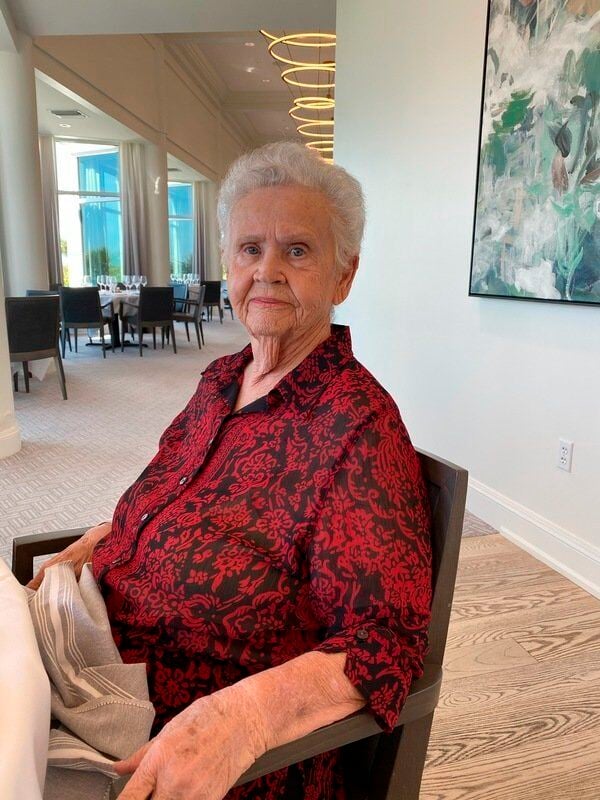 Before 1990 First Baptist Church in Williamsburg had never elected a female deacon, that was before Jo Florence Cordell was elected that year. | Photo Contributed 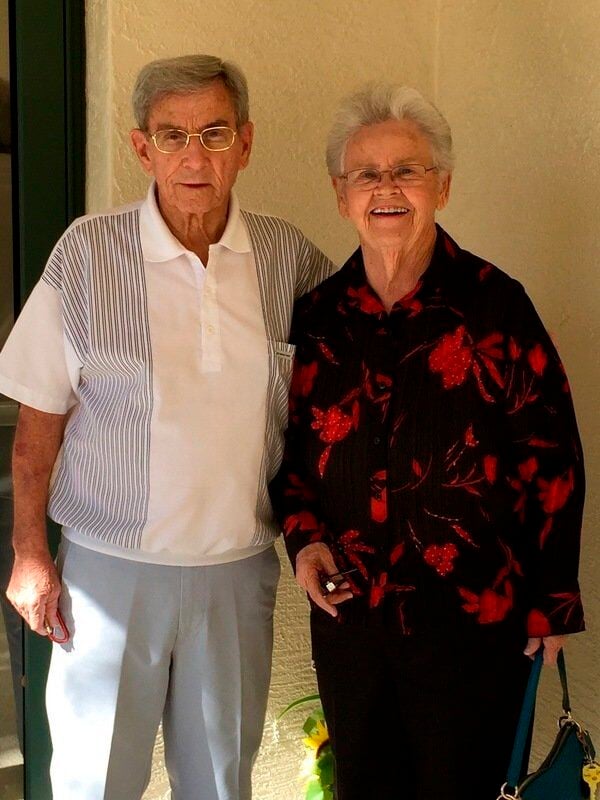 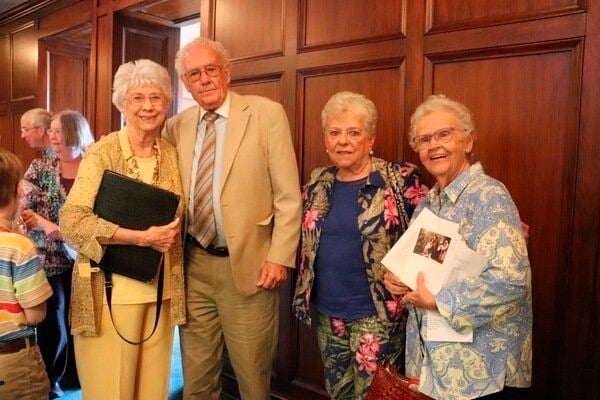 A great lesson as Cordell calls it from the current state of the world is finally learning that the church is not in the building. | Photo Contributed

Before 1990 First Baptist Church in Williamsburg had never elected a female deacon, that was before Jo Florence Cordell was elected that year. | Photo Contributed

A great lesson as Cordell calls it from the current state of the world is finally learning that the church is not in the building. | Photo Contributed

2020 marks the 100th anniversary of the ratification of the 19th amendment guaranteeing women the right to vote. In honor of this, The Times-Tribune is highlighting women throughout the year who are movers and shakers, inspirers and game changers in the Tri-County in a series called "Year of the Woman".

Cordell, of Williamsburg, has built a firm foundation of Christian values and simple kindness.

A church leader and trailblazer, teacher, counselor, family member and friend to many, Cordell was called to serve others from an early age.

Kristin Smith, a student of Cordell’s, said very few can get the balance of kindness and meeting a student where they’re at while at the same time demanding excellence. According to Smith, Cordell could do just that. She was full of kindness and you wanted to make her proud.

While Cordell came from a long line of very influential business folks, especially those of the lumber business, she’ll tell you the most influential thing in her life is a collective group of people—those at First Baptist Church in Williamsburg. She’s been going there since she she was in the nursery and she became a Christian at the age of 13.

“After I became a Christian, my life changed,” Cordell told the Times-Tribune during an interview inside her Whitley County home.

Watching her mentors do mission work in and around the outskirts of the county lit a fire inside Cordell. It wasn’t long after watching those mentors that she would spend her teenage years volunteering her time outside her home church traveling to county churches having devotionals with those close in age to her.

“The churches didn’t have the opportunity to really minister to young children then,” said Cordell. “I certainly enjoyed that. I think that sort of prepped me to become a teacher.”

She remembers an older Sunday School teacher telling her with a shaky voice that for every individual God has a purpose. Early in life Cordell knew that people were her purpose. Whether she was helping her neighbors in rural Whitley County come to know Jesus through devotionals or random pickup truck rides back to her house to watch television for the first time or through her teaching or counseling Cordell left an impression on young men and women wherever she went.

“People in our church were such good mentors,” she said. “They really nourished us, helped us set our goals and helped us know it wasn’t just about us. I feel all of us have a calling. I do feel I was called to teach.”

During her career in the Williamsburg Independent School District, she taught English, sociology and psychology. She went on to become a counselor and sat on the board of trustees for the University of the Cumberlands. She excelled in her profession and was recognized with state achievements.

Teachers often deal with more than education. Cordell said once during her teaching career when a student confided in her that things in their house were a mess, Cordell with and empathic ear consoled the student saying, well you know things are a mess at my house too right now.

Today some of her greatest joys in life include seeing her former students and catching up with what they’ve been doing in life.

Smith grew up having Cordell in school but she also grew up admiring her in the church. Smith like Cordell grew up attending First Baptist Church in Williamsburg.

Before 1990 First Baptist Church in Williamsburg had never elected a female deacon, that was before Jo Florence Cordell was elected that year.

“I felt that women had a ministry that could complement men,” Cordell said. “It takes both. So many times women have trouble and they want to talk to a woman. The thing of it is, it’s not connected to power or halos.”

In her own life, both inside and outside of the church, Cordell had both male and female mentors and she believed it was time for females to be honored the same way as the males.

“I never had anything but positive interactions with the other deacons,” said Cordell, even though not all of the other male deacons were sold on the idea of a female deacon.

One man even told her he wasn’t accepting of the idea yet. She told him that was ok, he didn’t offend her. She knew he had to work that out between him and God.

“I think about all those women before us,” she said. "My mother, your grandmother (she points to Smith) what wonderful deacons they were. They hadn’t been ordained.”

Cordell said many women were already performing deacon like roles throughout the church and she felt like it must have made the women feel a certain way, almost as if they weren’t worthy.

“Am I not worthy to go in the presence, well none of us are worthy but through the blood of Christ,” she said. “So that bothered me a lot. I feel like its not a competition its a complimentary thing.”

The ordination service was very meaningful for Cordell, she might not have dreamed of that exact moment but it was almost as if it was somewhere her subconscious knew it was achievable.

Cordell remembers the experience of women coming and laying hands on the deacons. That experience has never left her. Nor has the experience of her daddy’s tears that fell during that service. She couldn’t help but stop and stand to hug him, the man she’d looked up to for so many years both as a father and a deacon.

She doesn’t see herself as a trailblazer, rather she’s just honored and humbled.

A lot of the town people as she calls them knew what was going on with the church and some were supportive and some weren’t. One day at the grocery store she had a humorous conversation with a lady.

“I always say, if God can use a donkey, he can surely use a woman,” the woman told Cordell who thought it was true and funny. She reported the story back to her fellow male deacons who also found it to be rather comical.

Cordell and her husband Otis were married just shy of 65 years before he passed. Cordell was the city girl and Otis was the country coal boy from out in the county. When asked to talk about Otis, she said she never saw anyone she wanted but Otis.

They didn’t always have everything easy and she laughs and jokes admitting that of course they argued noting they were both two thinking individuals.

The couple moved to Florida and stayed for several years but returned a few years back.

I’ve been blessed beyond measure she said. But the independent Cordell said challenges come with growing older and while she’ll tell you she enjoys living one of the hardest things for Cordell is learning to live alone. But she’s thankful for her two sons and several grandchildren that she enjoys.

“There’s so many things to pray about,” she adds. “America has let its morals go.”

One thing, a great lesson as she calls it from the current state of the world is finally learning that the church is not in the building. She advises to stay close to Christ and encourages people to back to the basics. And a lot of that is kindness.

“There’s nothing greater than kindness,” she said. “Kindness is love in action. There’s more to it than to say I’m a Christian. Kindness is one of the most important characteristics.”

Cordell believes in sharing stories especially ones about faith.

She agrees that it’s important for women to share stories and learn from each other. She’s learned from other women through the years, claiming several as her encouragers. Cordell calls one woman her north star—Florence Young. Humility, service and courage to say what needs to be said without apologizing are some of what Cordell enjoys most in Young.

Both Cordell and Young are committed to their faith and both share stories that will make you belly laugh.