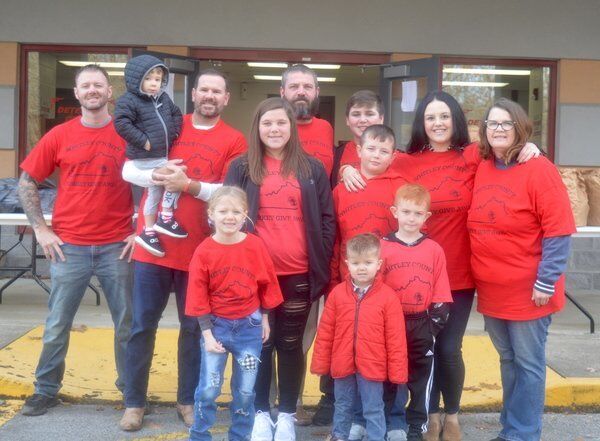 On Saturday, Whitley County Detention Center staff, inmates and other volunteers gave away boxes of food to families of incarcerated individuals and to those in need. | Photo by Jarrod Mills 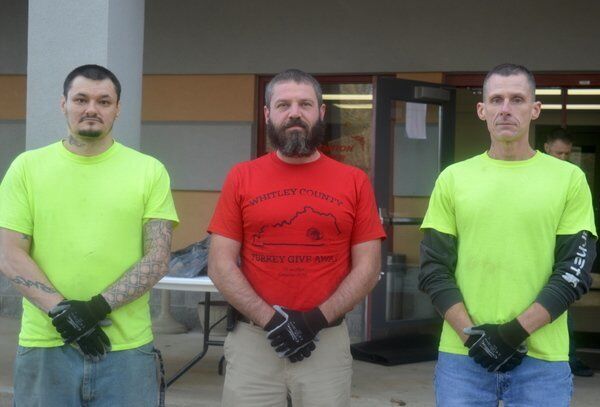 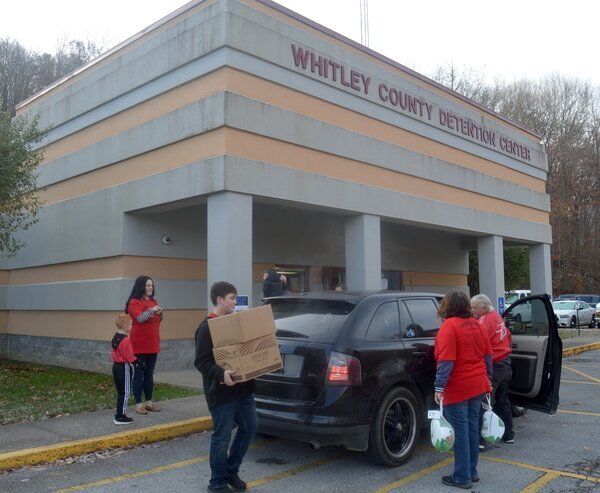 Volunteers load boxes and turkeys into a vehicle during Saturday's giveaway. | Photo by Jarrod Mills 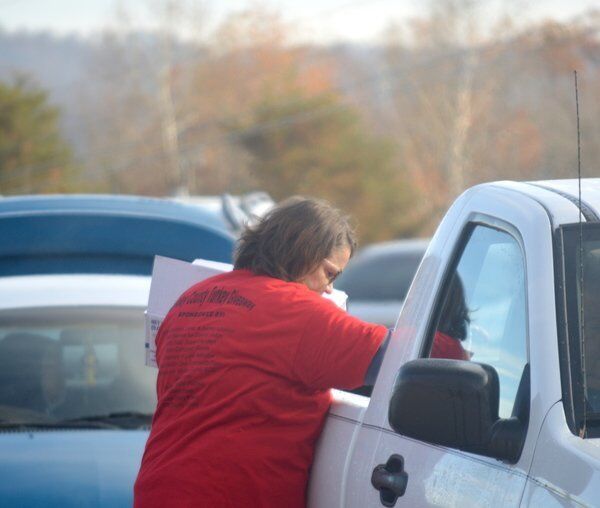 United Healthcare Community Relation Specialist and volunteer Lisa Garrison loads a food box into the back of a truck during Saturday’s event. | Photo by Jarrod Mills 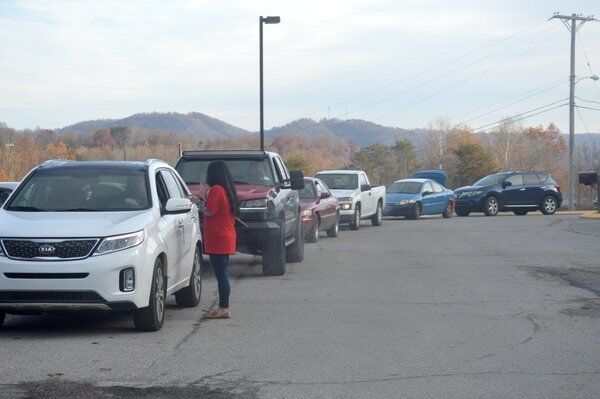 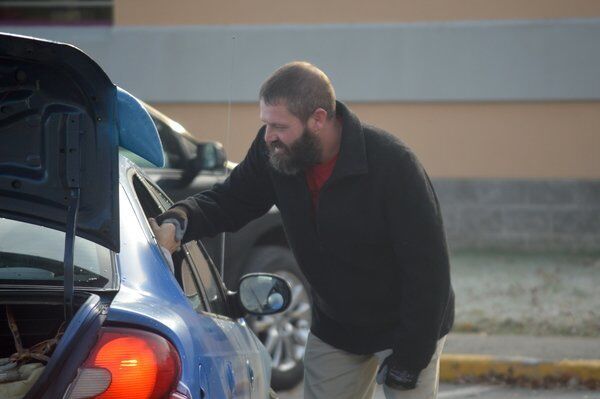 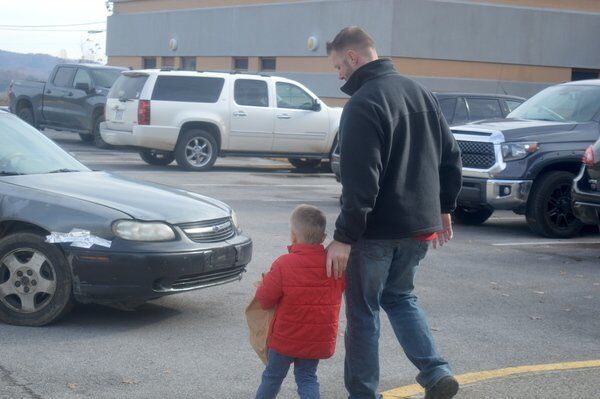 On Saturday, Whitley County Detention Center staff, inmates and other volunteers gave away boxes of food to families of incarcerated individuals and to those in need. | Photo by Jarrod Mills

Volunteers load boxes and turkeys into a vehicle during Saturday's giveaway. | Photo by Jarrod Mills

United Healthcare Community Relation Specialist and volunteer Lisa Garrison loads a food box into the back of a truck during Saturday’s event. | Photo by Jarrod Mills

WILLIAMSBURG - With the previous night’s frost still lingering, the parking lot of the Whitley County Detention Center was once again turned into an assembly-like drive-thru that saw the families of those incarcerated and in need gifted with food boxes and other gifts ahead of the holiday season.

“We’ve got turkeys, hams, stuffing/dressing, corn, green beans, mashed potatoes,” Whitley County Jailer Brian Lawson said on the food boxes he and other volunteers were handing out. “And everyone will have a pie,” he added.

Lawson said that thanks to sponsors and volunteers, the group had over 150 turkeys and hams to give to families. Lisa Garrison, a community relations specialist with United Healthcare, said her company wanted to get involved because it’s their goal to help make community members happy and healthy. She said United Healthcare helped provide around $500 worth of turkeys and hams for Saturday’s event.

“I am out here because everybody matters and families of incarcerated individuals deserve a happy Thanksgiving just like everybody else,” said Garrison, wearing the same matching red T-shirt as the other volunteers Saturday.

“I look at it like this, this is our community here,” he said. “These inmates’ kids go to school with my kids.”

Garrison said that Lawson’s wife, Ashley Lawson, and a community of women had reached out to her about the event. Integral in planning and organizing the event, Ashley previously procured the help of current Corbin City Commissioner Seth Reeves to help sponsor the event. Reeves had helped sponsor a similar giveaway the Lawsons had organized last year and said he saw the events as great ways to give back.

“It’s just a great event for the community to help these families that are affected by incarceration, or just people that are less fortunate than others,” said Reeves, who also has previously filed his intent to run for District Judge of Whitley and McCreary Counties.

“It was kind of last minute last year, so this year with COVID and everything, we got together about a month ago and started planning it and figuring out how we could make it bigger and better,” Reeves added.

The event also received helped via Linda Davis, Stephanie Kingsley and Angelika Weaver who provided coloring books, and other educational activities in gift bags handed-out to families. Lawson said he and Ashley had also gathered some old toys to donate in the gift bags, as well.

“We wanted to make sure kids get a little something, too,” he said. “Because when you’re getting a food box, the kids don’t always understand the value of that.”

Lawson said that he and his family have always made a point to try and give back to the community. He said in the past, they had been involved with helping sponsor and run a community dinner held at Whitley County High School, which was started by his brother, then-principal Bob Lawson.

With COVID cancelling last year’s dinner, Lawson said he and his family began thinking of other ways to give back to the community and the idea for the giveaways were born. Since then, Lawson, volunteers and jail staff have given away backpacks, toys, food and other items to families in Whitley County during multiple giveaway events.

And while helping provide a warm, nutritious meal for families to eat on Thanksgiving is an admirable cause, Lawson says it goes beyond that for him.

“I think if you look around our country and see everything that’s going on, we need more time at a kitchen table,” he said. “We need to get back to sitting down as a family and getting that close-knit family time and instilling those values in our children and in our families,” Lawson added. “We need to get the family part back in our homes.”

Just like similar events held in the past, Lawson said detention center inmates helped assemble the boxes and helped with a lot of the “behind the scene” things needed to make Saturday’s event possible. As Lawson and the other volunteers interacted with those in vehicles, inmates Greg Jacobs and Shawn Dople stood in the jail’s lobby filling boxes per attendees’ request. They then handed the boxes to a volunteer, who would deliver them to a vehicle.

“One of the things that we value in incorporating inmates into these activities, they don’t get a lot of recognition, but they’re behind the scenes putting these boxes together and doing a lot of work to make these things evolve and be able to come together,” said Lawson. “They feel like they’re giving back, it gives them some self worth,” he added on what inmates who have volunteered had told him. “I just think that’s an awesome thing for them to be doing.”