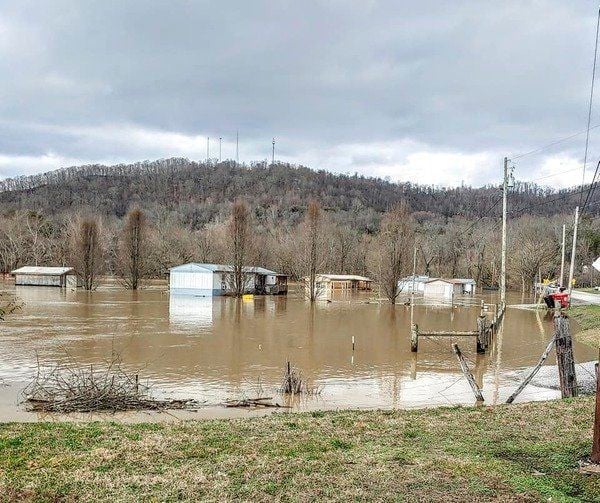 Homes on 92E at Jackson Subdivision. | Photo by Rebecca Conn 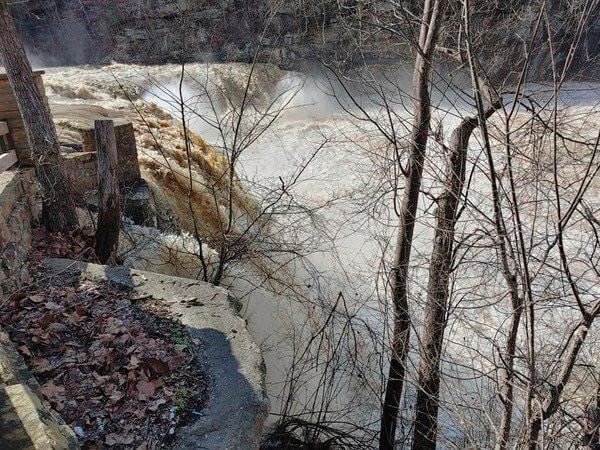 Cumberland Falls was in full force on Saturday. | Photo by Rebecca Conn 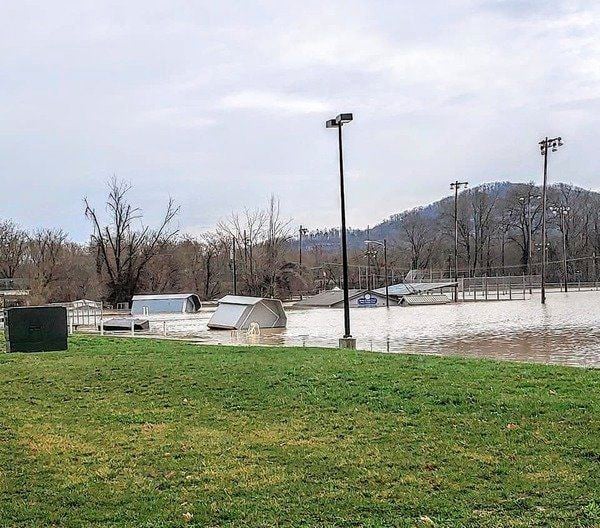 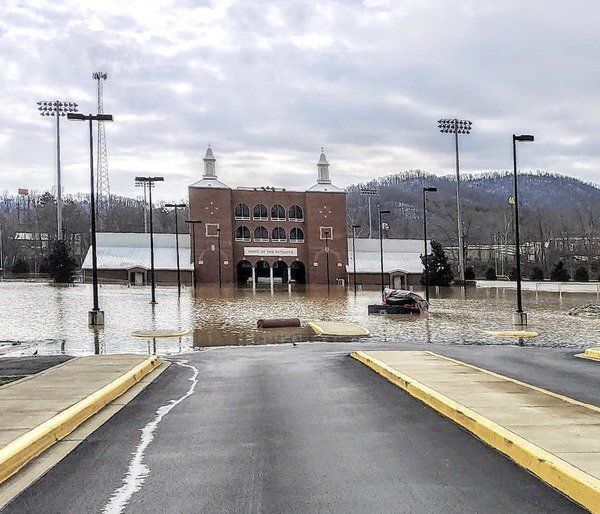 University of the Cumberlands Football Stadium. | Photo by Rebecca Conn 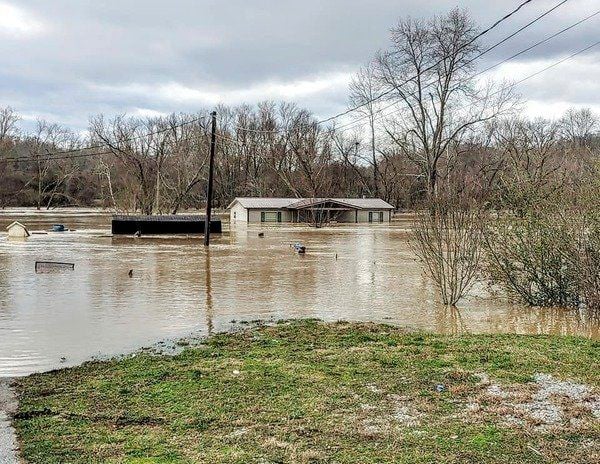 Home on 92E at Jackson Subdivision. | Photo by Rebecca Conn 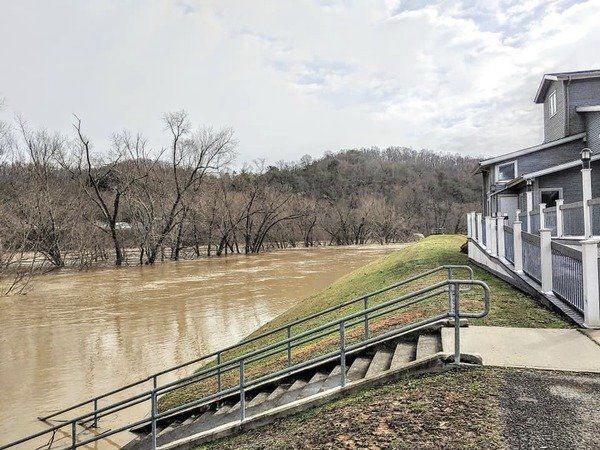 The backside of the Merry Jefferies Center on the flood wall. | Photo by Rebecca Conn

Homes on 92E at Jackson Subdivision. | Photo by Rebecca Conn

Cumberland Falls was in full force on Saturday. | Photo by Rebecca Conn

University of the Cumberlands Football Stadium. | Photo by Rebecca Conn

Home on 92E at Jackson Subdivision. | Photo by Rebecca Conn

The backside of the Merry Jefferies Center on the flood wall. | Photo by Rebecca Conn

Last week, Whitley and Knox counties and surrounding areas saw some of the worst flooding ever recorded for the region.

“When you drove up KY 92 [Sunday] and Saturday evening it just looked cataclysmic,” said Whitley County Judge Executive Pat White Jr. “It was scary. Homes were in water, barns were in water. We had buildings that have been moved by the water and caught in the trees that normally line the river that are now hundreds of feet from the river.”

According to the National Weather Service (NWS), the Cumberland River crested at 34.8 feet Saturday, the third highest the river has ever crested. The flood of 1977 sits atop the list at 35.03 feet, followed by the 1886 flood at 35 feet.

The NWS reported the Cumberland River cresting at 40.01 feet over the weekend in Barbourville. This is the 10th highest crest of the river in the city’s history. The NWS reported the river crested in Pineville at 1,019.06 feet Thursday evening, the second highest the river has ever crested there. The flooding caused the city of Pineville to close one of its floodgates for most of Thursday afternoon — the first time the floodgates had ever been used.

Knox County Judge Executive Mike Mitchell said on Thursday that some Knox Countians were without clean water, as some of the county’s water lines were either damaged or washed away during the flood. As a result, county officials set areas to distribute bottled water.

Officials in Williamsburg partnered with the Red Cross in opening a reception shelter at the Kentucky National Guard Armory on Hurricane Hollow in Williamsburg last week.

White said he had met with representatives from Sen. Rand Paul’s office and U.S. Congressman Hal Rogers’ office in an attempt in getting President Donald Trump to sign a Presidential Disaster Declaration for our area. This would also help in procuring FEMA funds, said White.

“There are some threshold requirements, you have to have a certain amount of damage before the resources can be mobilized. Right now, we’re trying to document damage and trying to put together what damage this has caused and trying to reach those threshold numbers so we can get both the local government and our citizens some assistance,” explained White.

White said he has also been working with Kentucky Emergency Management (KYEM) in recording the damage suffered around the county. So far, White said around 35 of Whitley County’s homes and a few businesses had been damaged as a result of last week’s flood.

White has also been teaming up with KYEM in keeping track of the Cumberland River’s forecast this week.

White said the weather system that moved through Monday wouldn’t raise the river’s level significantly because all of the upstream tributaries had subsided to normal levels over the past couple of days.

The second weather system, which is set to hit our area Wednesday, has the potential to raise the river back up to where it was Monday morning.

Currently the NWS has a flood watch in effect for Knox and Whitley counties through Tuesday morning.

The flooding was bad enough that Kentucky Gov. Andy Beshear declared a state of emergency Friday.

“By declaring a state of emergency, I am enabling the mobilization of state resources to be utilized in support of cities and counties in need,” said Beshear. “We are acting swiftly to ensure the safety and security of Kentucky families and communities that have been impacted.”

To date, four cities and nine counties have declared a state of emergency in response to the flooding. Both Knox County and Whitley County are among that group.

The Governor and KYEM Director Michael Dossett said on Monday that state and local officials continue to monitor flooding conditions from last week’s severe weather event and prepare for the potential heavy rain forecast for this week across the Commonwealth.

“We urge citizens across the Commonwealth to stay vigilant, monitor their local media, listen to local authorities, and heed weather warnings over the next several days,” said Gov. Beshear via a press release Monday. “I declared a state of emergency to allow effected communities to utilize state resources and we will continue to act swiftly to ensure the safety and security of Kentucky families and communities.”

The Kentucky Transportation Cabinet is continuing to remind drivers to stay cautious and vigilant as debris and some high water is still possible on roadways.

Community members and local organizations are teaming up to help in the aid following the flood. Main Street Baptist Church is accepting financial donations to pass along to those in need and will have resources available. For more information call 606-549-2006.

CedarRidge Ministries is accepting donations of clothing and household items for those victimized by the flood.

The Red Cross will also be accepting financial donations. The organization has also set up a hotline for those in need and to document damage. The hotline number is 859-428-8345.

Judge White also asks that you call his office at 606-549-6000 to report any damage caused by the flood.

John Henry McGeorge, 88, of London, passed away Friday, July 10, 2020, at St. Joseph - London. He was born on July 10, 1932, in Jackson County, Kentucky, the son of the late Robert and Edith Woods McGeorge. He is survived by his wife, Lillie Mae York McGeorge of London, four sons, Charles Mc…

Daphean Audrey Clouse passed away on July 14, 2020 at Morning Pointe Assisted Living in Powell, TN. She was 91 years old. Daphean was born in Whitley Co., KY outside of Corbin, KY on June 28, 1929 to Rotha and Jess Reeves. She was preceded in death by her husband Homer Allen Clouse in 1984, …