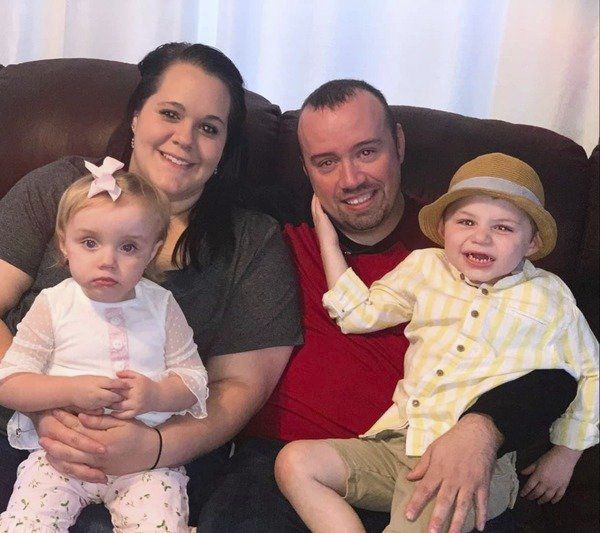 Rob Reynolds and his family. Reynolds says he's nervous of contracting the virus while on the road working, and bringing it home to his wife and children. | Photo contributed 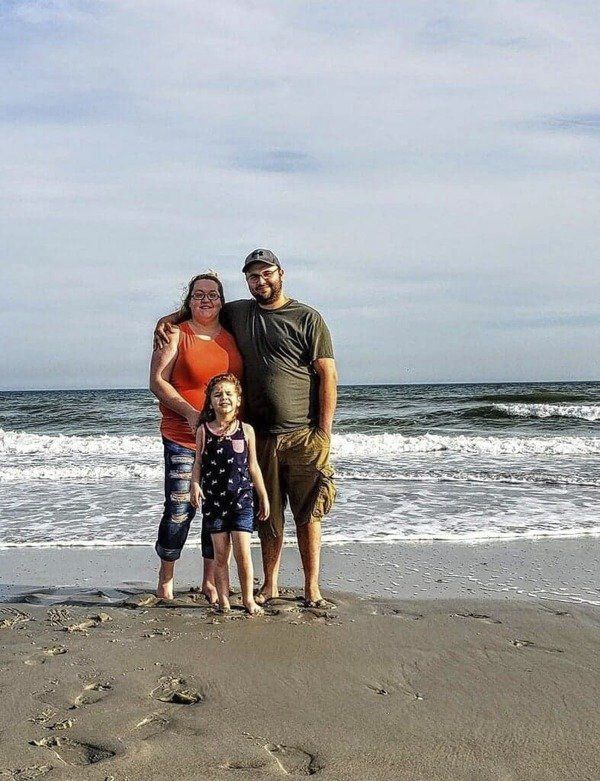 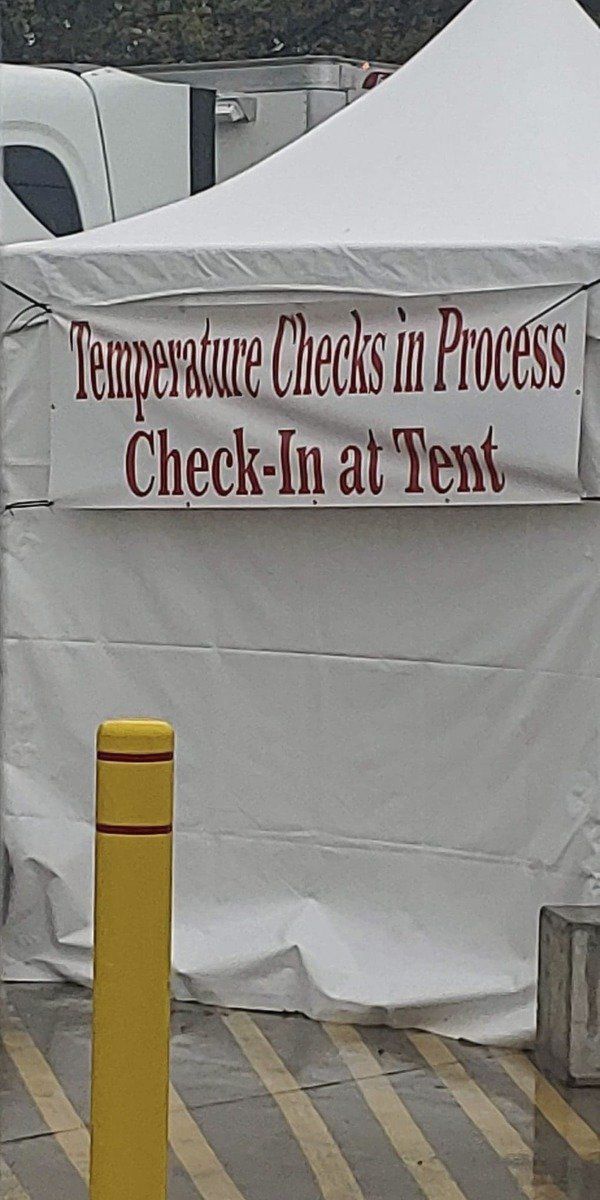 Pictured is the tent Ostering entered to have his temperature checked before he enter a Walmart Distribution Center in Ohio. | Photo contributed

Rob Reynolds and his family. Reynolds says he's nervous of contracting the virus while on the road working, and bringing it home to his wife and children. | Photo contributed

Pictured is the tent Ostering entered to have his temperature checked before he enter a Walmart Distribution Center in Ohio. | Photo contributed

While most of us continue to only leave our homes for essentials and to travel to work, America’s truck drivers continue to work hard to ensure that those products deemed essential are still stocked on shelves.

Roy Reynolds, a native of Knox County's Cannon community, became a truck driver three years ago while searching for a better paying job to help support his family. He eventually made his way to working for Schneider National hauling freight for the Walmart Distribution Center out of London. He says he enjoys driving a truck for a living because of the freedom it provides him.

“You don’t have your bosses on your back all the time,” he explained. “Some of the places I used to work, the boss is on you all the time.”

Reynolds drives regionally, meaning he delivers freight to surrounding states like Tennessee, Ohio, and North Carolina. As a result, the father of two says he’s home most nights, but that there have been some occasions when he has had to spend the night in the bunkbed of his truck.

“There’s some days I might not get back, I have to sleep in the truck,” he said. “Right now it’s hard to get a hot meal, so we have to eat snacks like cakes, and stuff like that.”

Reynolds admits that he’s heard stories of other drivers being refused service at restaurants during the pandemic. Because restaurants have been ordered to close their dining rooms, customers are forced to order through drive-thru windows. An option Reynolds says can be problematic for truckers.

“There’s some restaurants that don’t want to serve drivers. We can’t drive through a drive-thru with our big truck, and they don’t want us to walk through and place an order and stuff. There are some Pilots and Loves [truck stops] they’ve got some places inside that serve food and stuff, but that gets old after a while, and you want to try something different,” he said.

While Reynolds hasn’t had the unfortunate experience of being denied service by a restaurant, Shawn Ostering, a London native and driver for Millennial Transport out of Corbin, has.

Ostering told the Times-Tribune that he’s been turned away multiple times. On one occasion, at a place where he says he delivers freight to often, he was refused permission to use the facility’s restroom. Something he says never happened before the pandemic.

“I left there and bobtailed to the Taco Bell, which I always go to and they wouldn’t serve me through the drive-thru. They just said it was policy,” Ostering said.

Ostering is an over the road driver, meaning he transports freight to places all over the country. While with Millennial Transport, Ostering says the furthest away he regularly travels is Texas. However, before working at Millennial, Ostering worked for US Express where he says he drove to states as far away as Oregon, Washington and California.

Ostering, like Reynolds, first got into driving a truck professionally as a way to make more money to support his family. He had been working in local factories before driving.

Ostering says that typically, drivers who drive over the road make more per mile traveled than those who drive locally. Although lately, Ostering has had stretches where he says he was lucky to drive the same amount of miles he had before the lockdown.

“Yeah, big time,” Ostering responded when asked if he believes the pandemic is having an effect on his routes. “All these places are closing. The ones that are open don’t have as much business. We transport a lot of auto parts and with them being closed, there ain’t no freight moving.”

“I just think it’s gone too far with all the companies starting to go bankrupt,” he continued. “I haven’t had a chance to be laid off like most drivers. I get less miles than I normally do with no incentive, no bonus, no nothing.”

Most of Ostering’s recent loads have been what he calls “broker loads.” These are loads, he says, that are listed by a broker online for companies, and truck owners/operators to claim.

“A broker is somebody that, say I worked at a factory, and I’ve got five loads that my normal drivers can’t haul. I put those loads up on the internet for these owner-operators and these other companies, and tell them they can come get it. So, I’m brokering out a load,” he explained. “And all of these brokers are paying pennies on the mile, where it used to be a dollar, two dollars a mile. You’re lucky to get a dollar a mile right now.”

“I feel like we’re being more disrespected now than we ever have. You know everybody’s praising the EMTs and the nurses, don’t get me wrong, that’s awesome,” he continued. “But you’ve got a small hospital that might not ever see a case of it, and they’re getting praised, free food, and pats on the back and we’re out here, not getting nothing. That’s what I feel about it.”

Both Reynolds and Ostering say that when they deliver a shipment, neither has to handle any of the freight inside the trailer. However, because Reynolds delivers freight to several stores out of the same trailer, he has to enter the stores to ensure freight meant for another store isn’t taken. He says that when he enters a Walmart facility he has to wear a mask.

Ostering says with Millennial most of his drop-offs are drop and hook.

“I pull into a facility, and they’ll give me an assigned parking spot, I’ll drop it, find an empty trailer, and then leave. I won’t even have to go inside, or pull up to a dock or anything,” he explained.

However, on Wednesday morning Ostering delivered a shipment to a Walmart Distribution Center in Ohio. Before he could even enter the property, he says he was stopped by security guards wanting to check his temperature.

Both Ostering and Reynolds say they have noticed a decrease in traffic while working. Reynolds, who usually drives nights, says when he drives home during the morning rush hours, he hardly sees anybody on the road. Ostering has had similar experiences in larger cities as well.

“I can go through Cincinnati at 7:30 in the morning and not hitch the brakes. Before this stuff right here son, you’d be backed up in traffic for an hour,” he said. “I went down to Atlanta about two weeks ago. At 2:30 in the day, I could get around I-285 almost full speed. That’s unheard of.”

While truck drivers continue to drive long distances and deal with things like being refused service and broker loads, Reynolds says his biggest worry is contracting the virus and bringing it home to his family. He and his wife have even taken precautionary steps to ensure it doesn’t happen.

“It makes me nervous thinking I could bring it home to my family,” he said. “I’ve got two babies, and I don’t want to give it to them.

"It makes me nervous, coming home to see my babies, and my wife,” he added. “I get her to stay at her mom's more than what she usually does. I come home, and my kids when they see me, they’re happy to see me, and I want to hug on them and love on them and stuff, but I really can’t do that because I don’t want them to catch it.”