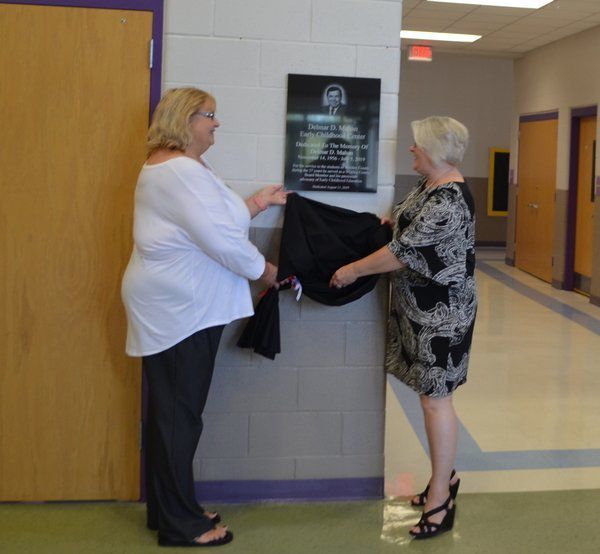 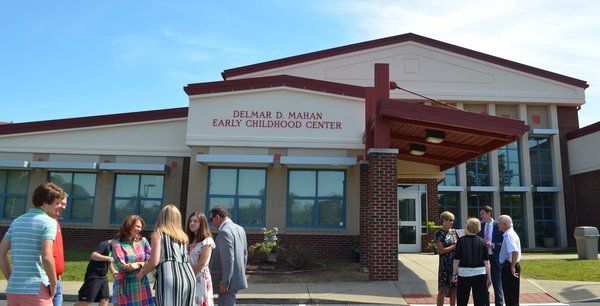 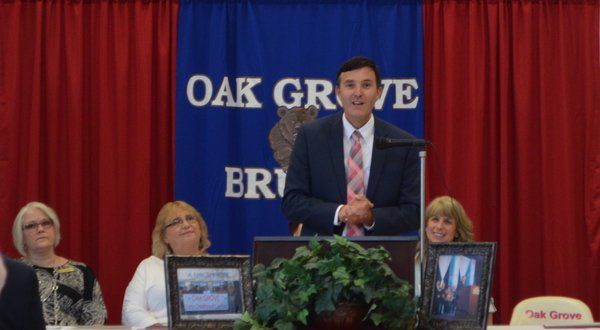 CORBIN — Laughter, tears and memories filled Oak Grove Elementary School on Saturday morning as the Whitley County Board of Education held a special-called meeting to honor late board member Delmar Mahan. The board voted unanimously to name the preschool wing of the elementary school the Delmar D. Mahan Early Childhood Center.

“The first time I met Delmar was when I was playing high school basketball with his son, Josh, at Whitley County High School,” Whitley County Superintendent John Siler shared with the audience in attendance. “Delmar was always one of the people who stuck around and encouraged us after ball games. There was a certain occasion after a pretty tough home loss… I remember him coming and putting his arm around me, and I think Delmar knew that I was upset and disappointed. He took that opportunity, like so many leaders do, to encourage me.”

Mahan, a board member for nearly 27 years, began his tenure with Whitley County in January 1991, serving various positions on the board, including chair.

“If you look back on his 27 years of service, when he first started our district was not in a great place,” said Siler. “The improvements, the facilities and different things that this district experienced, he had a huge hand in that. He had a purpose and belief that the students in Whitley County not only deserved to have the best, but that they could be some of the best.”

Mahan spent nine years on the Kentucky School Board Association’s (KSBA) Board of Directors in several positions, and even served as president. Executive Director of the KSBA Kerri Schelling said of Mahan’s time at KSBA, “Delmar was passionate in his belief that public education had the power to change people’s lives. During his presidency he [traveled] all across our state more than once, sharing his personal story, encouraging that everybody could graduate and go on to do whatever it is they wanted to do.”

“He also helped us at KSBA receive a grant from the PEAK Foundation that allowed us to provide training in every district in the state around the importance of high-quality, early education. He made good on that belief, not just locally, but truly statewide. He was one of the best champions for public education our students could ever ask for.”

“Towards the end of his service as a board member he would talk, even at opportunities that may have not been on the agenda,” Siler laughed, “But he would bring up the importance of supporting public schools in the state of Kentucky. He was very much an advocate for public schools. I think that naming the wing of this building after Delmar is such an honor. It’s so fitting for him.”

Mahan was also the recipient of the 2014 Warren Proudfoot Award sponsored by the Kentucky Parent Teacher Association, an award given to school board members who exhibit distinguished leadership and community service.

“I’ll never forget that when it was time for him to get on stage to receive that award,” said Whitley County Board of Education Chair Brenda Hill. “The ballroom was full of people, and rather than going up there by himself, he insisted that J.E. Jones, Larry Lambdin, Malorie Cooper and I go up on stage with him to receive that award. He said ‘I can’t accept this award by myself, because I’m part of a team. We work together as a team.’ He was a great team member, a great team leader, and he was a great person. I’m proud to say I served on his team.”

Of those in attendance were Mahan’s family, friends, associates, and loved ones.

“Oak Grove holds many great memories for me and my brother,” said Joanna Mahan-Middleton. “Now it’s going to hold something much more significant. Dad would be so proud of that, but like Kerri said, it would be hard because he wouldn’t want to be in the spotlight.”

“I grew up watching him work to improve all of the schools. He wanted the students of Whitley County to have the best education, facilities and opportunities possible. His passion and dedication to making a difference was a big part in what inspired me to become an educator. We are so thankful that his memory will live on through Oak Grove, and we hope that it serves as a reminder to everyone to standup for what they believe in, and to always put students first.”