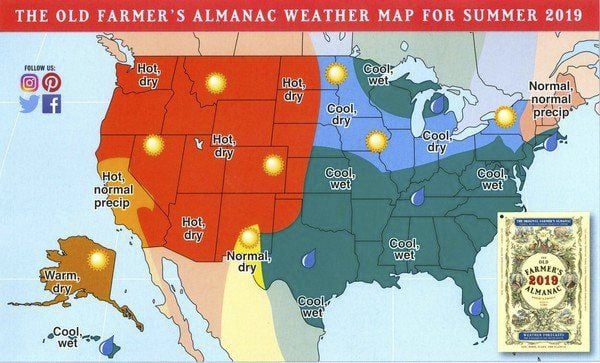 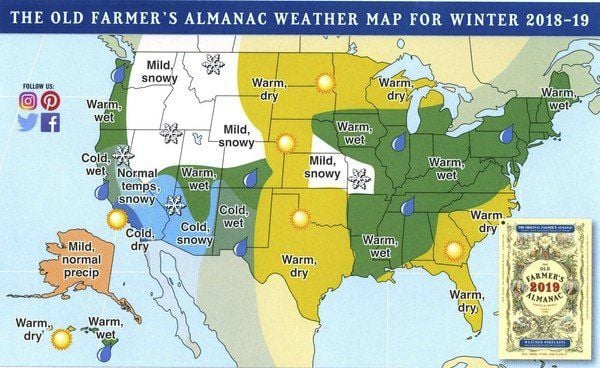 The 2019 edition of The Old Farmer’s Almanac came out in August and is predicting next year to be an abnormally wet one for Kentucky.

“Summer will be cooler and rainier than normal, with the hottest periods in late June, early and mid-July and mid-August,” the almanac forecasters said.

This year’s winter is expected to be warm with high precipitation and low snowfall. Temperatures are predicted to be cooler than normal from spring to autumn. By September, however, the temperature is said to return to near-normal levels with drier weather.

“With last winter’s La Niña likely to be replaced by a weak El Niño this winter, cold air masses will have difficulty making any prolonged inroads into the northern Plains, the Great Lakes, or northeastern states,” said the almanac forecasters.

According to the National Oceanic and Atmospheric Administration, La Niña and El Niño are opposite phases of the El Niño-Southern Oscillation cycle. This describes the fluctuations in temperature between the ocean and the pacific coast. A La Niña refers to a cold phase while an El Niño refers to a warm phase.

According to the almanac, a weak El Niño means cold air will have difficulty flowing into the Kentucky region, thus a warmer winter.

The milder weather of 2019 is cited by the Almanac to be the result of the current solar cycle, solar cycle 24. The almanac forecasters said this cycle is the smallest in over one hundred years, with relatively low magnetic activity outside of the peaks in 2011 and 2014. A solar cycle is described by NASA as an approximate 11-year period before the sun’s magnetic pole flips. According to NASA, the reversal of the magnetic poles changes the magnetic activity on the sun.

“We derive our weather forecasts from a secret formula that was devised by the founder of this Almanac, Robert B. Thomas, in 1792,” said the Almanac forecasters. The forecasters determine the year’s temperature by observing sunspots. According to NASA, sun spots are bubbles of magnetic force that trap heat and light, causing temporarily cooler regions of the sun that appear as dark blots.

While The Old Farmer’s Almanac boasts a prediction accuracy of 80 percent, meteorologists are skeptical. J. Marshall Shepard, former president of the American Meteorological Society said in a 2016 article from Country Living called “Can You Really Trust the Farmer’s Almanac Weather Predictions?”:

“The farmers’ almanacs use things like sunspots, while, for modern meteorology, we use weather forecast models that solve equations that try to describe how our atmosphere actually works.” He explained that with modern technology, you can only accurately predict the weather within the next handful of days.

In that same article, Janice Stillman, an editor for The Old Farmer’s Almanac, stressed that their forecasting methods use state-of-the-art technology.

“If I were to tell you we used the same methods we used in 1792, you might think we used the same equipment and certainly that’s not true. But the principles upon which the forecasts are made are essentially the same,” she said.