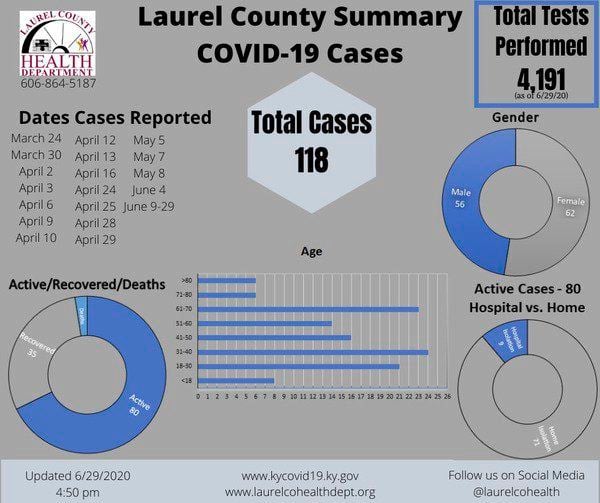 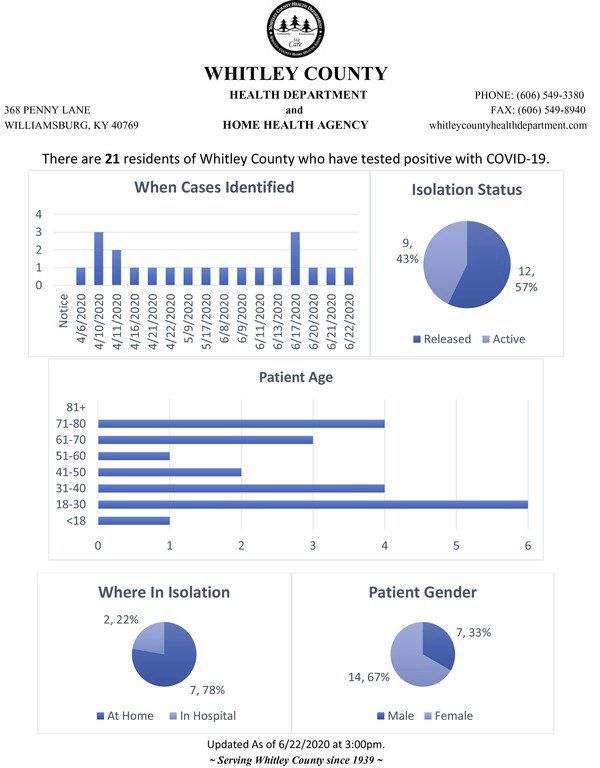 TRI-COUNTY — Over the weekend, new cases of COVID-19 were reported throughout the Tri-County, with Laurel County seeing the highest numbers.

Sunday brought two new cases, both in females over the age of 50 and Monday a total of four new cases:

Out of the new cases from the weekend, two are hospitalized and one of the previously hospitalized cases has now been released from the hospital. Laurel County has a total of 118 cases, with 80 of those being active cases.

As of 4 p.m. on Monday, Gov. Andy Beshear said there were at least 15,347 coronavirus cases in Kentucky, 117 of which were newly reported Monday.

The Governor said that one new case is from Robertson County, which means that now all 120 of Kentucky’s counties have reported at least one positive case of COVID-19.

“This confirms what we’ve been saying for weeks: This disease is everywhere and because of that we need all Kentuckians to practice social distancing and wear masks to keep each other safe,” said Gov. Beshear. “While we might see fewer cases in some areas right now, we know cases can spike quickly if we’re not careful.”

Louise W. Kidwell Carter, age 72, of Gray, passed away on Thursday September 10, 2020 at her home. She left her earthly home to join her husband, Robert Carter, who passed away just five days before her. In addition to her husband, she was preceded in death by her parents, Frank Kidwell and …

Connie Marie Coffey, 55, passed away on Saturday, September 5, 2020 at Baptist Health Corbin. Born in Covington, Kentucky, she was the daughter of the late Lonnie Breshear and Dyana Kramer. Connie is remembered as a loving wife, mother, grandmother, and sister. She nurtured and brought happi…