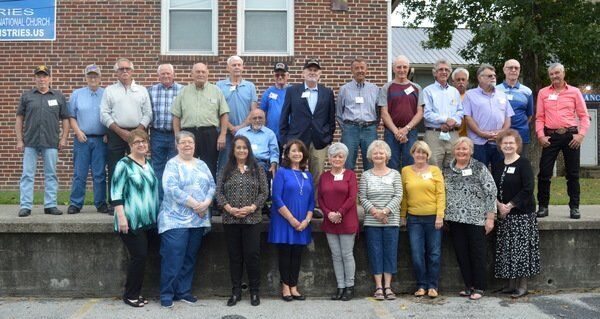 Members of Lily High School's Class of 1970 pose as a group during their 50-year reunion held Saturday. | Photo by Jarrod Mills 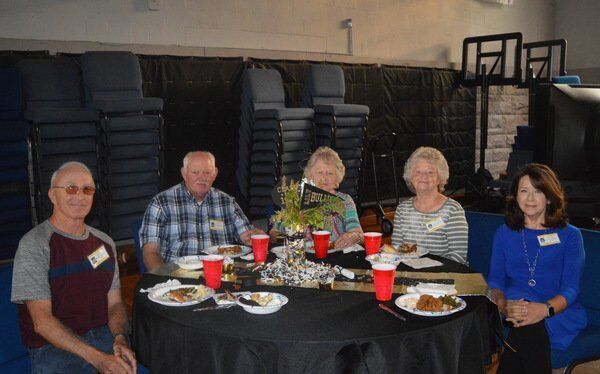 Old classmates shared a meal and reminisced on their school days at Lily High School during Saturday's reunion. | Photo by Jarrod Mills 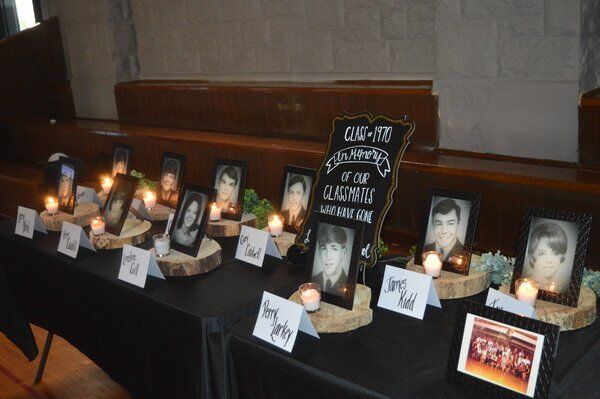 A table with framed pictures of classmates who have passed away was set up during Saturday's event honoring those lost. | Photo by Jarrod Mills 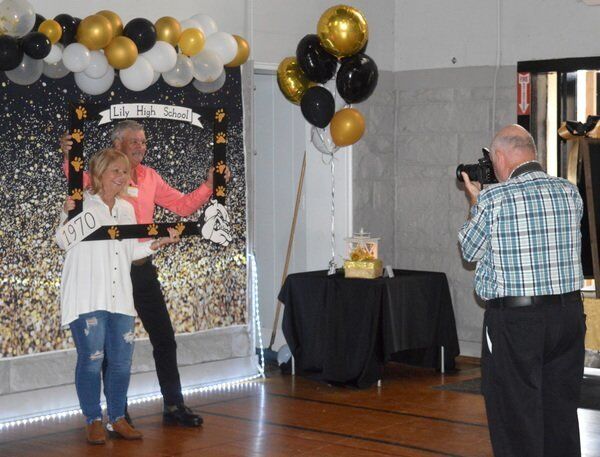 A couple of attendees take advantage of a photo-op during Lily High School's 50-year class reunion. | Photo by Jarrod Mills 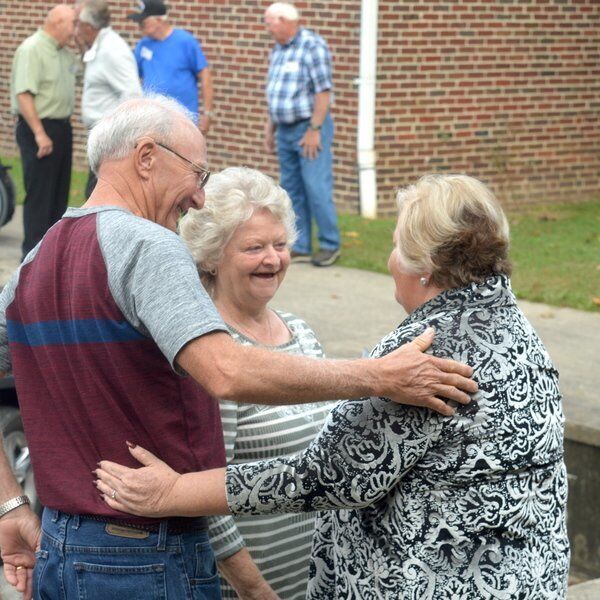 Members of Lily High School's Class of 1970 pose as a group during their 50-year reunion held Saturday. | Photo by Jarrod Mills

Old classmates shared a meal and reminisced on their school days at Lily High School during Saturday's reunion. | Photo by Jarrod Mills

A table with framed pictures of classmates who have passed away was set up during Saturday's event honoring those lost. | Photo by Jarrod Mills

A couple of attendees take advantage of a photo-op during Lily High School's 50-year class reunion. | Photo by Jarrod Mills

LILY - The old rock gymnasium located at Restoration Ministries was decked out in blue and gold decorations Saturday evening. Cutouts of the numbers “50” and “1970” dotted the gym’s walls, a slideshow illuminated old photos against another. Soft music played over speakers acted as the background for conversations centered on catching up and reminiscing as the old gym played host, like it did so many years ago, to Lily High School’s Class of 1970.

“It’s our 50-year class reunion and we wanted to get together with as many of our classmates as we could,” said Bob Patterson, one of about 40 or so former Lily Bulldogs in attendance Saturday evening. “Just being able to come back to your home school, it’s been great.”

Patterson said it was wonderful that the old building continues to serve the community through the church’s services. He said that while planning the event on Facebook, officials with the church reached out to see if the class would be interested in hosting their reunion at their old school. Restoration Ministries also catered the event’s meal. Patterson said the church was not charging the group for the use of its facilities, however a donation box was set up during the event as a way for attendees to offer their thanks for the church’s generosity.

Before the first balloon was inflated or the first center-piece was placed, Patterson said it was a challenge just getting his old classmates back together again. He said that if it had not been for social media, he doesn’t think the reunion would have even been possible.

Like most graduating classes, Lily’s Class of 1970 met at their 10-year and 20-year reunions, said Patterson. Over the course of the last four years, Patterson says a small group (made up of about 15 people or so) gather together once a year to share a meal at a local steak house or restaurant.

He said he believes it’s important for the group of former classmates to meet as often as they do because they are getting older now and many of the original group of about 80 graduates have either passed away or lost touch with the group. On Saturday, those in attendance took time to remember those classmates that have passed away. A table with framed pictures of those students was also set up in the gym during the event to honor them.

“Every time we get together, most of the people that we were going to school with are not here with us anymore,” commented James Scalf, who was sitting beside his former classmate Lester Thompson.

“It’s a valuable asset to get together like this,” Scalf continued. “Like Lester here, I haven’t seen him in years. Most of these people you don’t see but maybe once a year or less.”

“I just like seeing people that I went to school with,” Thompson added, as he reminisced with Scalf on playing basketball, baseball and football together while in school.

Roy Hamblin, who sat with Sandra Williams, Donnie Cheek and other former classmates, laughed with the group as Hamblin recalled graduating from both Lily High School and Bush High School. He says he moved following the first semester of his senior year, and as a result, graduated from both high schools. When asked about Saturday’s event, Hamblin said he enjoyed meeting with old friends and seeing how they prospered throughout their lives.

“I enjoy seeing the people that we went to school with. It makes me feel good,” noted Cheek, while Williams remembered the fashion of their high school years, recalling how female students wore skirts and dresses.

And while he remembers the sporting events, proms and other aspects of high school life, Patterson said that when he thinks back to his time at Lily High School, he remembers a former assistant principal and the way his voice used to travel.

“You’d have to know him, but he was one of these guys that if he said, ‘Hello,’ you can hear him all over the school, he talked really loud,” Patterson said. “I remember Mr. Johnson telling people to slow down or getting onto them for doing something. He didn’t need a microphone.”

When asked what he remembered about high school, Scalf recalled a former teacher who helped shape his life.

“Ms. Mable Ward, she’s the one that got me interested in reading,” he said. “I had a real rough time understanding. She gave me a book, I took it home, kept it for about three weeks. I brought it back, laid it on her desk and went to sit down. When I got up to leave, she said, ‘Here take this book and read it this time.’ And I did,” he remembered with a laugh. “That’s just the way it goes.”