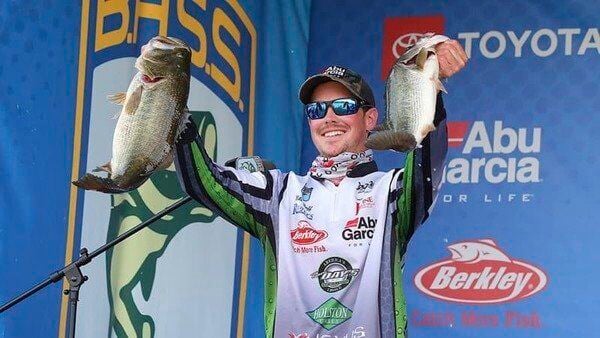 Mike Huff holding up two fish during the weigh-in of this past weekend's tournament where he finished a career best second place. | Photo contributed 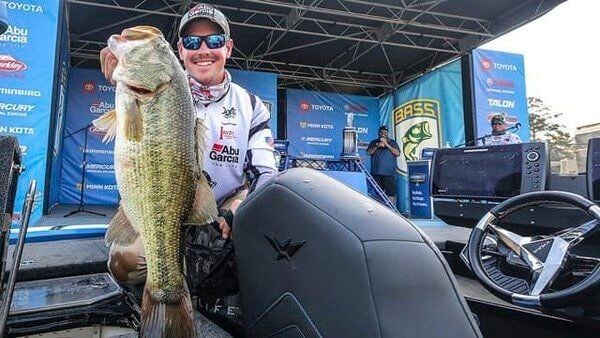 Mike Huff holding one of the fish he caught in the tournament. | Photo contributed

Mike Huff holding up two fish during the weigh-in of this past weekend's tournament where he finished a career best second place. | Photo contributed

Mike Huff holding one of the fish he caught in the tournament. | Photo contributed

Huff finished just 1 pound 12 ounces behind tournament winner Lee Livesay on Monday. The 30-year-old second-year pro said that after the previous week’s practice, he was just happy to finish as strong as he did.

“I didn’t really know if I was going to be able to even catch a fish,” Huff said on practicing, also noting that tactically most anglers fish in grassy areas and that’s what he had been focused on during practice.

“I only caught like three keepers all week of practice, so it was miserable,” he recalled.

He also focused on those same grassy areas during the tournament’s first day. As a result, Huff only caught three keepers weighing in at about six pounds, and lost two others. The most fish, or keepers, an angler can keep for weigh-ins during each day of the tournament is five.

Huff’s struggles on day one had him sitting in 50th place, but a change in tactics about halfway through the second day helped him turn things around.

“I went about 15 miles up the river and started doing something completely different, just casting a jig on a steep bluff wall bank,” Huff said. “I lucked up and caught about six keepers in about an hour doing that, and had about 12 pounds.”

Huff says that momentum carried over into the last day of the tournament and that he felt confident he could catch another limit of keepers.

“On the third day I got really lucky. Every time I set the hook it was a three and a half, four pounder. I was very fortunate there that it all came together,” said Huff. “Rarely does it happen that way, where you figure something out during the tournament hours and it works out.”

While changing up tactics helped Huff out, he admits that as the tournament went on things started getting more difficult. He says fishing on Chickamauga Lake during this time of year is already tough enough.

“It definitely got tougher with the fishing pressure and the banks I was catching them on,” he said. “I was kind of, they call it ‘beating them to death,’ because you’re bringing in so many fish off those spots that they don’t really replenish.”

Even still, Huff was able to catch the biggest fish of the tournament’s third day, a 7 pounds 13 ounce bass that netted him a little bonus money to go along with his other tournament winnings.

Huff also had to deal with the added pressure of local fans following him around on boats as the tournament progressed.

“I knew I must have been doing good because there was like 10 or 15 boats that showed up and were following and just watching,” noted Huff. “I kind of had a feeling I was doing a little better than I thought.”

While Huff’s performance is nothing to hang his head about, he admits being so close to winning the tournament and losing hurt a little bit.

“When I walked off the stage after congratulating Lee and losing, it really, really hurt for about 10 minutes,” he said. “But then I had hundreds of text messages from friends and family, and people coming up to me after the weigh-in saying they were really proud and telling me I made a heck of a comeback.”

Another perk of finishing so well is not only the exposure it brings the young fishing pro, but the confidence it instilled him as well. Finishing in the 60s during some early tournaments had his confidence a little low, admitted Huff.

Combine that new found confidence, along with the strange circumstances and changes to the ELITE Series brought on by COVID, and Huff says he is as excited as ever for his third season next year.

Huff is currently sponsored by Berkley and Abu Garcia, who he says has provided him with fishing reels, rods, and bait. He is also sponsored by Irvine Contracting out of London, who has helped him with his travel expenses this season, and he was even gifted a new Vexus bass boat to use by Day’s Boat Sales out of Frankfort.

“I’m just really thankful for my sponsors,” he said. “You can’t really be a pro fisherman without people helping you.”

Up next for Huff and the other ELITE pros is an ELITE Series tournament next month at Lake Fork in Quitman, Texas.

“It’s an awesome fishery,” he said. “But again we’re going to it at a tough time of year, probably the toughest time of year to fish it,” Huff added, noting that last year’s tournament was the only time he’s ever fished that specific lake.

Huff has also participated in some Bassmaster open tournaments this year which are typically used to earn points in qualifying for the ELITE Series for the following season. And while Bassmaster has auto-qualified all of this year’s ELITE Series pros for next season due to the coronavirus, Huff says he plans on participating in next week’s open tournament at Cherokee Lake in Jefferson County, Tennessee.

“That’s my home lake. My cousin and I had the marina on that lake, so I kind of have to fish it with growing up and fishing it all those years,” he said, adding with a laugh, “I’m not even going to practice.”