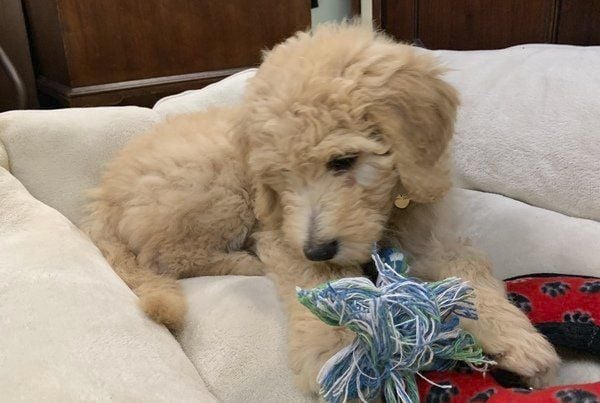 Dolly is bringing smiles to not only individuals around the funeral home but it's safe to say she's cheering up the entire community. | Photo by Angela Turner 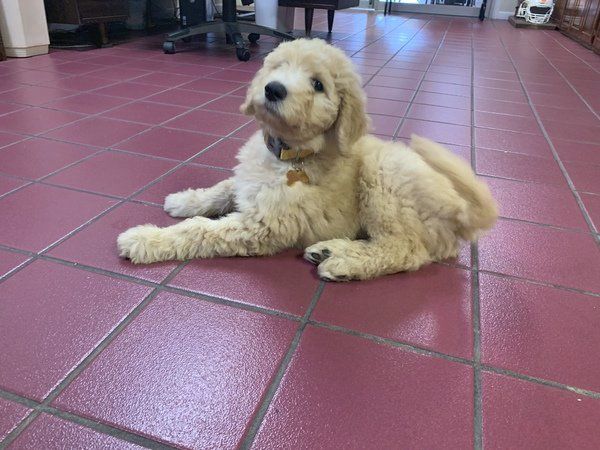 Next week Dolly will begin an intense training program to become a certified therapy dog. | Photo by Angela Turner 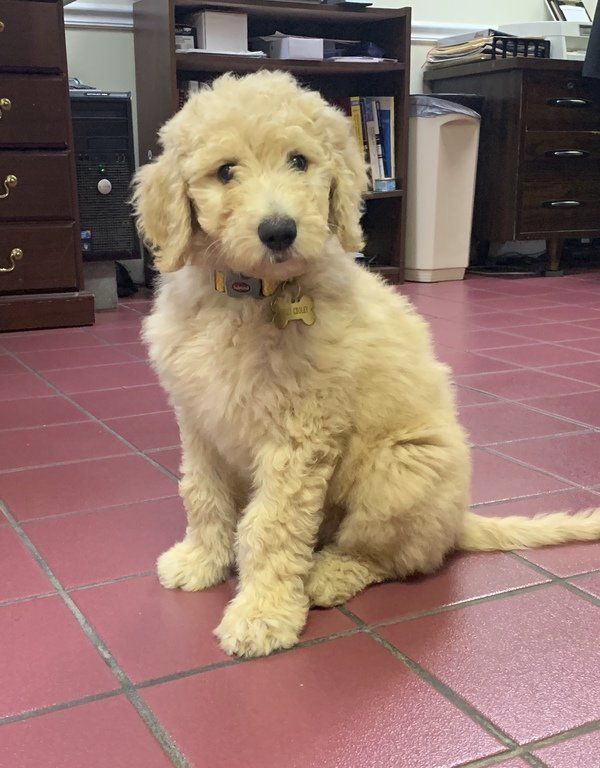 Dolly is bringing smiles to not only individuals around the funeral home but it's safe to say she's cheering up the entire community. | Photo by Angela Turner

Next week Dolly will begin an intense training program to become a certified therapy dog. | Photo by Angela Turner

WILLIAMSBURG -- "Who can't smile at a puppy," Natalie Young said about the newest addition at Croley Funeral Home.

Two weeks ago, Croley Funeral Home introduced via social media a 6-week-old Goldendoodle named Dolly to serve as the funeral home's therapy dog. Andy Croley, owner of Croley Funeral Home, said Dolly, who is now 8 weeks old, was not a decision that they made lightly.

Croley was heavily influenced by Young who had witnessed service dogs in a variety of capacities and also by a fellow friend and colleague who used a therapy dog in another funeral home.

"It's very interesting to understand what dogs do offer," Croley said.

After much research and the decision was made, several factors went into account when determining what breed of dog would best fit. Dolly is hypoallergenic, doesn't shed and is already showing off her intelligence.

Next week Dolly will begin an intense training program to become a certified therapy dog. Dolly will go to training at Off the Leash in Knoxville, beginning with weekly sessions. Dolly resides with Croley when she's not busy working at the funeral home.

Croley said he understands it's not for everyone, but in doing the extensive research it was a service that they felt like they wanted to offer, adding that sometimes you have to think outside the box.

Family members are already requesting Dolly to be at their loved ones' visitations. In the short time that Dolly has been on the job, she has already visited two families during funeral visitations and helped with one funeral arrangement.

"People are scared when they walk into a funeral home," said Croley. "They don't know what to expect, their emotions are at an all-time high and Dolly breaks the ice."

Young said Dolly is great for the children who often don't know how to respond to being at a funeral home. Young is watching Dolly be a comfort to those during their difficult time.

According to the American Kennel Association, an increasing number of funeral directors are recognizing that therapy dogs provide comfort and unconditional love to those who are attending funerals.

Croley said Dolly will make a difference, but in a more, unique private and personal way with each individual experience. Croley refers to Dolly as one of the many tools to help people get better.

"We use tools to get better in certain aspects," he said. "Dolly is a tool to get better. She's not going to make you instantly better but she's a tool to help with that."

Young said she's a natural and Croley thinks Dolly already knows her role in the business.

Growing up and owning dogs nearly all his life, Croley has been able to see the nature of how a dog and a human can interact. Croley decided a therapy dog was a comfort and could be a natural fit.

"Once they are trained, they are going to work for you," Croley added.

Dolly is bringing smiles to not only individuals around the funeral home, but it's safe to say she's cheering up the entire community. When the Times-Tribune arrived to meet with Dolly, she was busy with a visitor from a local bank feeding her treats and before the interview finished up, Dolly had other community members who stopped in just to say hello.