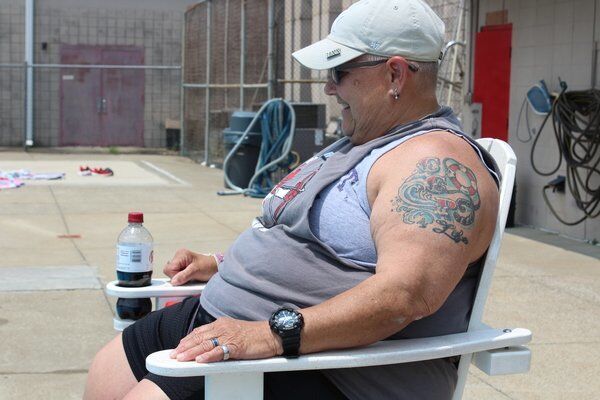 Patty Smith's dedication to Corbin City Pool runs deep, so deep that she even has a tattoo in honor of the place she has spent the last 44 summers. | Photo by Emily Adams-Bentley 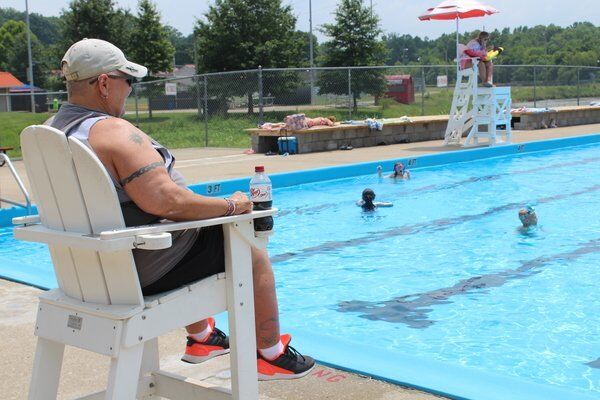 Patty Smith, known as "Putt" to most but as the "Pool Lady" to kids who spend their summer days at Corbin City Pool, has been a PE and health teacher at Corbin Middle School for the past 31 years and then spends her summers as manager of the pool. | Photo by Emily Adams-Bentley

Patty Smith's dedication to Corbin City Pool runs deep, so deep that she even has a tattoo in honor of the place she has spent the last 44 summers. | Photo by Emily Adams-Bentley

Patty Smith, known as "Putt" to most but as the "Pool Lady" to kids who spend their summer days at Corbin City Pool, has been a PE and health teacher at Corbin Middle School for the past 31 years and then spends her summers as manager of the pool. | Photo by Emily Adams-Bentley

CORBIN—Some know her as “Putt” but to the kids who spend their summer days at the pool, she is known as the “Pool Lady.”

Patty Smith’s dedication to Corbin City Pool runs deep, so deep that she even has a tattoo in honor of the place she has spent the last 44 summers.

Though most everyone in Corbin refers to her as Putt, a nickname Smith said she received in high school because she “wasn’t in any hurry to get anywhere,” she loves hearing the kids call her the Pool Lady.

“If I’m out somewhere, the kids will say ‘there’s the pool lady, the lady from the pool right there,’” Smith laughed.

Smith is originally from San Diego, California but after the passing of her father, her family made the move from the big city to a small town in Kentucky. And Smith has called Corbin her home ever since.

After graduating from Corbin High School, Smith went on to Eastern Kentucky University where she studied physical education and health. During that time, she began looking for a summer job and landed at Corbin City Pool, a place she had taken swimming lessons and enjoyed spending hot summer days as a kid.

“I just wanted a summer job,” she said. “It was in the newspaper that they were giving a lifeguard class and I’ve been here ever since.”

In 1997, 20 years after becoming a lifeguard for the pool, Smith took over as manager of the Corbin City Pool. She said she had been offered the job several times and always turned it down, until she decided “it was time.”

As manager, before the pool opens for the day, Smith will come to check on the pool water and chemicals. She’ll also check on the concessions and the lifeguards on duty that day. Smith helps keep things running smoothly throughout the day and then helps close up the pool in the evenings.

Eventually, Smith became certified to train the lifeguards at the pool and did that for many years before having hip replacement surgery in 2019. Even after having both her hips replaced, you could find Smith rolling in on a walker or with a cane for several weeks following her surgery.

“When I did teach, I taught CPR and we had a guard here that went on to be a nurse,” Smith said. “She called me the first time she did CPR on someone and she saved him. She said ‘I had to call and tell you.’”

She also said several have come up to her expressing their gratitude, as she was the one who helped save them from drowning years before.

“I’ve had kids come up to me later in life saying ‘you pulled me out, you saved me,’” she said.

Last year, it was after getting the pool ready to open that Smith received the heartbreaking news that the pool wouldn’t be allowed to open for the summer, making this year’s opening day a little more special.

“To get to come back and open for the kids, because I know how they are—not being able to go to the pool all summer, go to any pool, so it was mainly for them and those guards because they look forward to that summer job,” Smith said.

Outside of being manager of the Corbin City Pool, Smith has spent the last 31 years as a health and PE teacher at Corbin Middle School. She has also been coaching archery since it came to Corbin schools nearly 20 years ago, though she didn’t know much about the sport before taking over as coach.

In her free time, Smith also enjoyed playing softball for many years and then later, she even coached a girls softball team.

After fostering some puppies, Smith got involved with several pet rescue organizations where she began fostering rescue dogs. Currently, Smith is fostering one dog but she also has five dogs of her own, four of which are “foster fails.”

“You call them foster fails, that’s what everybody calls them because you have them for so long, you just love them and you’re like ‘I’m keeping them, sorry,” she said.

As if she doesn’t stay busy enough, on Saturdays, you will often find Smith crammed in her Jeep with crates of dogs, as she transports dogs to Lexington for local animal rescue groups like Magnificent Mutts Rescue and East Coast Boxer Rescue.

For now, Smith is soaking up what’s left of summer and her summer job as the Pool Lady at the place that has become her home away from home.

Getting to Know... is a new weekly series The Times-Tribune is introducing today. It will feature stories of people, places, events and more throughout the Tri-County. If you have suggestions for topics to be featured, email us at newsroom@thetimestribune.com or call us at 606-528-2464.