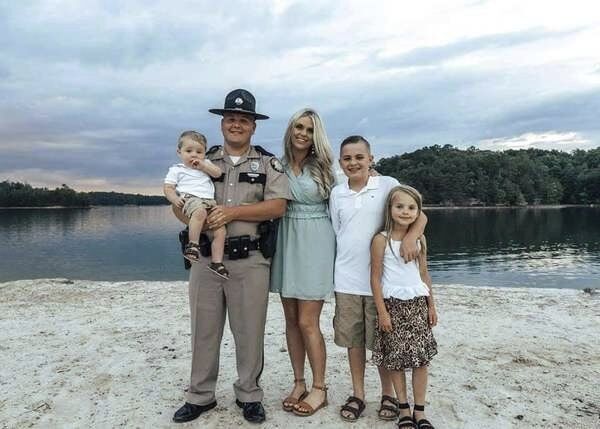 Chris and Jessica McQueen have three children between the two of them. Their children include Caleb who is 13 years old, Farrah who is nine and Logan who is almost three years old. | Photo Contributed 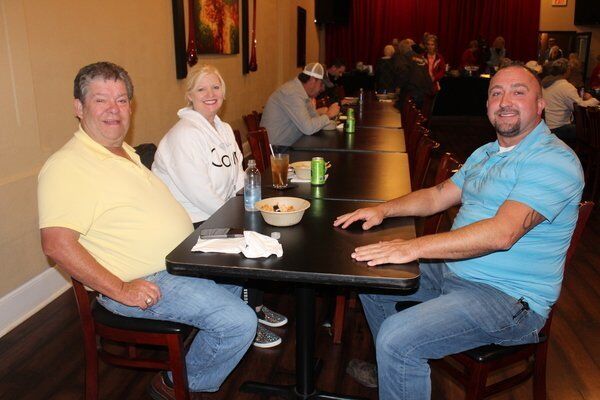 Community members came together last week to raise nearly $3,000 for the McQueen family with a fundraiser dinner that was held at the Depot on Main in downtown Corbin. | Photo by Emily Adams-Bentley 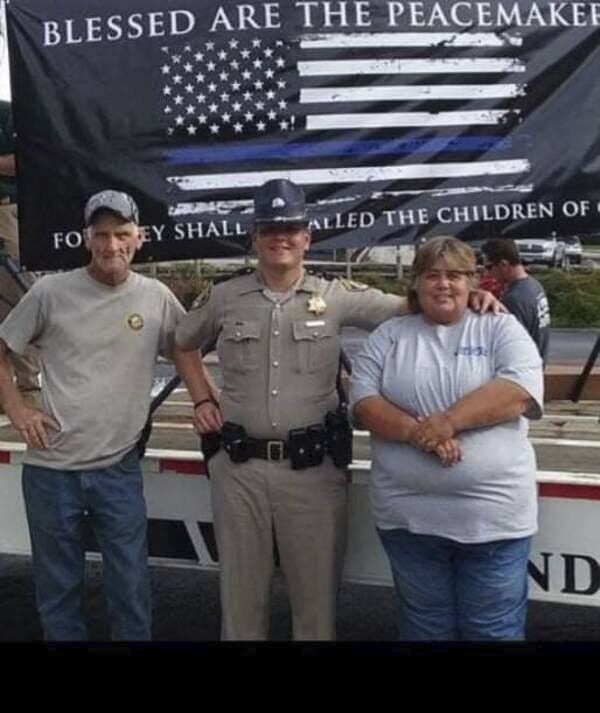 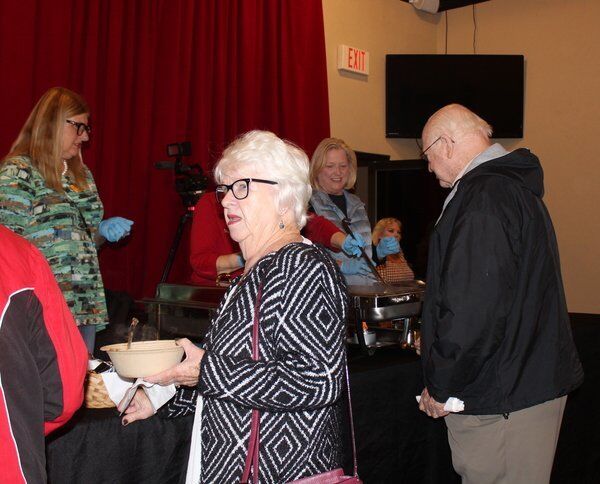 Maggy Monhollen, who organized the fundraiser in honor of Chris McQueen and his family, said approximately 100 community members came out to show their support for the McQueen family last week. | Photo by Emily Adams-Bentley 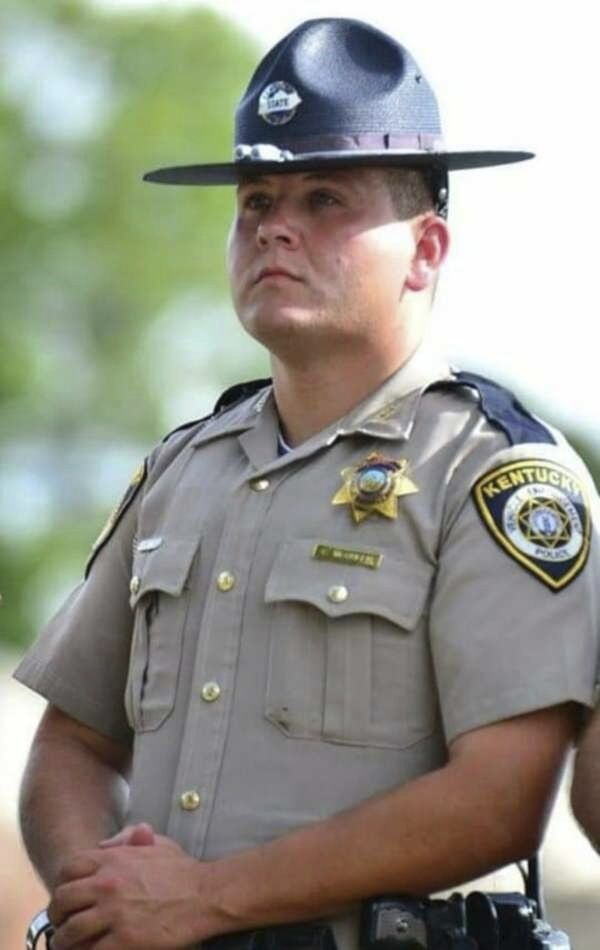 Chris and Jessica McQueen have three children between the two of them. Their children include Caleb who is 13 years old, Farrah who is nine and Logan who is almost three years old. | Photo Contributed

Community members came together last week to raise nearly $3,000 for the McQueen family with a fundraiser dinner that was held at the Depot on Main in downtown Corbin. | Photo by Emily Adams-Bentley

Maggy Monhollen, who organized the fundraiser in honor of Chris McQueen and his family, said approximately 100 community members came out to show their support for the McQueen family last week. | Photo by Emily Adams-Bentley

CORBIN—“Don’t take anyone or anything for granted because you just never know.”

That is the advice that Jessica McQueen gives to anyone she comes in contact with after spending the last nearly three months watching her husband fight for his life in the ICU after battling complications from COVID-19.

“Sometimes tragedies, they cause you to open your eyes and give you a new outlook on life and that’s what this has done for both of us,” Jessica said.

Chris McQueen is a Kentucky State Police commercial vehicle enforcement officer, a husband, a father and a lover of classic cars. He and his wife met nearly five years ago and just celebrated their one-year wedding anniversary in August. The couple have three children between the two of them—Caleb who is 13 years old, 9-year-old Farrah and their youngest, Logan, who is almost 3 years old.

Jessica noticed that not only did Chris not look well but he wasn’t acting like his normal self, either. Then, on August 25, Jessica returned home to find out that her husband had called himself an ambulance.

“He said ‘I called myself an ambulance, I’ve got to go’ and so, I panicked,” she said.

At the hospital, Chris was told his lungs were struggling to function correctly on their own and he was was eventually transported to Cincinnati, Ohio where he stayed until his most recent move to Cleveland, Ohio. For much of the last three months, Chris has been in the ICU where he had to be placed on an ECMO machine, which helped his lungs to function properly, and was told he would need a bilateral lung transplant.

Just over the last nearly two weeks, though, Chris has made some major improvements. Jessica said that Chris is now off the ECMO machine and is not looking to need a lung transplant at this time.

“Up until about two weeks ago, he had struggled,” Jessica said. “It was almost like there was no improvement whatsoever. Last week, I went there on Monday and the transplant team had got together in their group to see if he was ready to do a transplant. They apparently discussed it for hours and then they come back and the doctor told us ‘we just feel like he needs more time, he’s making progress.’”

Jessica said the next step would be to wean Chris off the ventilator.

“They told me in the beginning that this was a very slow process and it has been, we’re going into three months of this,” she said. “And we still don’t know what the aftermath is going to look like.”

“The amount of support that I have received from people, even from complete strangers, has been a Godsend,” she said. “The fundraisers people have done for us, the donations—it’s made it possible for me to be with him. The outpouring of support has been amazing and I don’t think we would have had this same support if it hadn’t been for the way that Chris treats people.”

“He is very kindhearted, very giving,” Jessica added. “He is the most selfless person you will ever meet. He always puts others first, even when he got sick, for example, he was more worried about the rest of us catching it and the effect it would have on us, not knowing he would be the one hit the hardest. That’s just who he is. He would give you the shirt off his back and I mean that literally.”

Now that Chris is off the ECMO machine, Jessica said he is much more alert and has been overwhelmed finally seeing all the love and support his family has been shown over these last few months.

“He’s just, with everything, he’s truly honored and very thankful,” Jessica said. “He tells me all the time to tell people ‘thank you’ and that he appreciates it. And I feel the same way he does. It’s absolutely amazing.”

Just last week, community members came together to raise nearly $3,000 for the McQueen family with a fundraiser dinner that was held at the Depot on Main in downtown Corbin.

Maggy Monhollen, who helped organized the fundraiser, said around 100 community members from all over the surrounding area came to show their support for the McQueen family.

“I’m really proud of our community,” Monhollen said. “People did kind of what we were hoping they would do, not only did they come eat a bowl of chili but they sat down and visited and really fellowshipped in friendship, talked to Jessica, his wife and his mom. It just gives me that sense of small town community and people taking care of each other. It really meant a lot to the family that so many people came out and were supportive.”

More than anything, Jessica said the family is asking that community members continue to pray for Chris and his family as they move towards recovery and asks that people take COVID more seriously.

“People need to be cautious—it can happen to anyone,” she said. “If you would have told me months ago that we would be living this, I would say ‘you’re crazy.’”

A GoFundMe has also been set up for the McQueen family. To donate, visit https://gofund.me/30fa292d.

Getting to Know... is a weekly series of The Times-Tribune. It features stories of people, places, events and more throughout the Tri-County. If you have suggestions for topics to be featured, email us at newsroom@thetimestribune.com.