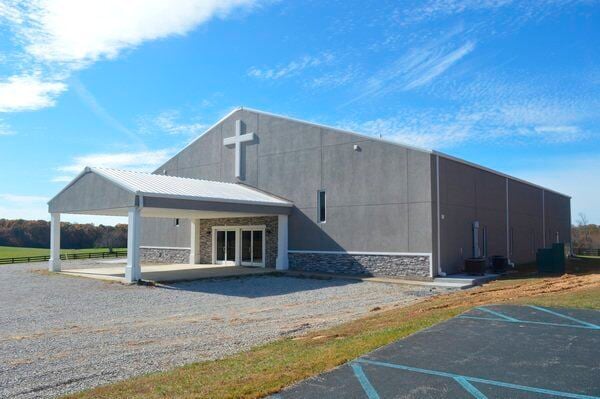 After nearly a decade of handwork and dedication, Gilbert's Chapel will celebrate it's new sanctuary with a singing this Saturday, Nov. 20. | Photo by Jarrod Mills 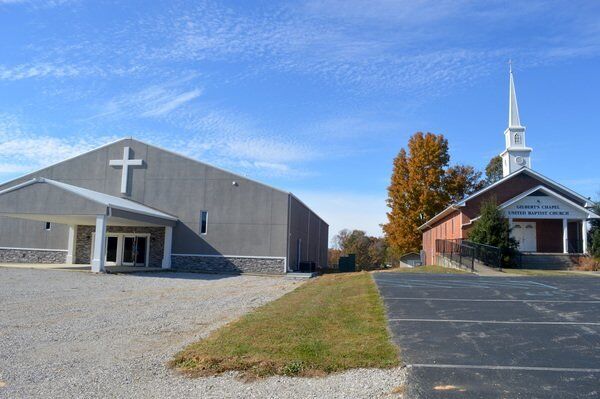 Gilbert Chapel's old and new sanctuary sit right beside each other providing both a glimpse into the church's history and its future. | Photo by Jarrod Mills 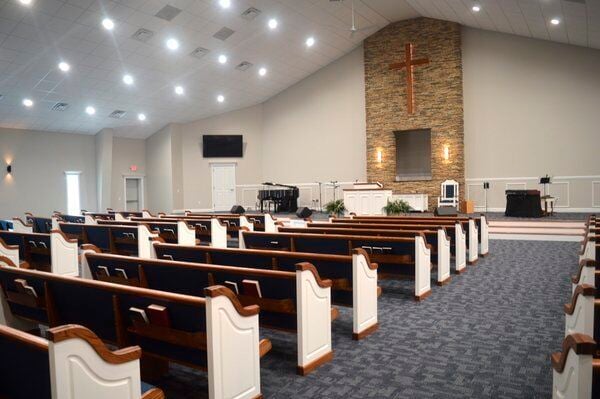 The church's congregation had been meeting outside, but moved into the new sanctuary at the beginning of the year. | Photo by Jarrod Mills 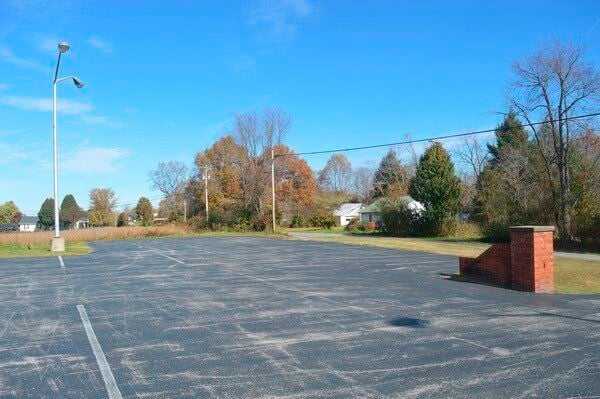 A section of the parking lot Pastor Joel Holcomb pointed to saying it was the site of where the church originally stood when it was built in 1945. | Photo by Jarrod Mills 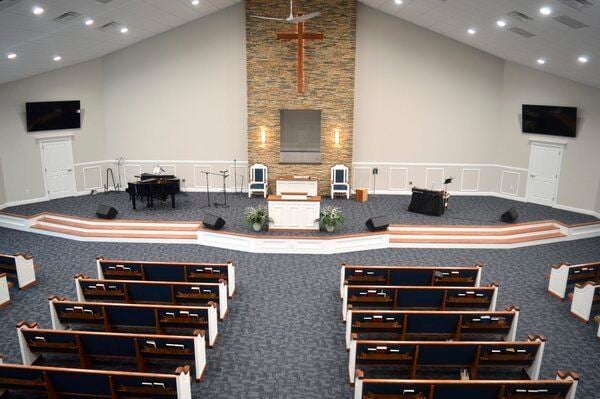 Gilbert Chapel's new sanctuary is big enough that future church members won't have to worry about outgrowing it any time soon. | Photo by Jarrod Mills

After nearly a decade of handwork and dedication, Gilbert's Chapel will celebrate it's new sanctuary with a singing this Saturday, Nov. 20. | Photo by Jarrod Mills

Gilbert Chapel's old and new sanctuary sit right beside each other providing both a glimpse into the church's history and its future. | Photo by Jarrod Mills

The church's congregation had been meeting outside, but moved into the new sanctuary at the beginning of the year. | Photo by Jarrod Mills

A section of the parking lot Pastor Joel Holcomb pointed to saying it was the site of where the church originally stood when it was built in 1945. | Photo by Jarrod Mills

Gilbert Chapel's new sanctuary is big enough that future church members won't have to worry about outgrowing it any time soon. | Photo by Jarrod Mills

LILY — “God has blessed us to grow,” said Pastor Joel Holcomb standing in the parking lot of Gilbert’s Chapel United Baptist Church. He’s seen that growth first-hand, having grown up listening to his father preach at the church he’s now pastored for the past 25 years.

Holcomb’s excited, but admits he’s also a little apprehensive about an upcoming Grand Opening Singing the church is hosting in celebration of its new sanctuary. He believes the event could be huge, drawing in a crowd that could easily fill the new 285-person auditorium. But before he starts thinking ahead to Saturday’s event, he thinks back, pointing to a corner of the parking lot.

“That’s where it used to be located,” Holcomb said on the church originally founded in April 1945. In the late 1970s, a basement was built near where Holcomb had been pointing. The old clapboard building was then moved from its original location and placed on top of the basement and sided with brick. The building received an addition around the turn of the century, but Holcomb says his congregation has now outgrown it.

“When we started this project, it was because people were coming into church and standing at the backdoor,” he said. “There was nowhere to sit but the front pew or two. It was that crowded.”

That was almost a decade ago, when church members first started working on building the new 8,000 square-foot facility. Holcomb said the group wanted to approach the project in phases, first purchasing the neighboring two acres of land next to the old brick building. They then waited and recovered financially before moving onto placing the footers and flooring of the new sanctuary.

“One of our goals was: We don’t want to stop doing what we think we should do as a church because we’re building a church,” Holcomb explained. “We didn’t want it to impact us so much financially that we felt like we couldn’t go on a mission trip or we couldn’t help at Christmas with the things we normally help with,” he added.

At one point in the construction process, after the drywall and metal framing had been placed, Holcomb said members of the church took markers and wrote prayers of what they hoped the new building would be on its drywall.

“This building’s surrounded in prayer,” Holcomb said now sitting in one of the new sanctuary’s pews. He said there had been discussions amongst church members on just using chairs in the new building, but that they ultimately decided that “it just feels more like a church when there’s pews.”

“I said, ‘I’m fine with that. I don’t care what you sit in, as long as you come and fill your seat,’” Holcomb said with a laugh. Like a lot of churches, Holcomb and his congregation are just happy to be able to worship together again under one roof. They had been utilizing microphones and FM transmitters as Holcomb preached from the front porch of the old building during drive-up services last summer. He said the church continued to meet outside even during the colder months, forcing him to seek warmth inside the old building’s foyer on a couple of occasions, while church members listened via their vehicle’s radio from the church’s parking lot.

It wasn’t until the beginning of this year that Holcomb said he and members of his church began meeting and worshipping in the new building. Even then it was limited, with pews roped off to encourage social-distancing and small auxiliary parts of the project still needing to be completed. For example, Holcomb said the church had just recently placed handrails on its new baptistry and had just now moved its piano from the old building, wanting the new building’s walls to be painted first.

“It’s hard to coordinate all those moves,” Holcomb admitted, but noted that the process was worth it. “We’re trying to prepare for the next generation," he added. “I’m 55 years old, I don’t know how long I’ll be here until the Lord leads me somewhere else. As far as building this building, that was the thought, we can’t grow anymore than we were over there and now we’ve got room to grow here.”

The extra room will come in handy this Saturday when the church hosts gospel singing groups Jeff and Pam Sneed, and the quartet The Inspirations beginning at 6 p.m. as part of their Grand Opening Singing. Holcomb said Jeff Sneed had helped organize the upcoming event and helped procure the Inspirations for the singing.

“I knew that he had a connection with The Inspirations,” Holcomb said on Sneed, but also said he wondered if the group would sing at a “little church like this.” Although the group featured a new lineup than the one most quartet fans will remember, Holcomb says the new group stays true to its roots and has gained popularity performing at the quartet convention and traveling to various churches to perform.

“Well sure enough, he (Sneed) talked to them and they were going to be traveling through the very night we were planning on having it,” Holcomb said. “And they said yes.”

As mentioned before, Holcomb believes the event could be huge for his church. He said he’s received calls from folks outside of the region who wanted to know how much tickets were. He told them the event was free and that he hoped to see them there. He also hopes that special member of the church’s congregation, Pearl Marcum, can also make the event. Holcomb said Marcum had been a member of the church since its founding, but that she was getting older now and was unable to attend the church as regularly as she once did.