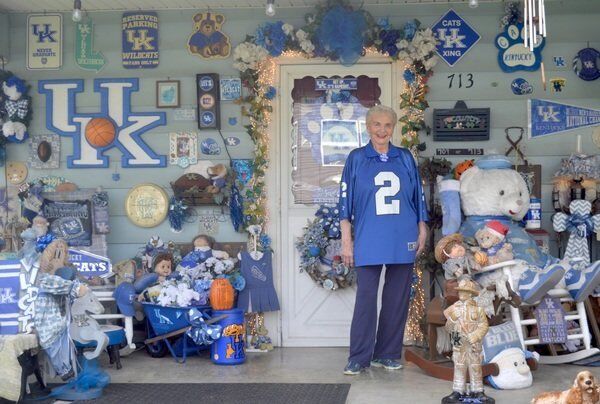 UK fan Bonnie Hicks stands on the decorated front porch of her home, which is affectionately referred to as the UK house by locals. | Photos by Jarrod Mills 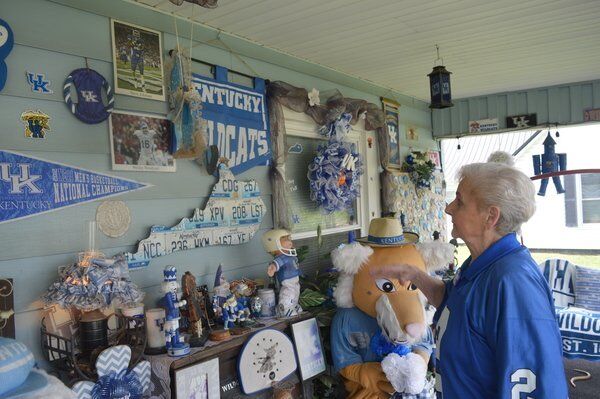 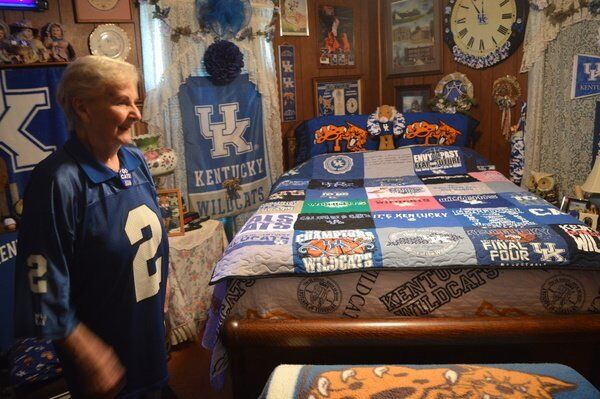 Bonnie Hicks shows off a UK-themed T-shirt quilt gifted to her by a friend. | Photo by Jarrod Mills 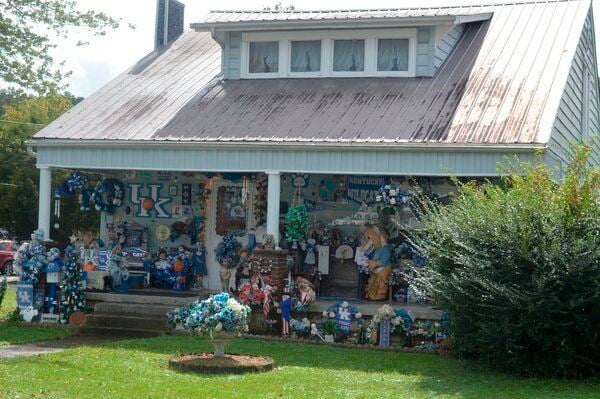 The home owned by Bonnie Hicks in downtown Corbin known affectionately as the UK House. | Photo by Jarrod Mills 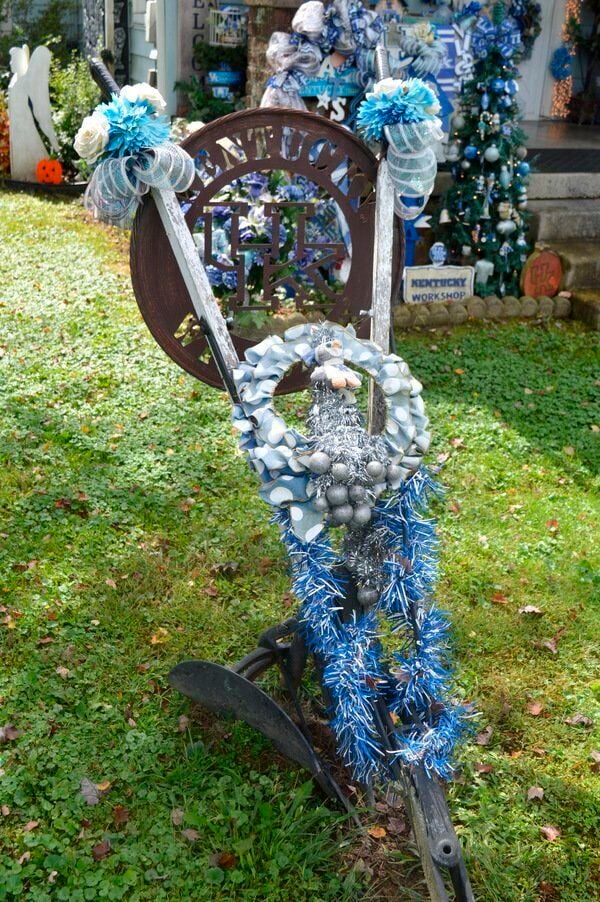 A gardening plow sits in Bonnie Hicks' front yard is just one of many UK-themed gifts she's received over the years. | Photo by Jarrod Mills 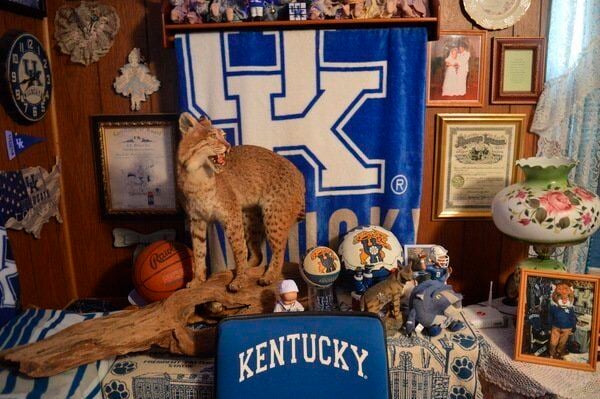 UK fan Bonnie Hicks stands on the decorated front porch of her home, which is affectionately referred to as the UK house by locals. | Photos by Jarrod Mills

Bonnie Hicks shows off a UK-themed T-shirt quilt gifted to her by a friend. | Photo by Jarrod Mills

The home owned by Bonnie Hicks in downtown Corbin known affectionately as the UK House. | Photo by Jarrod Mills

A gardening plow sits in Bonnie Hicks' front yard is just one of many UK-themed gifts she's received over the years. | Photo by Jarrod Mills

CORBIN - Following Saturday’s historic 20-13 win over Florida, fans of the University of Kentucky’s football program rushed onto Kroger Field in celebration. They cheered and sang the university’s fight song as the victory marked the first time the Wildcats had defeated the Gators at home since 1986. And while all of that chaos was happening 90 miles from her house, Bonnie Hicks was celebrating, too - playing UK’s fight song and flashing the lights on her front porch.

Hicks’ front porch, and the rest of her house for that matter, has become an unofficial Corbin landmark. Known as the “UK House” amongst locals, the family home located on the corner of Day and Barbourville Streets in downtown Corbin has seen its fair share of strangers stopping by to snap a quick picture. That’s because Hicks has dedicated her porch and most of her home to her beloved Wildcats.

“I’ve lived in this house for 46 years,” said Hicks. “Ever since I’ve lived here, I started right away putting up anything I got featuring UK.”

Adorned in UK signage, banners, autographed photos, buttons, pins and more, Hicks’ front porch is a testament to her loyalty to Big Blue Nation. Along with the more traditional memorabilia, Hicks’ also has some unique Kentucky-themed items drawing the eyes of passers-by, as well. For instance, hanging on either end of her porch are small tin-men figurines created out of blue-painted cans. A fireplace on her porch built for her by her father is decorated in Kentucky blue and acts as a surface for which more Kentucky memorabilia can sit.

Hicks has acquired her various UK treasures through varying ways. She has a cork-board lined with buttons and pins on her front porch she collected throughout her years of attending UK games. She’s stopped during a trip to pickup her granddaughter up from college in Berea to purchase a handmade UK sign someone was selling on the side of the road. But for a large portion of it, Hicks said she was gifted a lot of the UK items she has on display.

“After I bought this house, I went to work at the bank. It was Corbin Deposit then, but then before I retired it was Cumberland Valley,” she explained. “I worked there for 25 years and all the people that came there, the older people were always wanting me to wait on them,” she added with a laugh. “And then, when they found out I was such a big UK fan, they would bring me stuff all the time.”

Hicks said she had been gifted the gardening plow decorated in blue and white that sits in her front yard and features a UK emblem. Next to her porch is a blue bicycle wheel she said a neighbor had stopped by and gifted.

But the UK memorabilia doesn’t end at the front door for Hicks. In her bedroom she has a stuffed wildcat she was given. Her bed is covered by a gift from a friend - a quilt made from old Kentucky and UK T-shirts. A dresser sits across the room from her bed which holds smaller items like pictures, tickets and other memorabilia. On the wall next to the dresser, Hicks has a framed certificate recognizing her as a previous year’s Kentucky Fan of the Year. And below the picture sits a chair.

“Adolph Rupp,” she said. “That was his chair that he sat in when he was the coach,” she added. “That’s another deal where somebody that knew me went up there when they were cleaning that out and selling stuff, and bought that and brought it back to me.”

Hicks has been a UK fan for as long as she can remember. She said that during birthdays and Christmases she always received UK-themed gifts. She said that when she and her late-husband, Bobby, lived in Ohio for a 17-year stretch, the two would still frequently visit Lexington to catch a Kentucky game.

After moving back from Ohio, and before the first UK item was ever placed on its front porch, the house Hicks now calls home went up for sale. She said she had seen the house while growing up and had always loved it. When it became available, she and six other people had shown interest in purchasing the home. Hicks was ultimately selected and approved to purchase the home that not only features a makeshift museum to the liking of every UK fan, but also features a room dedicated to Coca Cola and its products.

And of course the home features several family pictures and memorabilia. Like pictures of her late son alongside Merle Haggard, who she said her son acted as a bodyguard for. Another picture features her sons as children standing beside Colonel Harland Sanders while in their grandparents' front yard on Master Street. Hicks said Sanders was visiting a chiropractor across the street when the children waved at him, prompting him to come pose for a picture and sign an autograph.

When asked to guess how many UK-themed items she owned, Hicks let out a “Oh gosh” followed by a quick laugh. The truth is, by the time one counted every UK item owned by Hicks, the figure would be outdated as the 82 year old said she keeps busy adding more and working on her collection.

Hicks said she would for sure be watching when Kentucky takes on LSU this Saturday, as the Wildcats hope to extend the start to their perfect season. And while she’ll support them win or lose, should Big Blue win, Hicks - like she always does - will flash the front porch lights on the UK house and Kentucky’s fight song will play throughout the rooms and halls of her home.