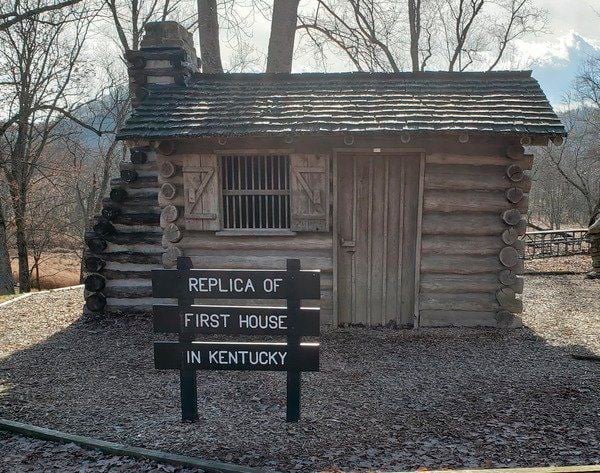 A replica cabin of the one built by Walker's men can be found at the Dr. Thomas Walker State Park in Barbourville. | Photo by Jarrod Mills 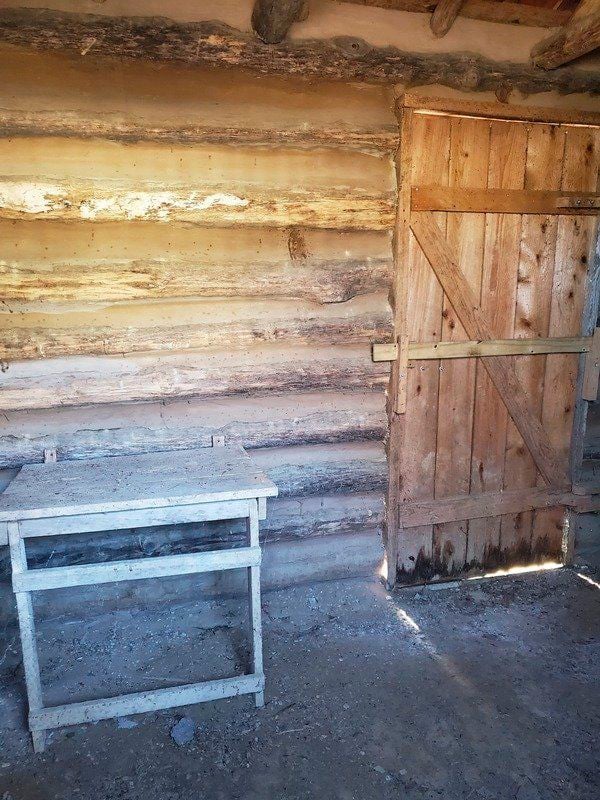 Despite being locked, those interested can peak inside the cabin through a wooden-barred window. | Photo by Jarrod Mills 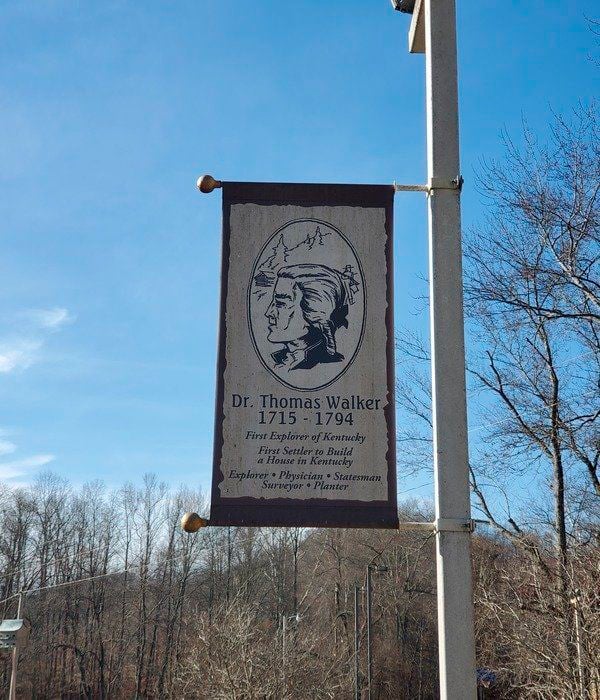 A sign hanging near the cabin honors Walker as the first settler to build a house in Kentucky. | Photo by Jarrod Mills 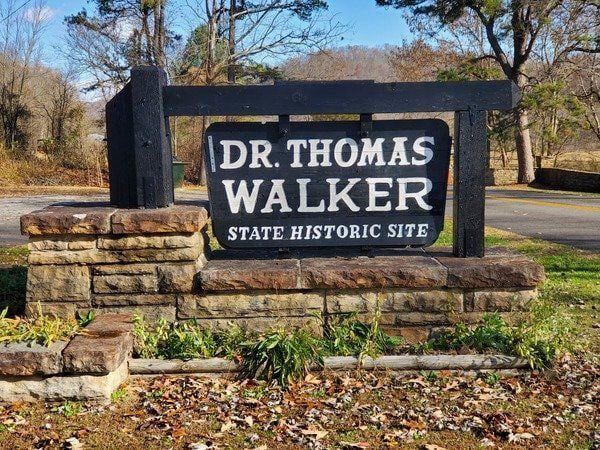 Opened in 1931, Dr. Thomas Walker Park is a tribute to Walker and his group's venture into Kentucky. | Photo by Jarrod Mills

A map of Walker's route through Kentucky can also be found at Dr. Thomas Walker State Park. The route is indicated by the x's. | Photo by Jarrod Mills 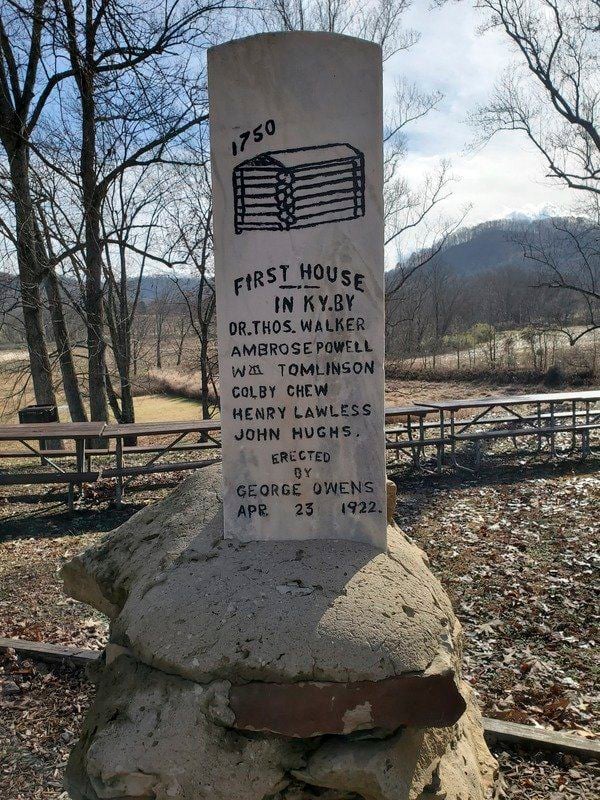 A memorial stands to honor those who built the original first house in Kentucky and to George Owens who built the memorial cabin in 1922. | Photo by Jarrod Mills

A replica cabin of the one built by Walker's men can be found at the Dr. Thomas Walker State Park in Barbourville. | Photo by Jarrod Mills

Despite being locked, those interested can peak inside the cabin through a wooden-barred window. | Photo by Jarrod Mills

A sign hanging near the cabin honors Walker as the first settler to build a house in Kentucky. | Photo by Jarrod Mills

Opened in 1931, Dr. Thomas Walker Park is a tribute to Walker and his group's venture into Kentucky. | Photo by Jarrod Mills

A map of Walker's route through Kentucky can also be found at Dr. Thomas Walker State Park. The route is indicated by the x's. | Photo by Jarrod Mills

A memorial stands to honor those who built the original first house in Kentucky and to George Owens who built the memorial cabin in 1922. | Photo by Jarrod Mills

The structure which was located near present-day Barbourville claimed the land for The Loyal Land Company of Virginia. A replica cabin of the one built by Walker's men can be found at the Dr. Thomas Walker State Park in Barbourville.

Before Walker stepped foot in the Cumberland Gap, the Virginia Council granted John Lewis and the Loyal Land Company 800,000 acres of land on July 12, 1748. The land was to be located north of the western extension of the boundary line between Virginia and North Carolina in the Kentucky area at the discretion of the grantees.

On Dec. 12, 1749, Lewis appointed Walker, who was instrumental in establishing the Loyal Land Company, to inspect the granted land.

“What ended up happening once that expedition was done and as people started coming in, Barbourville became a major center of commerce,” said Marie Sennett of Barbourville Tourism. “What I find interesting is when I tell people I live in Barbourville, Kentucky, people that have lived in Kentucky their whole lives but aren’t from eastern Kentucky, some of them are like ‘I’ve never heard of that.’ It’s like ‘well, if you would have been around in the 1700s you would have known exactly where it was, and what it was.’”

According to Kentucky State Parks’ website, the Barbourville Post of the American Legion became interested in honoring the memory of Walker. After campaigning to make the traditional site of the Walker cabin a state shrine, the American Legion and the Barbourville community donated a 12-acre tract to the state. As a result, on June 20, 1931, the Dr. Thomas Walker State Shrine became a part of the Kentucky State Parks system.

Located at 4929 KY 459 off of US 25 E, six miles southeast of Barbourville, stands a replica cabin of the one built by Walker’s men. The memorial cabin was erected by George Owens in 1922. It is a one-room cabin and was built out of round logs with wide chinked joints and a small end chimney. Locked from the outside, the inside of the cabin can still be seen through a wooden-barred window.

“It’s lovingly attended to. It’s a sight that many school children go to and even though you can’t go inside [the cabin], it is set to where you can see through the window and see the way it originally was,” said Sennett.

Although Dr. Thomas Walker’s venture is often overshadowed by Boone’s, his contribution in the discovery of the Cumberland Gap and his recorded initial findings played a crucial part in the eventual settling of Kentucky and westward. His memory, contributions and claim to Kentucky are forever immortalized in Barbourville’s Dr. Thomas Walker State Park.

In 1749, Walker gathered a team of five other Virginians to assist him on his exploration. Those five men were Ambrose Powell, Williams Tomlinson, Colby Chew, Henry Lawless and John Hughes. The crew set out from Castle Hill, Virginia, the following March in 1750.

After numerous delays due to weather, injuries and illnesses to their horses, Walker and his group reached Cave Gap, now Cumberland Gap, on April 13, 1750.

In his journal, Walker wrote:

“On the north side of the gap is a large spring, which falls very fast, and just above the spring is a small entrance to a large cave, which the spring runs through, and there is a constant stream of cool issuing out… As I went down the other side, I soon came to some laurel in the head of the branch. A beech stands on the left hand, on which I cut my name. This gap may be seen at a considerable distance, and there is no other, that I know of, except one about two miles to the north of it which does not appear to be so low as the other. The mountain on the north side of the gap is very steep and rocky, but on the south side it is not so. We called it Steep Ridge. At the foot of the hill on the north west side we came to a branch, that made a great deal of flat land. We kept down it 2 miles, several other branches coming in to make it a large creek, and we called Flat Creek (present day Yellow Creek). Coal abounds in this vicinity. We camped on the bank where we found very good coal. I did not see any lime stone beyond this ridge. We rode 13 miles this day.”

According to his journal, Walker and the rest of his group continued exploring the area, traveling down the creek five miles along what he called “The Indian Road.” The next day, Easter Sunday, the group continued down the road for seven miles before coming up on “Clover Creek.”

On April 17, in present day Bell County, Kentucky, Dr. Walker first viewed the river he named for the Duke of Cumberland. Known as the “Narrows,” this area became a significant gateway for travelers on the Wilderness Road.

That day he wrote, “Still rain. I went down the creek a hunting and found that it went into a river about a mile below our camp. This, which is Flat Creek and some others joined I called Cumberland River.”

In a letter from Col. William Martin, Joseph Martin’s son, to historian Lyman Draper, William Martin describes the events leading up to the naming of Cumberland River and Cumberland Gap, writing:

“A treaty with the Cherokees was held at Fort Chiswell on New River, then a frontier. On the return of the chiefs home, Dr. Walker, a gentleman of distinction, and my father, Joseph Martin, accompanied them. The Indians being guides, they passed through the place now called Cumberland Gap, where they discovered a fine spring. They still had a little rum remaining, and they drank to the health of the Duke of Cumberland. This gave rise to the name of Cumberland Mountain and Cumberland River.”

Following the discovery of the Cumberland Gap and Cumberland River, Walker led his expedition through several miles of uncharted Kentucky wilderness, coming across the river two more times, miles apart. In his journal Walker noted that Powell was bitten in the knee by a bear during this time.

On April 20, Walker wrote that he found an area of the river to cross. It had been blocking the groups push north. The next day, Walker recorded that the group had finished building a canoe to cross the river. However, the group were forced to stay put as Walker described that weather had turned to thunder, lightening, hail and rain prodigiously.

The following day was sabbath and Walker noted that one of the group’s horses was found unable to walk.

“I then proposed that with two of the company I would proceed and the other three should continue here till our return,” he wrote on April 22. “Which was agreed to, and lots were drawn to determine who should go, they all being desirous of it. Ambrose Powell and Colby Chew were the fortunate persons.”

On April 23 the group forged the Cumberland River and safely reached the other side. Once there, Walker, Powell and Chew continued with their exploration. The remaining three Tomlinson, Lawless and Hughes, were instructed by Walker to stay behind and build a house.

“Then Ambrose Powell, Colby Chew and I departed leaving the others to provide and salt some bear, build a house and plant some peach stones and corn.”

By building a cabin and planting crop, Walker and his group claimed the land for the Loyal Land Company through the use of corn rights.

Corn rights, or cabin rights, entitled a settler to a piece of land so long as they built a cabin and raised crop of any kind, however small, on the land. Laws and requirements varied from colony to colony during those times, but in Virginia a settler was entitled to 400 acres of land and had a pre-emption right to 1,000 adjoining acres.

Walker, Powell and Chew traveled the surrounding areas over the course of the next few days finding it too difficult to navigate.

“The land continuing much same, the laurel rather growing worse, and the food scarcer. I got up a tree on a ridge,” he wrote, adding “and saw the growth of the land much the same as far as my sight could reach.”

On April 28 the three returned finding that Tomlinson, Lawless and Hughes had built the cabin, broken ground and planted corn.

“The people had built a house 12 by 8,” he wrote. “Cleared and broken some ground, and planted some corn and peach stones. They also had killed several bears and cured the meat.”

Two days after reuniting with his group, Walker and his men left the cabin and injured horse behind to travel back to Virginia. They headed north traveling through land near present day London and Irvine.

Walker arrived back home on July 13. In his journal he tallies that the group killed 13 buffalo, eight elk, 53 bears, 20 deer, four wild geese, about 150 turkeys and other smaller game. He also stated the group could have killed three times as much meat, if they wanted. Despite the bountiful food and pristine water — Walker calls a river he finds along the Cumberland Gap the “most transparent I ever saw” — Walker never returned to Kentucky and the land he helped pave a path towards.