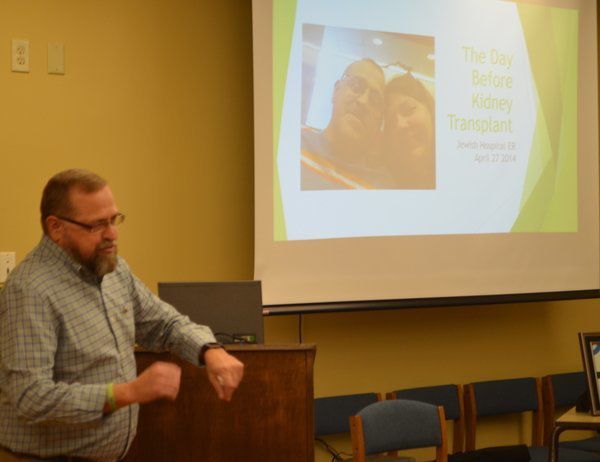 Tim Black, the longest living double lung transplant recipient of cystic fibrosis in the state of Kentucky, shared his story during this month's Noontime Knowledge. | Photo by Jarrod Mills 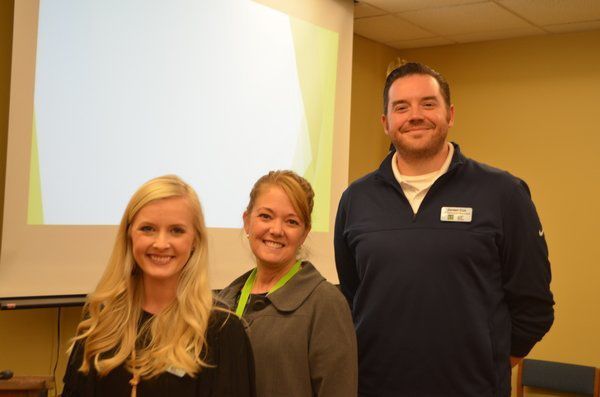 Adrienne Poole, Tracy Colon, and Jordan Cox of KODA were on hand to answer questions, and offer info on organ donation and how to sign up. | Photo by Jarrod Mills

Tim Black, the longest living double lung transplant recipient of cystic fibrosis in the state of Kentucky, shared his story during this month's Noontime Knowledge. | Photo by Jarrod Mills

Adrienne Poole, Tracy Colon, and Jordan Cox of KODA were on hand to answer questions, and offer info on organ donation and how to sign up. | Photo by Jarrod Mills

Tim Black, the longest living double lung transplant recipient for cystic fibrosis in the state of Kentucky, was the guest speaker.

Black, who says he was raised in McCreary County for most of his life, shared his story with the audience. He was diagnosed with cystic fibrosis at an early age.

“It’s a death sentence right from your diagnosis because most people don’t live to be older than 30 right now. But with advancement in medication, that age is starting to creep up,” he said.

Black says he was the poster child for cystic fibrosis.

“I got to be on nationwide TV and some publications throughout the area,” he said.

When he was diagnosed with cystic fibrosis doctors told his mother that he wouldn’t live long enough to attend school.

Black was 27 years old when he became the second double lung transplant in the state of Kentucky on May 26, 1995. His donor was a 15-year-old.

“At that time, they told me the lungs, they’d survive about 10 years, I just celebrated my 24th.”

In 2014, Black had to undergo a kidney transplant because of the medications he was taking.

“I was one month shy of my 19th double lung transplant surgery when I went on dialysis and had to get a kidney transplant.”

Black has since recovered from his kidney transplant operation and says that he and his wife, Linda, started running as a hobby after his surgery. Black says he has started competing in as many 5Ks as he can every year and usually averages about six races.

Black met his wife Linda in the early 2000s. Linda had worked for nearly 25 years at Baptist Health Corbin in the hospital’s outpatient surgery wing.

“She was actually my best friend,” said Black. “We were together just shy of 13 years before she passed away. She passed away on June 9, 2017 from a subarachnoid hemorrhage.”

“One person can benefit up to 75 people; that just amazes me today when I talk about it,” said Black.

Both of Linda’s lungs were gifted at the UK Medical Center in Lexington to one patient, Gracie.

"Tosha on the far end,” he said pointing to a picture on the slide show he used during his presentation, “is Gracie’s daughter. Kind of ironic that Gracie would have one daughter, Linda was an only child. We actually met them on June 16, 2018. which was kind of an ironic day for me because Linda would have turned 45 the day before we met them."

According to Black, Gracie said during her pre-transplant workup, the University of Kentucky actually let her do some pre-testing at Baptist Health in Corbin at out-patient surgery.

“So more than likely, Linda and Gracie had crossed paths at some point when Linda was still alive. She was on the waiting list for almost two years when she received the call and because of modern age, she knew who Linda was before we knew who she was.”

Black then shared some of the experiences he’s been able to have including speaking in front of groups and throwing out the first pitch at Lexington Legends game.

“All of this has been because the family of a 15-year-old was willing to say ‘yes.’ They didn’t want their 15-year-old to just pass away, they wanted to give hope to somebody else."

“There are over 1,000 people here in Kentucky on the waiting list right now,” said Tracy Colon, a nurse with KODA.

Both Colon and Jordan Cox from KODA were on hand to answer any questions audience members may have for health care professionals concerning organ donation.

One of the common myths that KODA and Black want to dispel in this area is the idea that a doctor or medical professional is more likely to let a patient die if they are an organ donor.

“That is a big myth, I’m glad you brought that up,” Cox said to Black. “That’s something that we hear a lot; that is absolutely not true.”

According to data from the Organ Procurement and Transplantation Network, every 10 minutes another person is added to the organ donor waiting list. Twenty-two people die each day because the organs they need are not donated in time. One donor can save up to eight lives, restore sight to two people and heal the lives of more than 75 people.

“In a family’s darkest time, donations really do bring a sense of light and hope. It definitely helps the grieving process. While grieving is never easy, it makes it a little bit more bearable to know that your loved one lives on,” said Adrienne Poole of KODA.

“We have this awesome gift of having Tim here to talk to us today just because somebody said yes,” said Cox. “We talk a lot about legacy, about lasting legacy of these donors, and we do so many things to honor those donors because it is the greatest gift we can give.”

To learn more about organ donation visit donatelife.net. To register to be an organ donor you can visit registerme.org