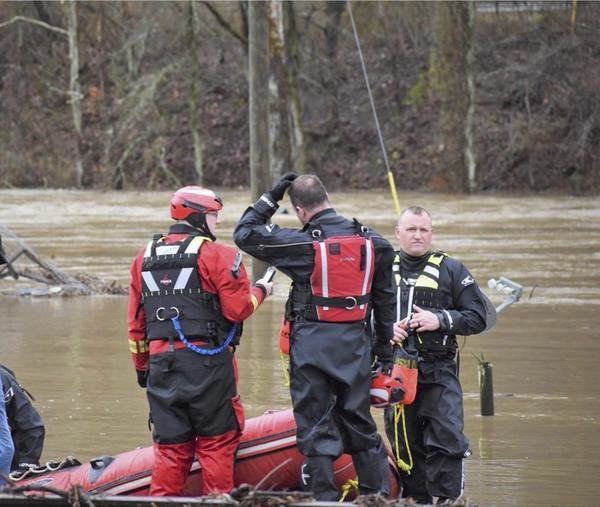 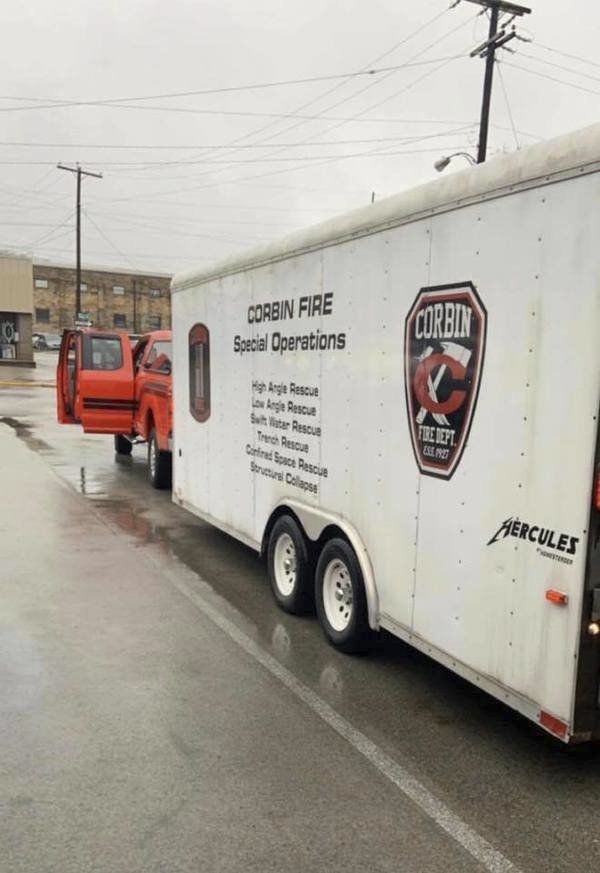 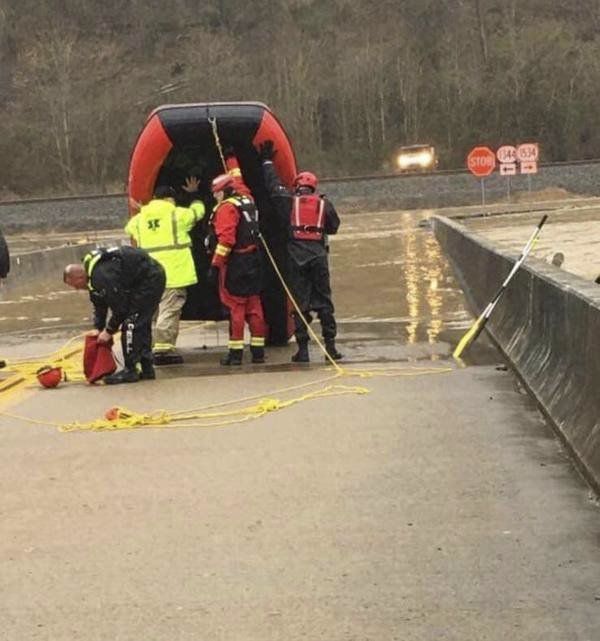 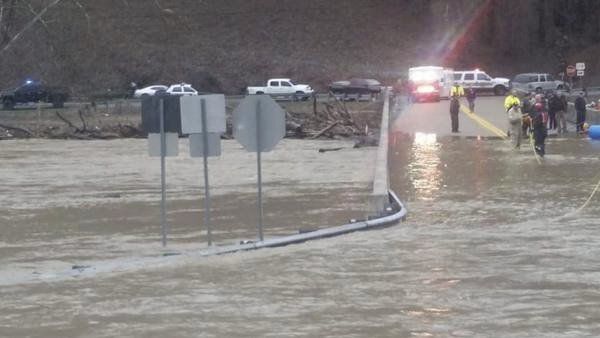 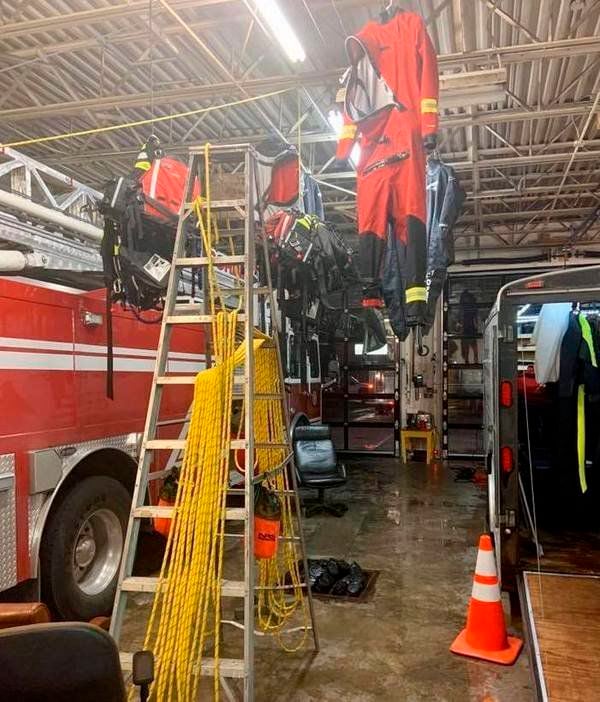 Squad members hung up equipment used during Thursday's rescue to dry upon returning back to their Corbin station. | Photo Contributed 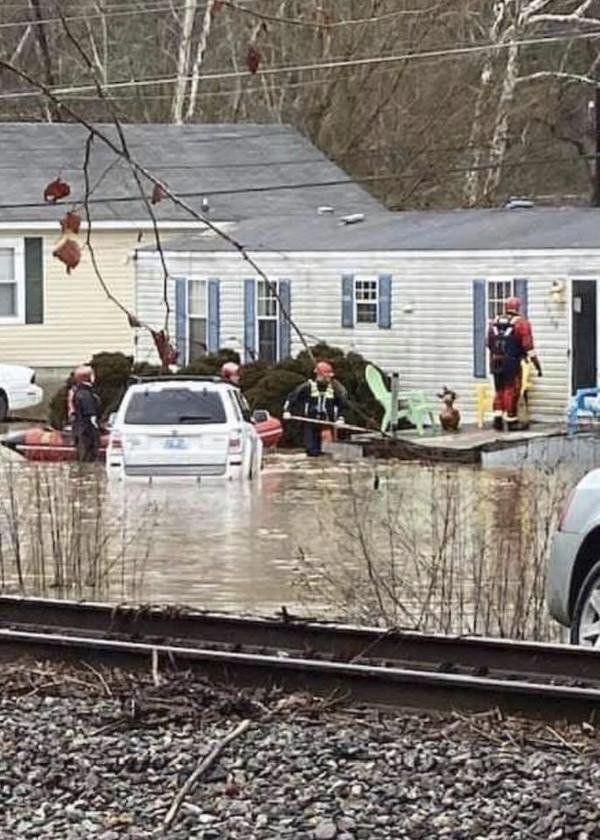 Squad members hung up equipment used during Thursday's rescue to dry upon returning back to their Corbin station. | Photo Contributed

“In my opinion, this is probably some of the worst flooding that I’ve seen,” said Corbin Fire Department’s Captain Eric Philpot after a day of helping neighboring counties rescue their citizens.

Philpot and three other members of Corbin Fire Department’s Special Operations were dispatched to assist crews in Harlan County by the Kentucky Emergency Management at 9 a.m. Thursday morning.

Philpot says he and his crew managed to make it to Harlan County’s Baxter community at around 11 a.m. Once there, rescue personnel were able to save three individuals who had been trapped in their homes.

Philpot says his squad was in contact with 10-15 other people, but that they were either sheltering in place or removing themselves.

“It was pretty difficult to get to where they were at,” Philpot explained. “We actually had to walk the railroad tracks for a couple of miles to get to the houses with the boat and then we could get into the water from there.”

Philpot says that he and the other three responders that assisted the rescues in Harlan County are all swift water technicians.

From Harlan County, Philpot and his squad traveled to Bell County where they met up with three other members of the Corbin Fire Department’s Rescue Squad and assisted the Bell County Rescue Squad.

The two squads met in the Page community of Bell County where they assisted a family of four, including two small children, evacuate their home.

“Once we got them out of their house, the bridge that comes off of [Route] 119 that goes into the Page community, we actually had to remove 10 people there from the railroad tracks to get them across the bridge,” explained Philpot. “I believe they had been there for two hours waiting on somebody to come get them.”

After helping in the Page community, the Corbin Rescue Squad went on to assist rescue personnel in Pineville. The rapid rise of the Cumberland River in Bell County was bad enough that county officials declared a state of emergency, and the city of Pineville closed one of its flood gates for the first time.

When getting dispatched to a rescue scene, Philpot says he and his squad have very little time to prepare a game plan.

“When you come up to the situation with rising flood water, you’ve got to act quick,” he said. “I mean it’s not something you can sit and ponder on for a long time. So, once we get there, we kind of do a quick assessment of the situation that we have at hand. We try to put together something in our minds as a team, and we act on it.”

Luckily, the majority of calls that Corbin’s Rescue Squad responded to yesterday were from people who had called dispatch and asked for assistance.

“Those are pretty simple. You just get there, assess the scene, you try to see if there is any dangers present that’s going to harm us as rescuers, then we go and get them out.”

Philpot said that the best time to evacuate a flood is when you first start seeing warnings. He said trying to wait out the flood or waiting last minute is often what causes folks to become stranded.

“That’s what we’re here for, we’re here to come rescue you,” he said, adding, “but if they can watch the warnings, and see that it's going to affect their house, then that would be the time to try to get to the shelter.”

As mentioned before, Philpot called this some of the worst flooding he’s seen.

Philpot wants to warn those who have to travel over the next couple of days to not drive through standing water on roadways.

As far as Thursday as a whole, Philpot said he and his squad were happy they could help.

“Corbin Fire Special Operations would like to say thank you to the other agencies involved with the water rescues for their hard work, our off duty units that came in to provide coverage for the city, and the City of Corbin for allowing us to assist other communities in need,” the Corbin Fire Department posted on its Facebook page.

Philpot and his squad returned to their Corbin station at around 9 p.m. Thursday night. After a long day of rescuing community members in other counties, the squad cleaned up their gear, stored it away and were ready for a restful night. That rest was cut short however, as they were dispatched to a structure fire in Woodbine at around 2-3 a.m. Friday morning. Just another day in the lives of local heroes.