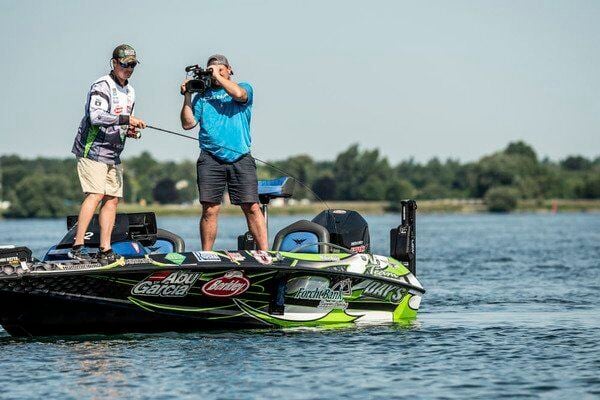 Because of his top-10 position on day two of the tournament, Huff was followed around by a cameraman who filmed as Huff competed. | Photo contributed 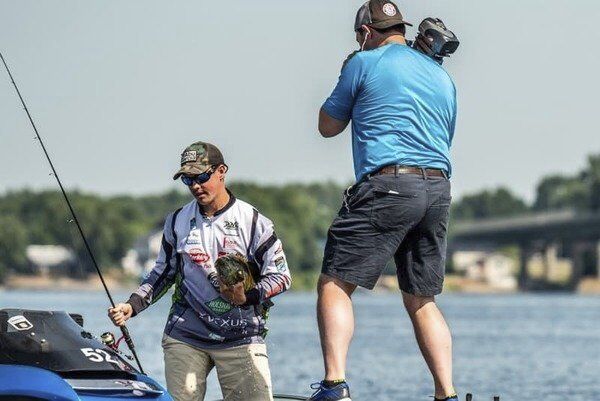 While being filmed, Huff caught a four-pound smallmouth bass, which landed him the tournament's Yamaha Clip of the Day. | Photo contributed 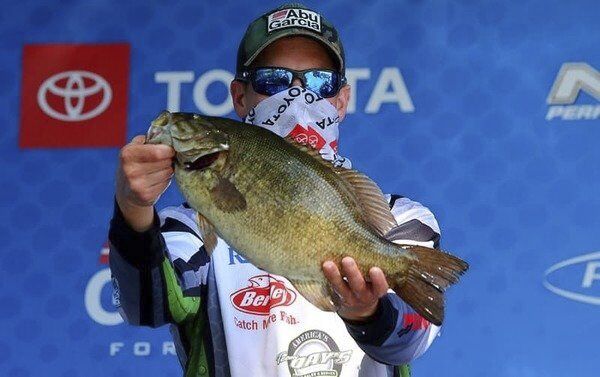 Because of his top-10 position on day two of the tournament, Huff was followed around by a cameraman who filmed as Huff competed. | Photo contributed

While being filmed, Huff caught a four-pound smallmouth bass, which landed him the tournament's Yamaha Clip of the Day. | Photo contributed

“It was good,” Huff said on the tournament. “It could have been a little better. I lost some big ones on the third day that really cost me probably making the top 10, but that’s part of fishing.”

During the three day competition, Huff caught 15 smallmouth bass weighing a total of 53 pounds and 10 ounces, landing him in 22nd place at the end of the tournament. The top-25 finish caps off a competition in which Huff says he needed to perform well.

“I’m happy with the finish, I needed a good finish after my first two tournaments were kind of bad,” Huff said noting how much his experience on St. Lawrence River helped him during the tournament.

“When you go there for the first time it’s really hard to figure out what the fish want and stuff in three days of practice,” noted Huff. “Experience really helped me with this one. It does in a lot of tournaments where I’ve already been to the lake. We went there last year, so I kind of knew going in what I wanted to do, and where some good areas were. The river was fishing a little tougher this year, so I just went back to some areas where I caught them at last year and they were there really good.”

While experience and familiarity are positives for Huff, he - like all of the other anglers in the Bassmaster Elite Series - are having to adapt to changes brought on by COVID-19.

“The tournaments are totally different now,” explained Huff. “We have to be careful. I basically wear a mask all the time, unless I’m out here by myself fishing.”

Changes to the way tournaments are conducted this year include the absence of fans during weigh-ins and participants having to wear a mask while on stage.

“It’s really changed how we do things,” Huff said on the coronavirus and the precautions being taken by tournament organizers. “It’s not as fun, but you know I’m just glad to get to have tournaments. Other sports are still kind of shut down. It’s good to be able to get out here and do it still.”

“They update what’s called BASSTrakk. Whenever we catch a fish, they put it on this app, and people can go on bassmaster.com and check how many we’ve got during the day,” Huff explained. “So it’s really changed that. We have to update that ourselves and we don’t get as many photos and stuff.”

One aspect that hasn’t changed however, camera operators out to following the anglers in the top-10 positions during each tournament.

Huff, who had a strong start at St. Lawrence, had a cameraman following him on day two of the tournament. Coincidentally, this was the second time Huff had been in the top 10 and fishing on camera. The last time it happened was during last year’s tournament on the same river, St. Lawrence.

Huff recalls being nervous his first time on camera during his rookie campaign. He says the nerves got to him a little last year, but this year not so much.

“This time I was a little better prepared for it,” he said. “I just kind of acted like he wasn’t there and just fished and didn’t worry about it. I caught a good one the second day on camera, which was pretty cool.”

While being filmed on St. Lawrence, Huff caught a four-pound smallmouth bass which earned him the tournament’s Yamaha Clip of the Day and can be viewed on YouTube at https://www.youtube.com/watch?v=HMXNC6GMkxI.

In his second season, Huff is sponsored by Berkley and Abu Garcia, who he says has provided him with the fishing reels, rods, and the baits he used to land his top-25 finish. He is also sponsored by Irvine Contracting out of London, who have helped Huff with his travel expenses this season. Huff was also gifted a new Vexus bass boat to use this year by Day’s Boat Sales out of Frankfort.

“It’s honestly the best bass boat I’ve ever been in for rough water and we had some rough water at St. Lawrence,” noted Huff. “It really, really helped having this boat.”

As far as what’s next for Huff, he’s currently getting some last minute work in on Lake Champlain in Plattsburg, New York, the site of the Bassmaster Elite Series’ next tournament.

“I’ve caught some this morning,” Huff told the Times-Tribune Monday. “My family, we used to come on vacation up here a lot, so I do have some experience on this lake. I’ve been several times and had some fishing tournaments here, so that really, really helps in pointing me in the right direction.”

Huff and the other professional anglers will have three days to prepare for the upcoming 2020 Bassmaster Elite at Lake Champlain tournament which is set to kick off this Thursday, July 30 and will finish up Sunday, Aug. 2.