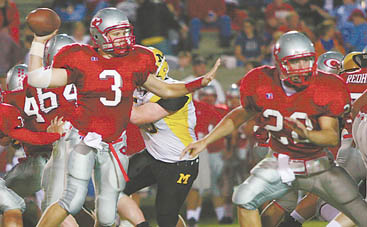 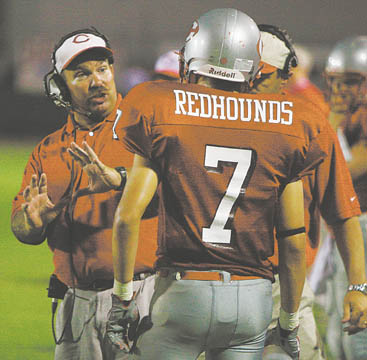 By Chris Parsons / Staff Writer With district play just around the corner for the Corbin Redhounds, Friday’s showdown with Middlesboro (4-1, 1-0) could be a pivotal one. The Redhounds (2-4) are coming off a road win over Pulaski County, so their confidence has risen somewhat according to Corbin head coach Steve Jewell. But he said his team needs to get a “big win” to be able to believe in themselves. “The Pulaski County win gave us some momentum, but then when you look at it, we really played a good game against Bell County,” Jewell said. “Things are getting better for us confidence-wise, but I really think we need to get that big win to really establish ourselves.” That big win could come Friday against Middlesboro, but not if Ken Roark and his Yellow Jackets have anything to say about it. “This is a big rivalry game for us and the community,” Roark said. “It has always been a big game for us and since we’ll be district opponents again next season, that makes things all the more heated. “This is a healthy rivalry and you can throw the records out the door when these two teams play, because they will get at it every time,” he added. As for how to win this football game, Jewell said there are several things his team will have to do successfully. “We have to try and keep their offense off the field,” he said. “They have a real good set of backs and some solid receivers as well.” Middlesboro uses a back-by-committee-type offense. The three options Roark has at his disposal are Casey Earls, Cornelius Ford and Brennan Bowling, who have tallied 1,061 yards on the ground in five games. Though he hopes to limit Middlesboro’s time of possession, Jewell said his defense will have to stay on its toes when they are on the field. “They run that veer-type offense where you have to be alert,” he said. “They have several options to go to and if we can take that away, hopefully it will force them to throw the ball a little more.” When the Jackets throw the ball they are not as successful. Quarterback Trevor Hoskins has completed 37-of-71 pass attempts for 655 yards and nine touchdowns When it to comes to the Redhounds’ offense, Jewell said though he would like to be more productive in the backfield, he feels like things are improving. “I feel like the backs are getting into a little more of a groove of late,” he said. “We are still missing a breakaway guy, but we are getting better. “As far as passing the ball against them, hopefully we can get into some one-on-one situations with our receivers,” he added. “They will send a lot of blitzes on defense, so if we get them the ball and get to that second level, we should be able to use our speed to our advantage.” Though one team is coming off a bye week and the other is heading into one, both coaches agree that their team needs the win Friday. “I really feel like this win can give us a lot of momentum heading into the rest of the season,” Roark said. “It would also give us momentum when we face them next year in district play.” “The way we are looking at it, the season consists of two halves,” Jewell said. “If you look at it that way, we are 1-0 right now and we need to get another win before we head into district play. “To be honest, it would make the off week a lot easier to deal with,” he added. Kickoff is set for 7:30 p.m. at Middlesboro’s Bradner Stadium.