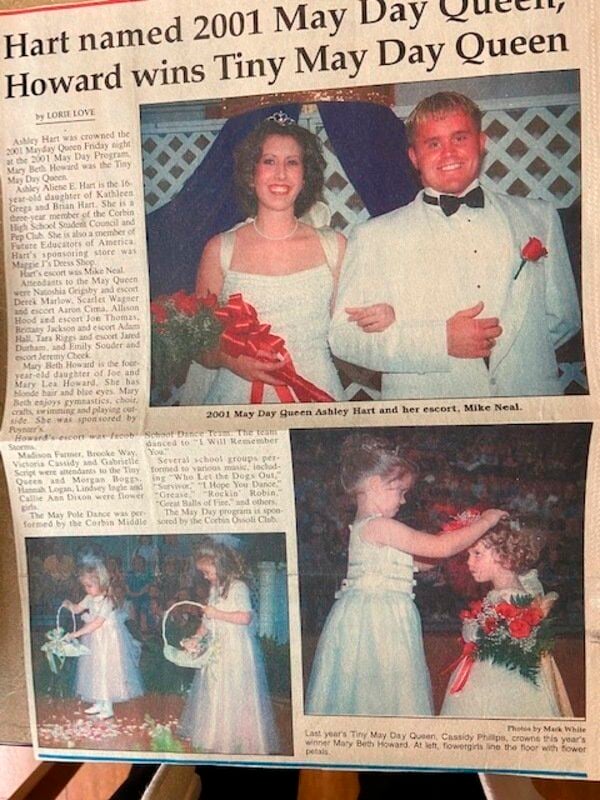 Ashley (Hart) Bryson was crowned May Day Queen in 2001 while Mary Beth Howard was named the 2001 Tiny Queen. | Photo Contributed 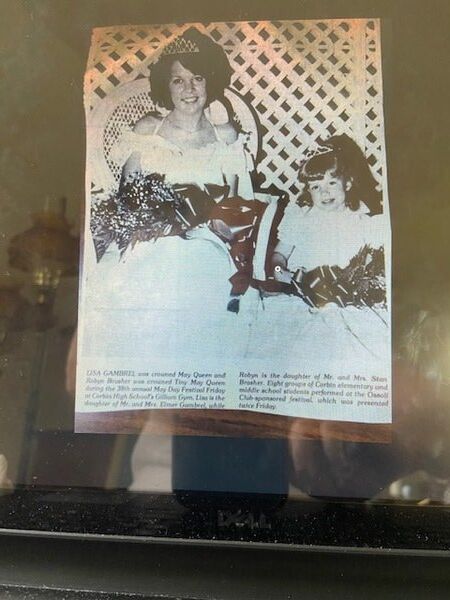 Lisa (Gambrel) Johnson was named the 1981 May Day Queen while Robyn Brasher was crowned the 1981 Tiny Queen. | Photo Contributed

Ashley (Hart) Bryson was crowned May Day Queen in 2001 while Mary Beth Howard was named the 2001 Tiny Queen. | Photo Contributed

Lisa (Gambrel) Johnson was named the 1981 May Day Queen while Robyn Brasher was crowned the 1981 Tiny Queen. | Photo Contributed

As the 2021 GFWC Kentucky Ossoli Club’s May Day Festival is quickly approaching, the Ossoli Club is taking a look back through the decades, celebrating past May Day Queens and Tiny Queens and what May Day means to them.

CORBIN—Growing up in Corbin, Ashley (Hart) Bryson dreamed of one day being named May Day Queen but she never expected that dream to become a reality.

“May Day for me started as a young child, I was in elementary school at Saint Camillus Academy, so I never thought that I would have an opportunity because back then, Saint Camillus Academy students were not eligible for queen,” Bryson said. “So when they shut down the high school and I transferred to Corbin and was chosen to be on court, I was elated. It was the most awesome thing and I never expected it to happen, let alone did I expect to win.”

During that time Bryson was working at the Moo Moo Hut where she left her tip jar by the windows, collecting as much money as she could.

“When I got the call that I had actually won, I was just in utter shock,” she said.

Bryson, who was crowned queen in 2001, said the experience of becoming a May Day Queen was life-changing.

“It was just a really next-level moment for myself because I wasn’t in the spotlight very often and I was just a regular little girl, just floating along, so that for me was a really transitional moment,” she said. “I felt like it just kind of opened doors and paths for me.

“It has came full circle for me because now I am one of the newest members of the Ossoli Club, so now I am also a part of these empowered women and I am able to give back and empower other young ladies in the community and interact with them as well to show them the same pathways and doors and relationships that opened up for me.”

Bryson, like so many other young women who have been a part of the May Day festival, know that May Day is so much more than just wearing a pretty dress and a shiny crown.

Lisa (Gambrel) Johnson, who was crowned May Day Queen in 1981, didn’t realize at the time just how special it was, though.

At the time, Johnson said she didn’t realize how much the money she and the other participants had raised would help others in her community.

“I don’t think I realized at that time how much it helps our community,” she said. “It’s a fundraiser and as my kids got older, I could see these activities that they were involved in that the Ossoli Club was donating this money to whether it be theatre, band, academic team, or in the classroom.”

Johnson said her own children have seen the benefits of the fundraising efforts of the Ossoli Club and May Day participants, as they have been a part of other clubs and activities in Corbin over the years.

“Their fundraising helps the whole community and you don’t realize that until you get older,” she said.

Johnson said that looking back on her time participating in May Day, she now knows just how special it was to be a part of such a longstanding tradition.

The Ossoli Club is featuring other past Tiny Queens and Queens in videos on their website ossoliclubofcorbin.com as they share the weekly updates of the 2021 race.

This year’s 78th May Day Festival is a virtual event because of COVID-19, as was last year's.

The May Day Festival is a fund raising event for the Ossoli Club. All proceeds are used to fund community service projects, and a portion each year is donated to the school classes participating in the program. Even though May Day was a virtual event last year and the school classes weren’t able to participate, the Ossoli Club was still able to donate funds to the classes. Through the years, monetary votes for the young ladies competing for May Day Queen and May Day Tiny Queen have enabled the Ossoli Club to fund or contribute to community organizations, projects, and events. Examples include: Corbin School system’s theater programs, the Carnegie Center, Corbin Cares, Corbin School system’s Family Resource Centers, Team Kentucky, Corbin Public Library, Baptist Health Foundation, Corbin Senior Citizens, the Empty Stocking Fund, and the Lion’s Club.

Members of the business community help publicize the event by posting candidate pictures in their respective businesses.

All donations are tax deductible and can be made by mail or online. As it was last year, there are no “voting boxes” in the local businesses. If you want to donate online, go to the Ossoli Club’s website, ossoliclubofcorbin.com, and select your candidate. If voting by mail, write your check to the Ossoli Foundation, indicate your candidate choice on the memo line, and mail to the Ossoli Foundation, PO Box 2544, Corbin, KY 40702. Fundraising ends at noon on Friday, April 30.

Weather permitting, on May 8, at a time to be announced, there will be a parade of the Queens and their courts through downtown Corbin.