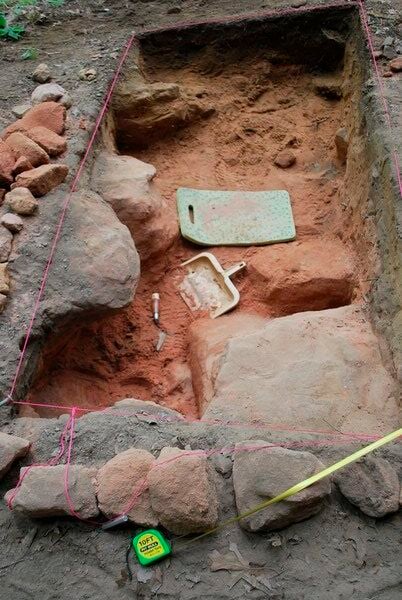 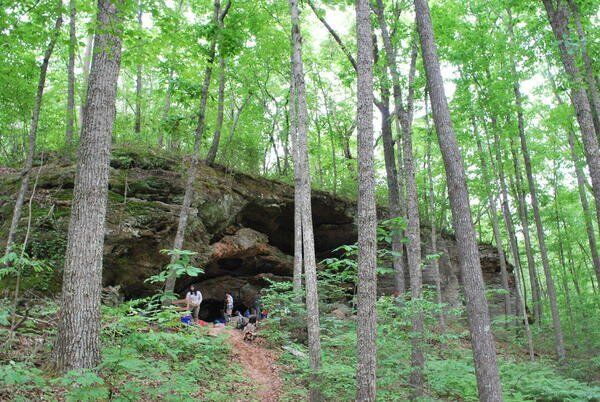 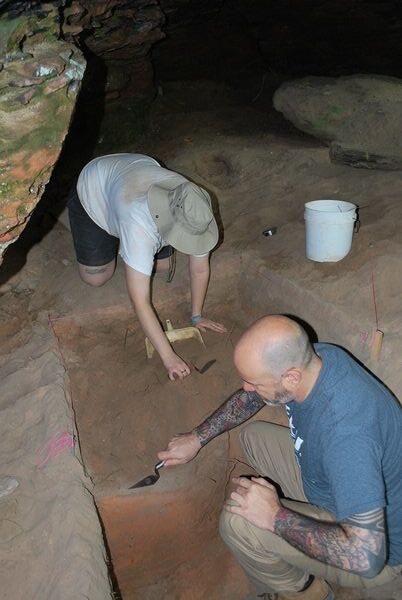 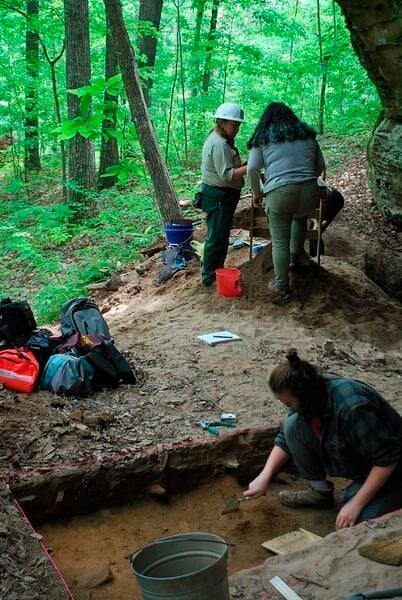 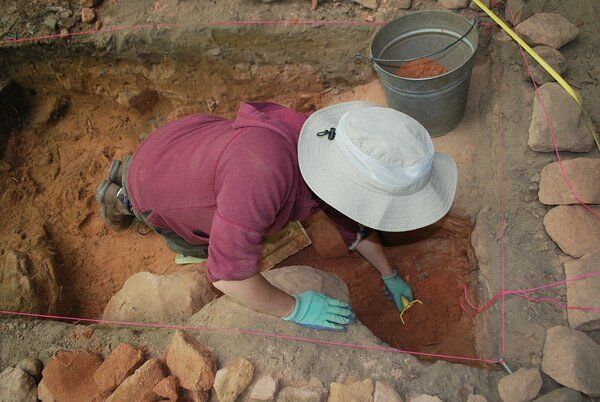 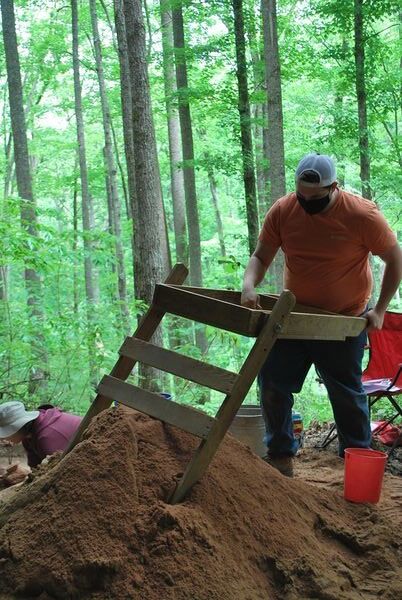 WINCHESTER — Tucked away in the densely forested woods near the small community of Sandgap, a team of budding archaeologists have been at work unearthing fragments of the Daniel Boone National Forest’s past. Starting in late May 2021, archaeology students from Eastern Kentucky University (EKU) spent four weeks carefully excavating, documenting, and preserving artifacts and archaeological features in a rockshelter on the London Ranger District.

“The site selected for excavation has been damaged by illegal digging [looting] in recent years, so we were worried that the valuable history preserved there had been lost,” said London Ranger District Archaeologist Mary White. “Fortunately, the team uncovered many remaining artifacts and features. Their work during this year’s field school helps [the Forest Service] document the site’s remaining history and helps us all better understand how early Native American peoples used the site and surrounding area.”

The field school team consisted of White, EKU Archaeology Professor Jon Endonino, and the 13 members of Endonino’s archaeological field methods class or “field school.” For the past several years, the Daniel Boone National Forest has had an agreement that supports biennial field schools on Forest lands. This agreement is a natural extension of the U.S. Department of Agriculture, Forest Service’s mission to preserve and manage these historic sites as well as encourage career paths in resources stewardship.

“We are grateful for our partnership and the opportunity for our students to put their academic skills to the test in the field,” said EKU Archaeology Professor Jon Endonino. “Field school is an opportunity for students to apply the knowledge and concepts learned in their prior coursework while also collecting data in a scientific and controlled fashion, employing critical thinking skills in analyzing and interpreting data, and building “soft” skills, like working as part of a team.”

Previous field schools in the area have found artifacts like burned seeds, food remains, broken pottery, and stone tool flaking debris. They have also found non-portable artifacts, also known as “features,” like stone-lined earth ovens, hearths and fire pits, and refuse disposal pits. These finds help us understand how early Native American residents of the area interacted with their surrounding landscape and lived on the land.

This year’s field school unearthed major finds including a stone tool manufacturing area that produced more than 6,000 pieces of flaking debris and more than a dozen identifiable stone tools from the Early Archaic period of 8,000-9,500 years ago. The team also excavated a variety of features such as hearths, stone-filled earth ovens, and refuse disposal pits.

“Many of our most exciting finds are features that are often the first to be destroyed by looters,” said White. “When first excavated, the ovens and hearths at this site just looked like natural areas of darker sediment. It was only because of the team’s training and experience that we knew to look for the occasional fragment or residue that told us what those dark areas actually were.”

It is finds like these that highlight the importance of respecting Forest rules and regulations that protect rockshelters. The shallow cave-like openings naturally create time capsules that are sheltered from wind and rain. Rockshelters are unique spaces that preserve small and fragile archaeological artifacts and features and also serve as habitat for many species. With these special aspects in mind, the Daniel Boone National Forest does not allow camping or fire making within 100 feet of the base of any rockshelter.

“This year’s field school was a great success despite the history of looting at the site,” said White. “But, really, we got lucky. With many severely looted rockshelters like this one, the history preserved at the site is often lost forever. The best way to ensure that future generations can learn from our past is by leaving the excavation of heritage sites like rockshelters to trained archaeologists.”

Billy Ray Jones, 76, a veteran of the Vietnam War and longtime resident of Corbin, passed away September 16, 2021, surrounded by family. Arrangements by Vankirk-Grisell Funeral Home, where messages may be written at vankirkgrisellfuneralhome.com

Harold Ray Barton Sr., age 72, of Engineer Street, Corbin, Kentucky departed this life on Sunday, September 19, 2021 at Baptist Health in Corbin, Kentucky. He was born on March 18, 1949 in Whitley County, Kentucky to the late Carl and Mae (Davis) Barton. In addition to his parents, he was al…