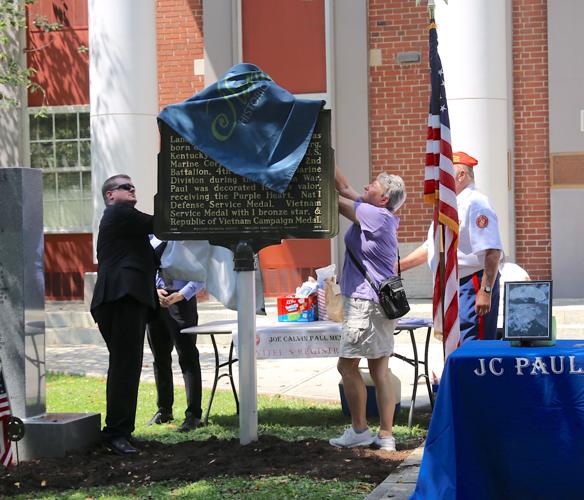 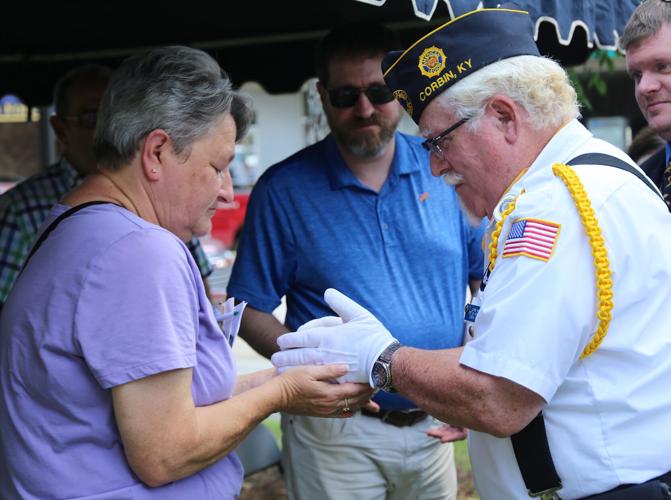 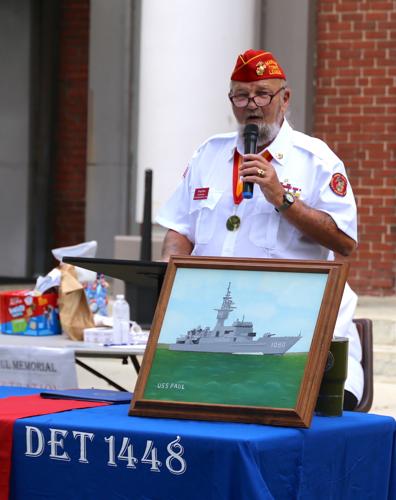 WILLIAMSBURG — It was a somber yet joyous occasion as the family of the late Joe Calvin Paul joined local dignitaries on August 27 to unveil Paul’s historical marker at the Whitley County Courthouse.

It was a day long in coming as Greg Sims, Commandant for the J.C. Paul Detachment, Marine Corps League, recounted the efforts he and his wife Cathy undertook to honor Paul after they retired to Williamsburg a decade ago.

It began with Sims wondering who Paul was after seeing a sign designating the portion of KY 92 through Williamsburg as the “Joe C. Paul Memorial Highway.”

What he found was a story defining heroism. Paul was born in Williamsburg on April 23, 1946, but moved to the Dayton area with his family at the age of 14. It was there where Paul would enlist in the United States Marine Corps. Lance Corporal Paul wasn’t four months past his 19th birthday when his platoon suffered heavy fire in Chu Lai, Vietnam, on August 18, 1965. With five comrades wounded, LCpl. Paul placed himself between them and the Viet Cong so that the wounded could be evacuated. Paul delivered suppressive fire until he himself was critically wounded; he would die the following day. His Medal of Honor was presented posthumously to his parents in February 1967.

Though he was the namesake for USS Paul as well as other honors, Sims felt LCpl. Paul should have more recognition in his hometown. His efforts involved additional highway signage that would identify Paul as a Medal of Honor recipient. Sims and his wife also launched the local Marine Corps League detachment named in Paul’s honor.

“By this time, I had met many longtime residents and a few distant relatives of Joe only to realize there was nothing in town to memorialize him,” Sims said.

With the verbiage on the highway signs not exactly what he wanted, Sims turned his attention to getting a marker from the Kentucky Historical Society.

“It’s been a long time coming,” KHS Community Engagement Coordinator Dr. James Seaver said. “It is not an easy process to get a historical marker put up on the landscape. It’s been made significantly more difficult due to the recent pandemic and the upheaval it caused. Through it all, Greg stayed determine to see this thing through and we’re grateful for that.”

Dr. Seaver noted that supplemental information on Paul’s marker will soon be available through the KHS website and smart app. Since the community-driven program began in 1949, there are more than 2,300 markers throughout Kentucky.

“He was a kid from southeastern Kentucky,” Judge Ballou said. “He lived part of his life in Ohio, joined the Marine Corps and found himself … in a rice paddy in Vietnam on a hot August day in 1965 — well trained, highly motivated but there’s only so much you can do to prepare for that situation that he found himself in.… I can promise you this kid was afraid but his love for his brothers was bigger than his fear.”

Nathan Beasley, a cousin, spoke on behalf of Paul’s family.

“The stories and example that Joe Calvin left taught me honor, self sacrifice and loyalty,” Beasley said, “and what they truly meant. They helped mold me and lead me into the man I am today, the man who eventually joined the military. We as a family have a responsibility to ensure that his legacy will not be forgotten and more importantly keeping that legacy alive every day.”

“Without them, we wouldn’t have been able to purchase this sign,” Sims said.