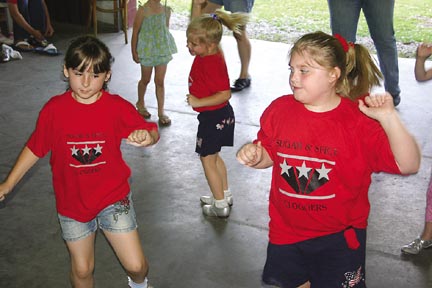 Chelsea Bush, left, and Michaela Hopper, dance to the beat during a Sugar and Spice practice. 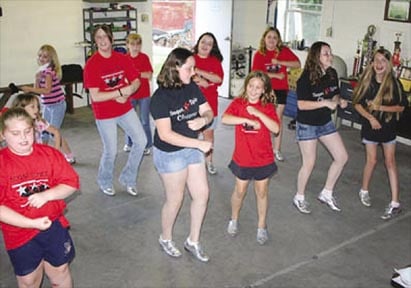 Chelsea Bush, left, and Michaela Hopper, dance to the beat during a Sugar and Spice practice.

It’s not tap dancing. It’s no longer just county fair entertainment. What clogging is, is uniquely Kentucky; particularly after the Appalachian pastime was named the official state dance in April. Longtime clogger and instructor of the Corbin Sugar and Spice Cloggers Rebecca Cassidy-Lankford said the dance has often been ignored. Not only is it good, clean fun, it’s also a healthy activity for children and adults alike. “It’s really good for everyone,” Cassidy-Lankford said. “I think one of the best things about clogging is that it keeps kids out of trouble. It keeps them busy and it’s a fun thing they can do with their family and friends.” According to American Fitness magazine, clogging is great exercise. The fast-paced footwork burns approximately 400 calories in an hour. Clogging has been shown to improve blood pressure, endurance, strength, lung capacity, muscle tone, flexibility and coordination as well as acting as a stress reliever, the magazine said. Cassidy-Lankford said she and Jake Pennington formed the Sugar and Spice team more than 20 years ago. The two danced as a pair for years before the cloggers’ parents began teaching others the art of clogging. At 16, Cassidy-Lankford took over the clog team and the group has continued to grow. Cassidy-Lankford now teaches clogging not only in Corbin, but in Harlan and Richmond as well, she said. “Between the three cities I have over 90 dancers,” Cassidy-Lankford said. “In Harlan my oldest is 72. I take them as young as 18 months.” Sugar and Spice Clogger Angie Paul said she began clogging when she was 13. “I lived in the housing projects and they offered it for free to the kids who lived there,” Paul said. Now an adult, Paul said she has clogged her way through pregnancies and enjoys the opportunity to clog with her children. Nine-year-old Victoria Cassidy said she practices her moves every day. Victoria Cassidy said she was surprised when clogging was named the state dance, but she and cousin Kendra Cassidy said they’re glad the dance is getting some respect. “It’s something to be proud of,” Kendra said. The teams travel nearly every weekend to perform at competitions, clogging festivals, and other local venues such as NIBROC and London’s World Chicken Festival. Cassidy-Lankford said after the groups perform, many times people approach her about how to get involved in the dance. In addition to the regular classes and competitions, Cassidy-Lankford also teaches at local schools and does presentations about how clogging is a part of Appalachian culture. Her newest venture is a Sugar and Spice day-care center in Corbin where she teaches clogging to the children attending the learning center. Cassidy-Lankford hopes to construct a building behind the center to make more room for the cloggers. “I just think clogging has been a part of a lot of people’s culture,” Cassidy-Lankford said. “It is made up of a lot of different styles of dance. It has changed a lot over the years and does represent the culture very well.” For information on how to get involved in clogging, call Cassidy-Lankford at (606) 526-5848. Kelly Foreman can be reached at kforeman@thetimestribune.com.